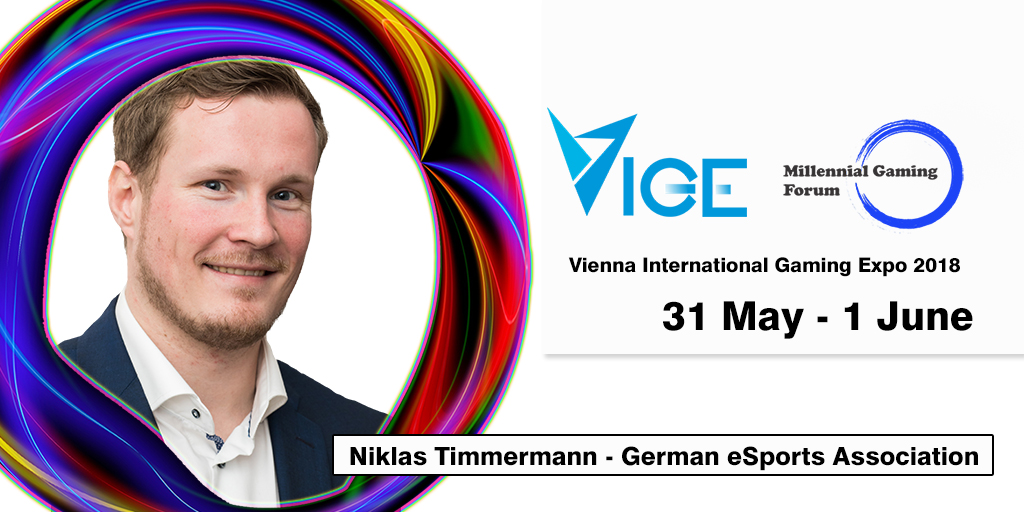 My latest interviewee is going to be among the speakers of the Millennial Gaming Forum 2018 (part of Vienna International Gaming Expo 2018), you can read more about the event here.

Niklas Timmermann is a 30 year old lawyer from Osnabrück, Germany who has been involved in Professional eSports since 2003. Niklas is the Former World and European Champion in Need for Speed for Teams such as SK Gaming, Mousesports and Alternate Attax. He is currently working as a eSports consultant and being first vice president of the german eSports association ESBD.

We are very grateful for your generosity to answer our questions. First I would like to ask you to shortly introduce yourself and the company you represent, and tell us when and why you started working in this industry.

Niklas: Hey everyone! My name is Niklas Timmermann and I started working in eSports back in 2003 when I started my career as a Need for Speed player. 2004 I became Need for Speed world champion and used to play until 2010 for teams such as SK Gaming, Mousesports and Alternate aTTaX. Back then I ended my professional career due to my studies and switched into the backoffice at Alternate aTTaX until 2017. Today I am working as an eSports consultant for endemic as well as non-endemic brands with my company E-Native. Meanwhile I am the vice president of the German eSports association ESBD and responsible for the professional teams inside this organisation.

Most commonly eSports take the form of organized multiplayer video game competitions. The video game culture has changes a lot recently and many game developers design their games targeting a professional eSport subculture. How do you see this issue, what is your opinion about the professional players, the competitions, championships?

Niklas: First of all I do enjoy both online and offline gaming experience which is why I do see the diversity within the different genres of games as a key to the growth of the industry. As a former professional gamer I have to say that I love the thought of having my favorite game eSports ready, unlike several titles on the market right now. If you just take a look at FIFA, which in my opinion is artificially hyped, you do see a title without a proper way of observing the games which makes it practically not eSports ready. The readiness of a game for eSports will work as a catalyst to have a bigger impact on how often a game will be bought and how early professional tournaments will take place. Furthermore professional scenes may evolve and solidify easier, too.

You have extensive experience in eSports both as a professional player and as first Vice President of the German eSports Association ESBD. What is your opinion about eSports in Europe and particularly in Germany?

Niklas: In Germany we are actually 2-5 years behind the Nordic countries when it comes down to eSports. We are lacking grassroots amateur eSports which fuels the pro scene with young talents and the resentments versus shooters make it harder to develop professional structures since CS:GO is actually one of the biggest titles over here. Furthermore the pro scene is also affected high social taxes which make it hard to compete on an international level. We would need a lot more first movers and open-minded decision makers to develop a scene that is able to compete.

What do you think about the future of eSports, what are it perspectives?

Niklas: I guess many of the football teams will start to be a bit more open-minded concerning their choice of game titles. As I have already mentioned FIFA is kind of a blowfish and does not sufficiently represent the diversity and the potentials of eSports. I also see a shift of power in favor of the emerging national associations who will have an impact on how tournaments will run in the near future.

Which were the most difficult periods in your career so far and what do you consider your biggest success?

Niklas: My personal Waterloo took place in Singapore 2005 where I came as defending world and euro champion to the world championships and dropped out in semi final due to an awful mistake while being in the lead. That mistake actually haunted me for years, I even dreamed of that one a few years later. My biggest success was not becoming world champion but actually being able to put up a CSGO team winning the ESWC. While being low on resources we were still able to compete with great teams and being a manager includes a lot more responsibilities than being a player.

Please tell us about your plans for the future in your professional life?

Niklas: My biggest plan is to develop both my company as well as the ESBD into sustainable projects that will shape the German eSports in several ways.

Finally, I would like to ask you a personal question: where would you travel the most in Central Europe? What would a perfect holiday be for you?

Niklas: Due to my career as a player as well as a manager I have had the great opportunity to visit several countries in Europe. My favorite was actually Italy for having the best kitchen of all! I would enjoy seeing new places and trying new food.

If you want to meet Niklas in person or networking with the biggest names of the eSports, DFS, Virtual Sports and Crypto industry, make sure you attend the Millennial Gaming Forum 2018 which is part of Vienna International Gaming Expo.

With this occasion, I would also like to thank you for following my interview series and for sharing these information with your colleagues and partners. If you would like to be featured in an upcoming interview, please send me an e-mail to [email protected] and I will happily get back to you!