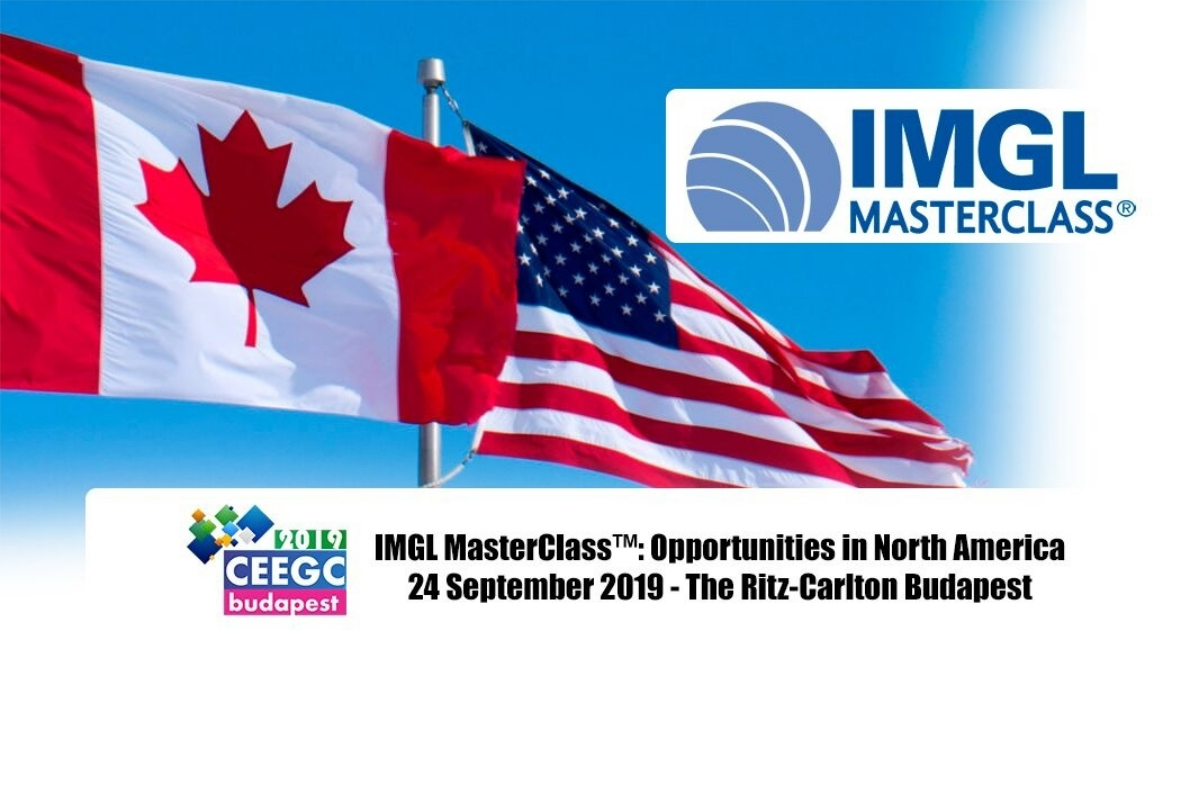 North America (USA and Canada) in the focus via a special IMGL MasterClass™ at CEEGC2019 Budapest.

There are over 1000 commercial casinos in North America and they generate approximately $29 billion in revenue each year. These include casino gaming establishments situated in the United States, Canada and Mexico. These numbers do not include the online gambling industry which is currently being legalized in state by state in the USA.

In a recent report, we can see that the online sports betting is gaining a lot of trend. Thirty-eight million American adults—15 percent of the U.S. adult population—are planning to bet on National Football League (NFL) games this season, according to a new survey by the American Gaming Association (AGA).

The rapid expansion of legal sports betting has provided increased opportunity for millions of Americans to bet safely with a licensed, regulated sportsbook. This year, 7 million Americans say they will bet legally at a casino sportsbook, 1.2 million more than last year, and tens of millions of others will place bets with friends, participate in pools or squares contests or place their bets online.

In Canada, a fresh report showed that at the end of the first quarter of the 2019–2020 fiscal year, Loto-Québec is reporting total revenues of $656.1M and a consolidated net income of $337.4M.

Most noted is the fact that revenues from the online gaming website—lottery and casino games combined—grew by $5.6M (+23.8%).

During the 2019 edition of CEEGC Budapest, which will take place on the 24th of September, a panel of experts from the USA and Canada will join the IMGL MasterClass™, which has been strategically titled as “Opportunities in North America”.

Some of the biggest names of the online and land based gambling industry from the USA and Canada will take part and the organizers are honored to announce them.

The discussion will be moderator by IMGL Member, Jaka Repanšek (Media and Gaming Expert).

You can view the profile of each speaker bellow:

Jeremy Kleiman focuses his practice on gaming, regulatory and business law, representing casino operators, gaming equipment suppliers, technology providers and financial institutions involved in the gaming and lottery industries. He specializes in gaming-related corporate, regulatory, licensing and compliance matters, with an emphasis on the online and mobile gaming industry.

Prior to rejoining the firm, Jeremy served as Executive Vice President, Regulatory & Business Affairs for Coastal Development, LLC, a developer, investor and operator in casino resorts and racetracks. In that role, he was responsible for the company’s legal affairs, government relations and compliance functions, as well as sourcing, negotiating and executing on a number of business transactions. Jeremy’s background and experience on the business side of the gaming industry uniquely positions him to counsel and advise clients on transactional and regulatory matters while understanding the clients’ business objectives.

Jeremy had previously been a member of the Firm and head of its Gaming Law Practice Group prior to his time at Coastal Development. He advised financial institutions, gaming equipment manufacturers, lottery providers, and casino operators on all matters related to licensing, compliance and other regulatory matters.

Jeremy is a co-founder and director of iDevelopment and Economic Association (iDEA), an industry association seeking to grow jobs and expand online interactive entertainment business in the United States through advocacy and education.

With a prominent career in state and federal public affairs, William J. Pascrell, III ESQ more commonly known as BPIII, is a partner with the Princeton Public Affairs Group, Inc. BPIII has worked as Counsel to the Governor of New Jersey, Chief of Staff for a member of Congress, and was Passaic County Counsel from January 1998-2019 with support from both sides of the political aisle. As County Counsel, BPIII drafted and worked to get the Freeholders to adopt the toughest ethics code in New Jersey. BPIII has held various positions on political campaigns at the federal and state level including New Jersey Governors James Florio, Jon Corzine, and Dick Codey. Additionally he has worked at a senior level on the Presidential campaigns of Bill Clinton, Al Gore, John Kerry, Hillary Clinton and Barack Obama.

BPIII is a founder and sits on the Board of Freedom Bank, a federally and state chartered New Jersey bank. Along with these distinctions BPIII also serves on the Board of Directors of the NJ Community Development Corporation, Habitat for Humanity, Juvenile Diabetes Research Foundation, North Jersey Country Club and the United Way of Passaic County.

In 1991 BPIII was selected as a delegate to the American Council of Young Political Leaders exchange program to Hong Kong, Taiwan, and China. In 1992 he was also a Leadership NJ Fellow.

BPIII has worked on behalf of many industries in both Trenton, New Jersey and Washington DC including Pharmaceutical, Petroleum, Energy, Transportation, Law Enforcement, Health Care along with major development projects.

Most notably BPIII lead a multi-year campaign to pass the New Jersey On Line Gaming Act recently signed into law by Governor Chris Christie. BPIII is also a member of the GiGSE (Global Internet Gaming and Sports Experts) Board of Advisors.

BPIII is also Executive Director of the newly formed AI2G American Institute for i-Gaming which was founded to promote legal, regulated Internet gambling at the state, tribal and federal levels through education, research advocacy and outreach to government and other key stake holders in the United States.

BP3 spearheaded the strategic alliance between H2 Gambling Capital and Princeton Public Affairs Group, Inc. (PPAG). The alliance merges H2 Gambling Capital, the leading authority regarding market data and operator intelligence in the gambling industry globally, with PPAG, the leading strategic advisory, government and public affairs, legal services and communications firm in the US gaming industry. This alliance will promote and support this joint ventures unique, global and leading-edge professional services in the US. The alliance will leverage BP3’s credibility and extensive direct hands-on experience with respects to the US sports betting industry to deliver the highest quality market data and operator intelligence to the emerging regulated sports betting marketplace.

The political web site, Politics NJ, named BPIII in their Power List of top 100 political players in New Jersey. In 2003, NJBIZ magazine featured Bill in their annual Forty Under 40 edition. For the past 10 years, NJBIZ has recognized 40 young men and women for their outstanding contributions to the New Jersey Business Community. BPIII is the star of the weekly show “The Battling Bills” which is on every Sunday on Comcast CN8. He is also a regular political commentator on talk shows like “It’s Your Call” with Lynn Doyle, “Diner Politics” with Laura Jones, News 12’s “Power and Politics” and has participated in live Court TV Internet discussions. In 2005 BPIII was nominated for a Mid-Atlantic Emmy award for performance on the “Battling Bills” weekly national political show.

With deep sector expertise, Ilkim has the speciality and insights clients’ need to navigate the diverse challenges and opportunities facing the global gaming industry.

Ilkim Hincer is a partner and Head of the firm’s Gaming, Lottery and eSports Group, specializing in gaming and related technology law. He has profound experience advising local and multinational clients in compliance, regulatory, risk mitigation and transactional matters in the commercial gaming industry. His broad array of clients operate in internet gaming, casinos, bingo gaming, lotteries, eSports and related sectors.

With over a decade of experience both in-house and in preeminent law firms, he has an intricate knowledge of gaming legislation framework in local and global economies. Prior to starting his private practice in 2015, he served as Vice President and General Counsel at Trilliant Canada Gaming, General Counsel and Chief Compliance Officer for the Canadian subsidiary of Penn National Gaming, and General Counsel and Corporate Secretary of the British Columbia Lottery Corporation.

Given his experience on both sides of the table, Ilkim is considered a trusted advisor to his clients and is their first call for matters such as establishing compliance regimes, managing internal controls, and navigating Canada’s anti-money laundering and “conduct and manage” requirements. He also focuses on Indigenous gaming interests, with a proven ability to engage with diverse stakeholders, balance interests, and achieve favorable results for his clients.

Andrew Cochrane is Chief Commercial Officer for SBTech, the leading platform solutions provider to the sports betting and iGaming industry. He has worked across retail gaming, iGaming and sports betting sectors and has a proven track record of managing top-tier omni-channel operators in regulated markets. In his role at SBTech, he is responsible for cementing the company’s preeminent position in the industry by defining strategic objectives, identifying opportunities for further growth and maximising revenues across the board, contributing to SBTech’s ongoing global expansion. He is leading SBTech’s U.S. go-to-market strategy.

Jaka has worked for various TIME (Telecom, Internet, Media, Entertainment) companies since 1996. He is recognized as one of the leading experts on gaming, media and digital law in Slovenia. Jaka graduated from the Faculty of Law at the University of Ljubljana, Slovenia and gained his graduate degree from Cambridge University in England and Faculty of Law in Ljubljana (Diploma in European Community Law) and completed two-year MBA graduate studies at the University of Kansas in the USA. Jaka is an active member of IMGL (Slovenia) and a member of several other domestic and international organizations and is active also as a lecturer in various seminars and conferences.

About the Central and Eastern European Gaming Conference

The Central and Eastern European Gaming Conference and Awards (CEEGC & CEEG Awards) has been launched in 2016 with the aim of bringing together gambling industry professionals, executives, and government representatives.

Every year, +125 like-minded delegates have the opportunity to discuss collaboration opportunities, learn about compliance updates and harvest the tech & marketing related information which is presented by industry leaders from the ever-evolving international gambling industry community.

About the organizer, European Gaming Media and Events

European Gaming Media and Events is a leading media and boutique event organizer company in Europe and produces the prominent conferences in the region such as:

The live events/conference division is in charge of organizing boutique style executive gaming events that focus on bringing inside information from the top gaming experts in the European Union and beyond.

In short, they cover most areas of Europe with international events that serve the local and global industry, optimize networking opportunities and bring the hottest topics into scope.

The event destinations in 2019 will include a further expansion for the company in their quest to enter the Western European region and bring their expertise to produce local gaming events.

For more details about the calendar, agendas and locations, visit the Live Events/Conferences section on europeangaming.eu