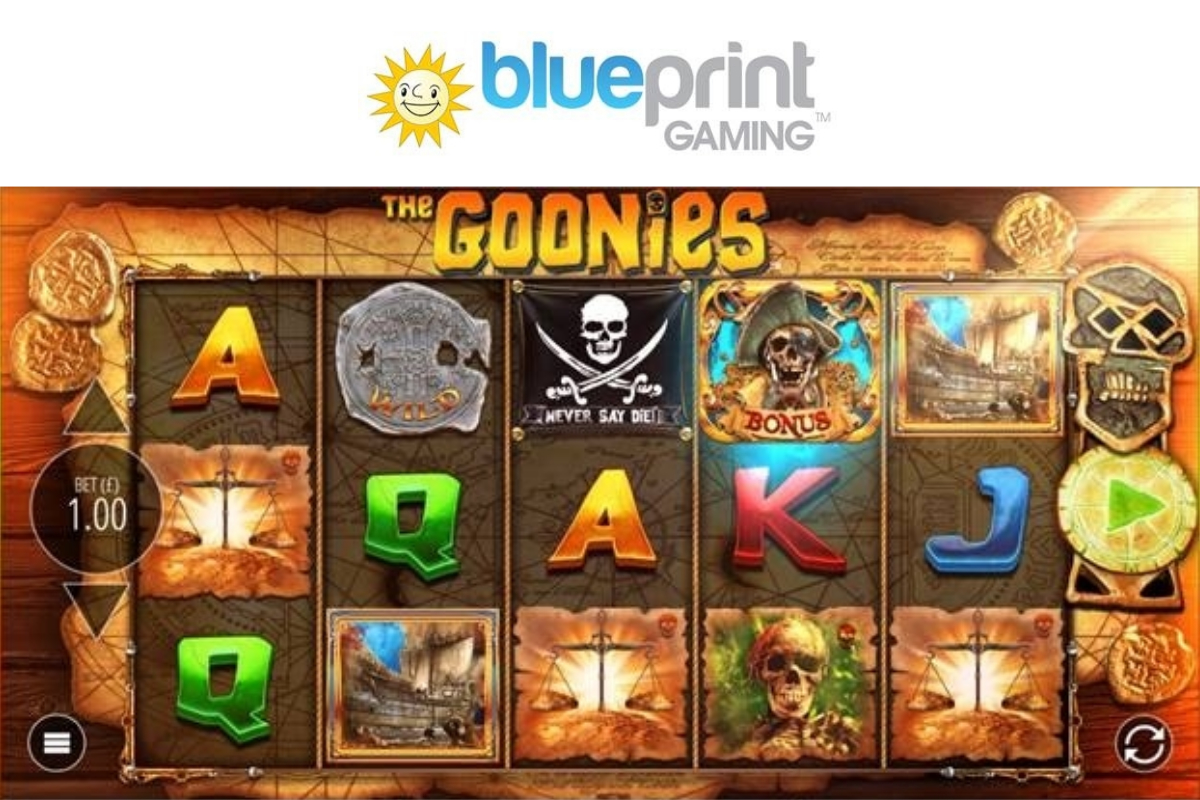 Leading UK-based game studio Blueprint Gaming, in partnership with Warner Bros. Consumer Products, has unveiled the latest addition to its portfolio of licensed slots with the release of The Goonies, inspired by the popular 1980’s pop-cult favourite film.

Blueprint’s newest slot game is set in the ‘Goon Docks’ and sees the iconic gang reunited as they follow an old Spanish map to unearth the long-lost fortune of One-Eyed Willy, a legendary 17th Century pirate.

As the journey unfolds and the search for the treasure intensifies, there are several chances to win through the glowing skeleton key, which awards players with a plethora of film-related features and modifiers such as Chunk’s Truffle Shuffle, Mikey’s Hidden Treasure and Super Sloth’s Free Spins.

One-Eyed Willy’s Treasure bonus is the first Blueprint big money feature which can be accessed via any modifier or feature, but only for those who beat the Fratellis to reach the riches.

The game is released with a 10p stake option, providing operators with a unique marketing opportunity through free spins promotions and campaigns.

The Goonies joins Blueprint Gaming’s strong portfolio of licensed games, which includes Top Cat, also developed in partnership with Warner Bros. Consumer Products, as well as This is Spinal Tap and TED.

Jo Purvis, Director of Marketing and Relationships at Blueprint Gaming, said: “Hey you guys! The Goonies is one of the most iconic films of the 1980’s and we’re sure that our latest licensed slot will take players on an incredible adventure as they join their favourite characters on the journey of a lifetime!

“It’s one of our most immersive licensed games yet, with the ability to enter the big money feature from any modifier or bonus game, designed to help players hunt for the illusive treasure of One-Eyed Willy.”

Blueprint Gaming is a leading UK based game studio and part of Germany’s Gauselmann Group. It creates exciting slot games for the global online and mobile markets and its games are also available to be played on over 100,000 land-based gaming terminals across the UK, Germany and Italy.

As well as its original content, which has become hugely popular, it has developed successful slots based on a broad range of third party brands, offering players familiarity and operators unique marketing opportunities.

The Blueprint Gaming design and development team strives to push creative boundaries in the creation of slots that are as successful for its operating partners as they are entertaining and engaging for its players.

Blueprint is licensed to develop and supply online games by the UK Gambling Commission and Alderney Gambling Control Commission.

Warner Bros. Consumer Products (WBCP), a Warner Bros. Entertainment Company, extends the Studio’s powerful portfolio of entertainment brands and franchises into the lives of fans around the world.  WBCP partners with best-in-class licensees globally on an award-winning range of toys, fashion, home décor, and publishing inspired by franchises and properties such as DC, the Wizarding World, Looney Tunes and Hanna-Barbera. The division’s successful global themed entertainment business includes groundbreaking experiences such as The Wizarding World of Harry Potter and Warner Bros. World Abu Dhabi. With innovative global licensing and merchandising programs, retail initiatives, promotional partnerships and themed experiences, WBCP is one of the leading licensing and retail merchandising organizations in the world.

THE GOONIES and all related characters and elements © & ™ Warner Bros. Entertainment Inc. (s18) 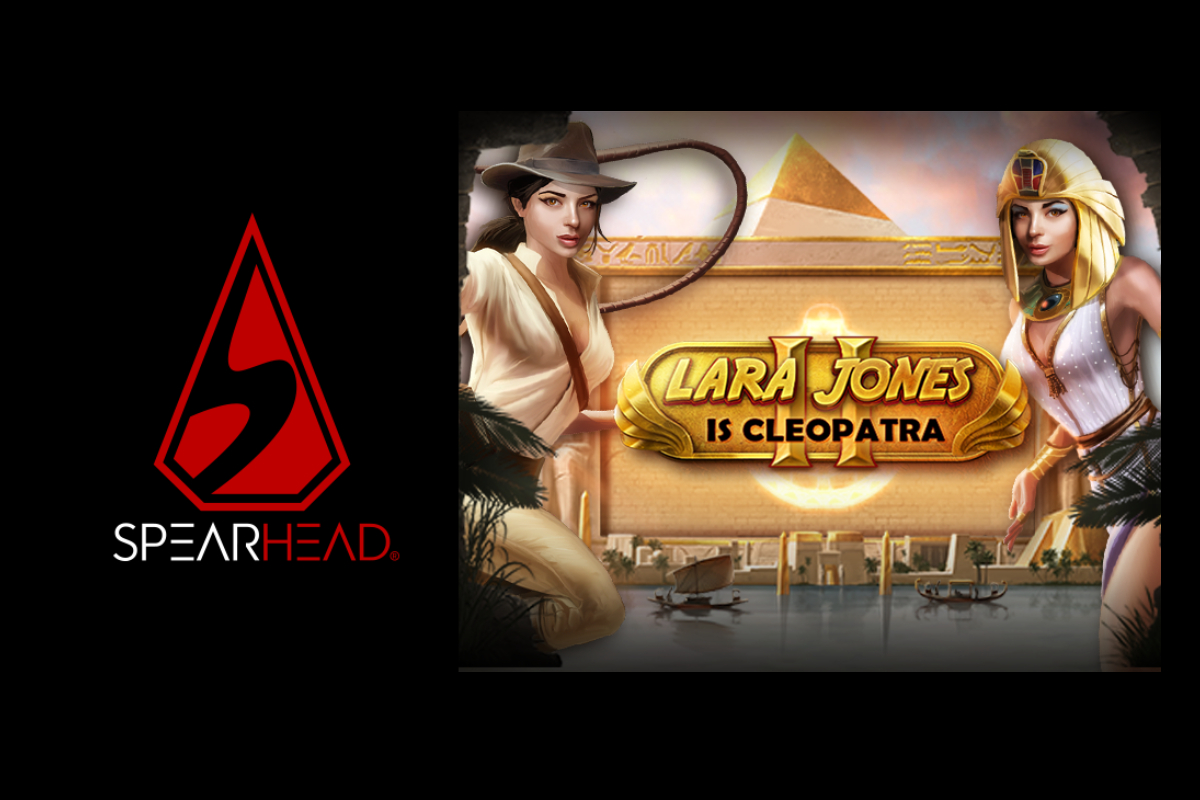 The much-awaited sequel of the blockbuster Lara Jones is Cleopatra has been made available by Spearhead Studios, gaming developer within EveryMatrix Group. The new high-volatility title can bring wins up to a massive 17,000x.

Lara Jones is Cleopatra II sets its action inside the tomb of the famous Egyptian Queen, Cleopatra. Fresh from her adventures in the highly successful prequel, Lara Jones is on her way to hunt the treasures buried within the Queen’s tomb.

Lara Jones is Cleopatra II is a high volatility, 5×3 video slot with ten pay lines and brings a Return to Player (RTP) of 96.10%. The base game offers Cleopatra Cascade Spins where all winning symbols stick, and re-spins keep occurring until the wins can no longer be improved. When reaching the free spins feature, where all wilds become sticky, players can choose between the standard or high volatility options.

Kevin Corti, Game Development Director at Spearhead, says: “I am, once again, extremely proud of what our team have achieved with this game. The math model is extremely engaging, the artwork is unquestionably stunning, and the audio captivates players’ attention. The Cleopatra Cascade base feature can be very rewarding for players, and the two volatility options provide them with the opportunity to seek out the bonus feature experience they most desire.”

The game, which was developed using Spearhead Studios’ proprietary game development technology and tools, is optimised for mobile gameplay and is highly responsive across devices. The UI responds fluidly to the device and orientation, and the file size is best-in-class for premium-quality games of this type. It is available in a wide range of currencies and languages and is certified for all major jurisdictions.

Earlier this month, Spearhead Studios announces its newly obtained certification for the Croatian market, bringing the total available markets to 12. Under the vision of creating Local Games for Local Markets, Spearhead Studios provides high-quality content in Malta, Spain, Romania, Sweden, Denmark, Latvia, Lithuania, Estonia, Colombia, Germany, Belarus, and Croatia, with US and other territories to follow. 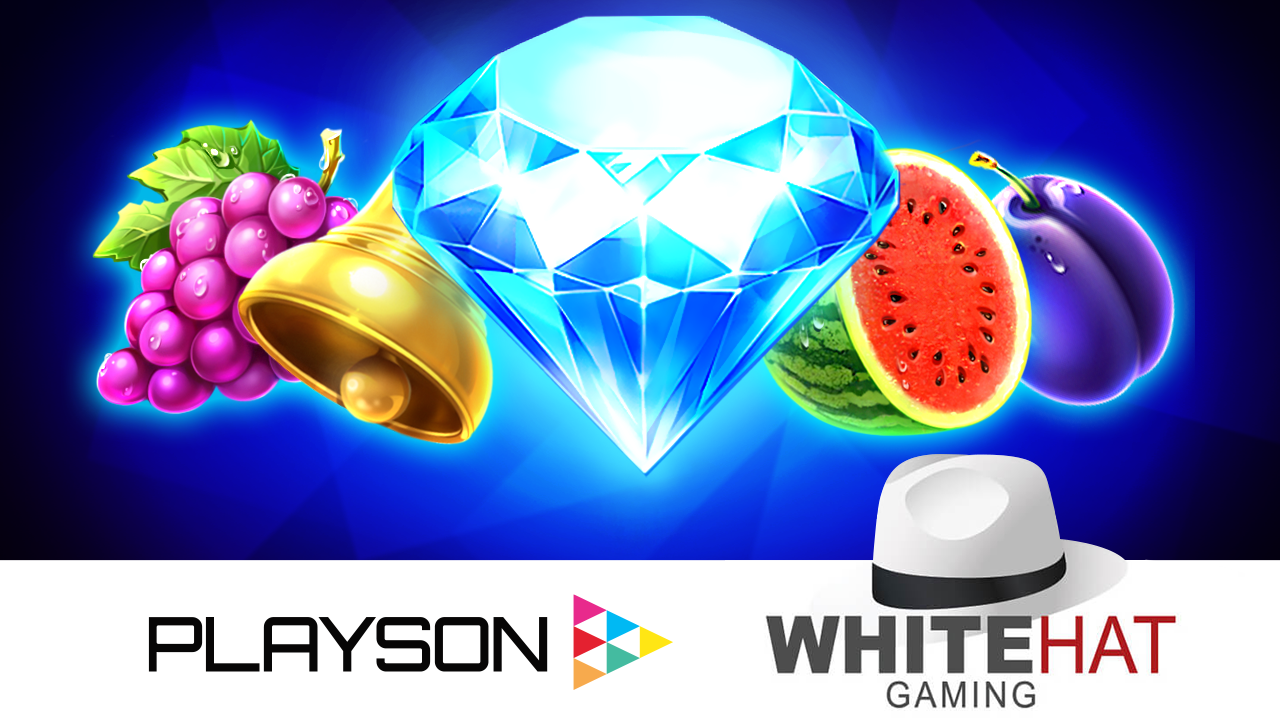 Casino software developer Playson has partnered with the full-service platform provider, White Hat Gaming, in a deal which will make the slot developer’s portfolio accessible to a wider audience.

Under the agreement, the company will deliver its engaging suite of Playson titles via 1X2Network’s 3PI platform, including fan favourites such as Solar King, Legend of Cleopatra MegawaysTM and the recent smash-hit, Divine Dragon: Hold and Win.

The deal sees Playson continue to enlarge its commercial presence in Europe, with the supplier’s immersive games collection now enjoyed by a growing number of players on the continent and beyond.

Blanka Homor, Sales Director at Playson, said: “Partnering with state-of-the-art platform providers, such as White Hat Gaming, strengthens our credentials as a producer of world class content, so we welcome this agreement.

Andy Whitworth, CCO at White Hat Gaming, said: “Adding content across multiple brands allows us to effortlessly increase our reach. We look forward to offering Playson games on our platform and we have been impressed with Playson’s desire to work with us as we implement our strategic growth plans.” 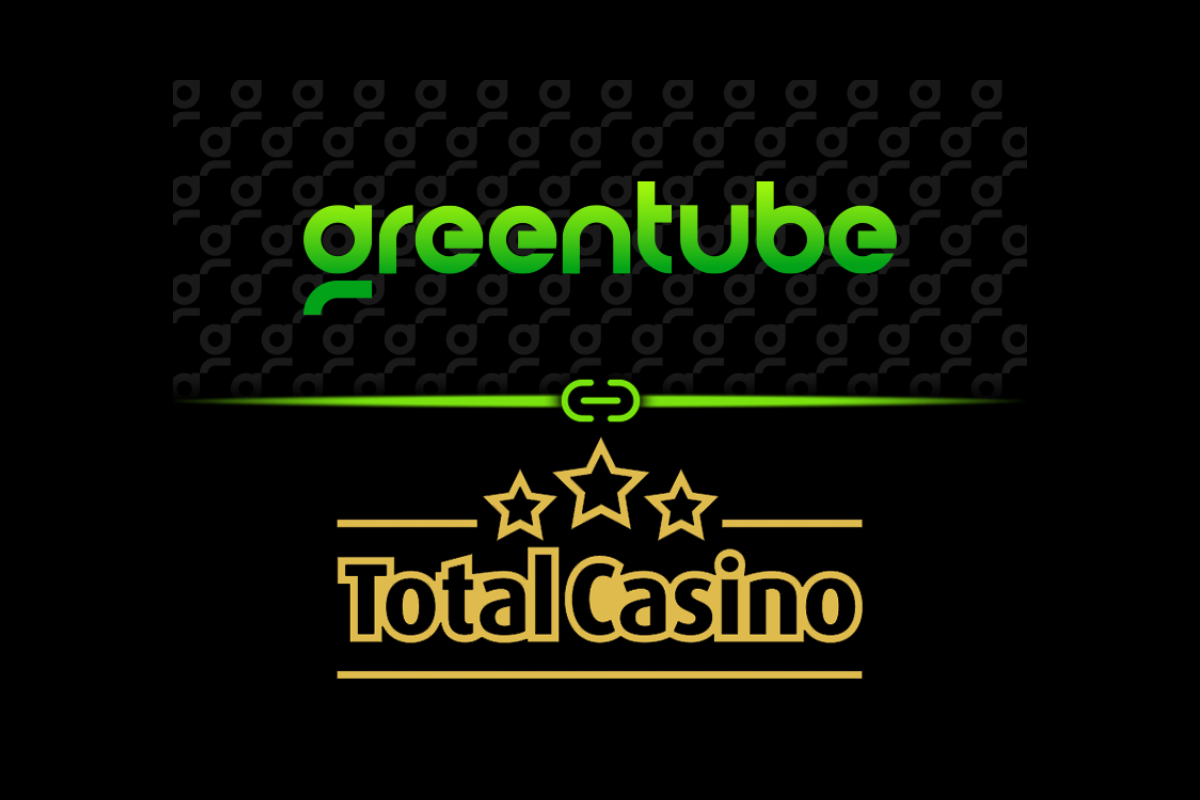 Greentube, the NOVOMATIC Interactive division, has made its market entry into Poland after taking its content live with Totalizator Sportowy’s brand Total Casino.

The deal means the supplier’s online and mobile versions of iconic titles such as Sizzling Hot™, Book of Ra and Lucky Lady’s Charm™ are now available for the first time to Polish online players through the monopoly casino operator’s Total Casino site. Also set to be integrated with Total Casino are top-performing titles from Greentube Collections, an exclusive portfolio encompassing all the supplier’s most popular games series. This new digital distribution channel perfectly complements NOVOMATIC´s omni-channel strategy with the rollout of its top performing VLTs with Totalizator Sportowy’s retail network. Players will now be able to play their favourite NOVOMATIC titles in retail outlets as well as online.

State-owned Totalizator Sportowy is the only operator legally entitled to offer online casino games in Poland and the Total Casino brand has experienced impressive growth since it launched in 2018.

The entrance into the online market in Poland represents the latest step for Greentube. It follows on from new entries into Denmark and Mexico last year and the supplier’s continued expansion in Europe and Latin America, with Germany and the Netherlands on the horizon in addition to the launch of its new RGS platform later this year.

Michael Bauer, CFO/CGO at Greentube, said: “Totalizator Sportowy’s casino brand is very well-respected by players in Poland, and to be selected as an online partner is further evidence that we are a market-leading force when it comes to iGaming content across a wide range of regulated markets. Greentube has already enjoyed a fruitful start to 2021 and this new market entry and partnership shows our commitment to expanding our reach.”

Maciej Kasprzak, Online Gaming Director at Totalizator Sportowy, added: “We are constantly developing our offer and we want our clients to experience the best entertainment from the best developers. The arrival of Greentube’s content has been greeted by the players with much excitement. We look forward to continuing a successful partnership.”

Bwin Ends its Operations in Russia