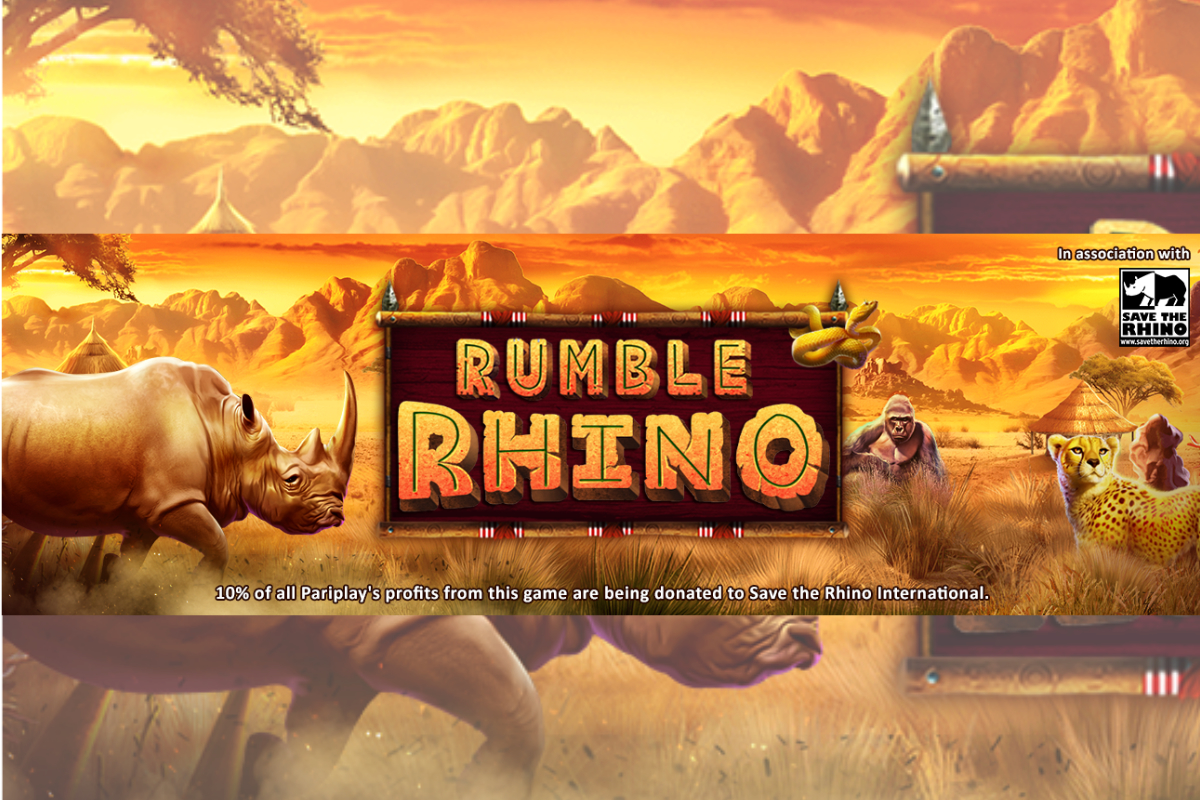 Pariplay Ltd., a gaming technology company serving iGaming operators, land-based casinos and lotteries, has launched Rumble Rhino, a new online video slot designed to take players on a journey through the raw beauty of the African landscape. More than just a great gaming experience, 10% of all Pariplay’s profits from the Rumble Rhino game will be donated to Save the Rhino International (SRI), a UK-registered charity with a mission of protecting endangered rhino species.

Pariplay’s Rumble Rhino offers players 100 paylines, along with the exciting “Mystery Mask” feature, which provides the potential for massive winning combinations, wilds, scatters, a 4×4 symbol, a bonus game and free spins. Players can expect to find the game as captivating as the incredible scenery and the animals inhabiting it, such as ambling zebras, towering giraffes and, of course, the endangered Rhino itself.

Rumble Rhino offers a lucrative 95.52% return-to-player (RTP) rate and is designed for a global audience with over 20 different languages available. To further optimise player enjoyment, the game was developed in HTML5, allowing for gameplay on both mobile phones and desktops. The game’s mobile portrait mode also allows players to easily switch to one-handed gameplay.

Certified by gambling regulators in the UK, Isle of Man and Malta, the slot is the latest addition to Pariplay’s growing portfolio of over 100 online casino games. Alongside its original and branded slot titles, the company also provides a selection of online scratch cards, bingo games and instant win titles.

Rumble Rhino players will be greeted by a scenic introductory video that further expands on the collaboration with SRI. This is followed by a prompt informing them that 10% of all Pariplay’s profits from the Rumble Rhino game will be donated to Save the Rhino International – UK Registered Charity No. 1035072, with a guaranteed minimum of €10,000.

Richard Mintz, Commercial and Marketing Director at Pariplay, said: “We’re excited to partner with SRI for the release of Rumble Rhino, which gives players a rewarding gameplay experience with the added benefit of contributing to a thoroughly deserving charity and an admirable vision. We’re always looking for ways to innovate and makes our games stand out – Rumble Rhino is a prime example of that effort.

About Save the Rhino International (UK registered charity: 1035072)

Save the Rhino International’s mission is to collaborate with partners to support endangered rhinos in Africa and Asia. Save the Rhino does this by the following strategies:

About Pariplay Ltd.
Pariplay Limited is a leading provider of Internet Gaming Systems, offering state-of-the-art, in-house developed gaming platforms and Internet games as well as integrated third-party games from leading industry companies. Founded in 2010, our team has over 70 gaming experts with offices in Tel Aviv, Israel, Sofia, Bulgaria, Gibraltar, Isle of Man and India, built to support our customers’ requirements in a dynamic and competitive environment.

As a business-to-business provider of games of skill and chance, Pariplay fully understands the importance of responsible gaming and has implemented policies and tools within its systems and games to provide industry-leading entertainment in a socially responsible fashion. The system combines identity verification with age verification and geo-Location services to determine whether an individual meets the minimum age requirement and is playing within a specific territory. Pariplay has implemented multiple responsible gaming tools to meet different regulatory standards and have provided players with a sophisticated self-exclusion tool that offers them an easy way to manage their gaming habits.

Find Your Pot Of Gold At Barona Resort & Casino On St. Patrick’s Day 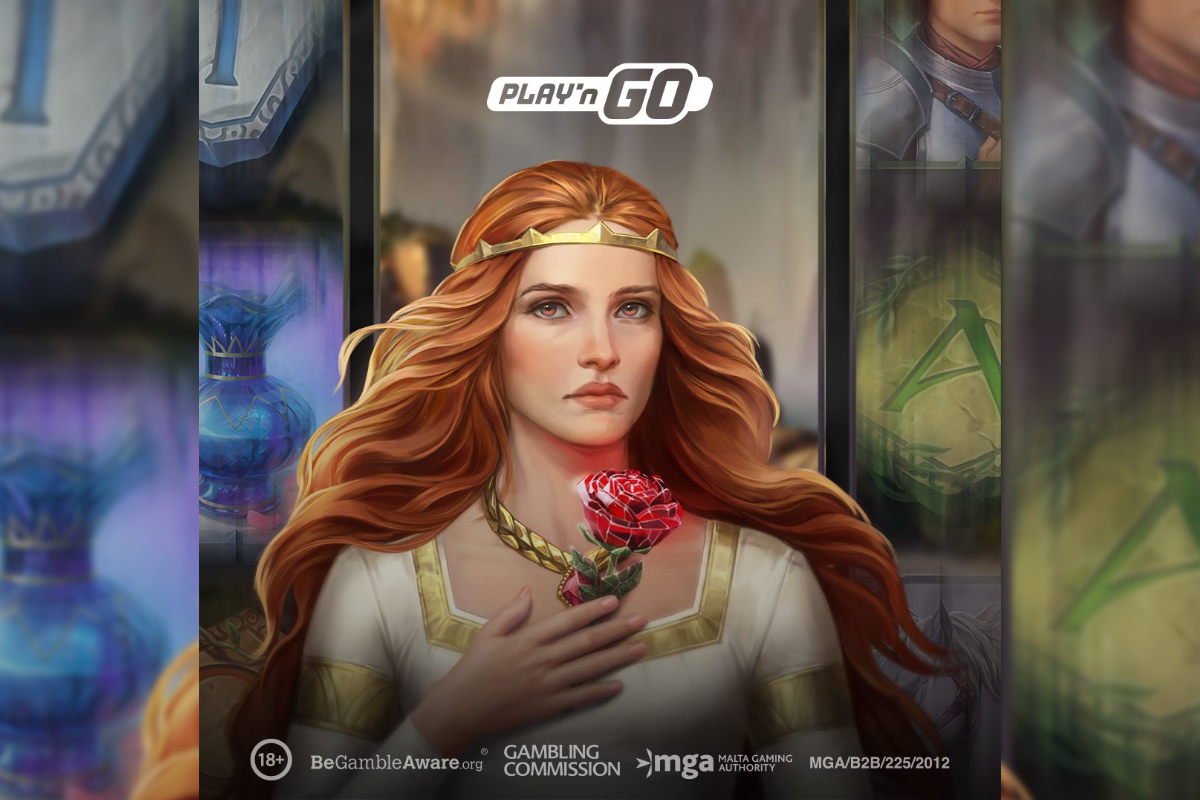 Play’n GO add a little romance to their Arthurian Legend series with the 15 Crystal Rose: A Tale of Love.

This is a legendary tale of love of the greatest kind, the tale of the 15 Crystal Roses. Sir Lancelot has declared his love for Princess Elaine. As a symbol of true devotion, he must seek out the 15 Crystal Roses, buried deep in the enchanted woods.

As the fourth game in Play’n GO’s popular Arthurian Legend series, 15 Crystal Roses: A Tale of Love is already on the path to success. The game opens with a narrator telling us the story of the 15 Crystal Roses and continues throughout the game.

When it comes to features, we’re particularly interested in the Legendary Free Spins, which see random spins land the Crystal Rose Scatter symbols that can also be stacked. But the key is that players’ chances to trigger Free Spins are heightened as they only need one reel full of Scatters to unlock this feature.

Amongst the many features of this game, there is one that isn’t so common in the industry (so far). Players have the ability to keep track of their progress. How? The Quest Map.

The Quest Map not only shows the location of the 15 Crystal Roses, but it will also open at the beginning and the end of Free Spin sessions to show how many crystals the player has collected. Driving narrative, player engagement and immersion into the world of this epic tale.

“Every time we develop an Arthurian Legend game, we get to push narratives further and further.

“We’ve seen the likes of King Arthur, Merlin and Queen Guinivere, but now we’re getting to delve into the lives and adventures of secondary characters who may play a role in the adventures of the main protagonists – but they also have their own story to tell.” 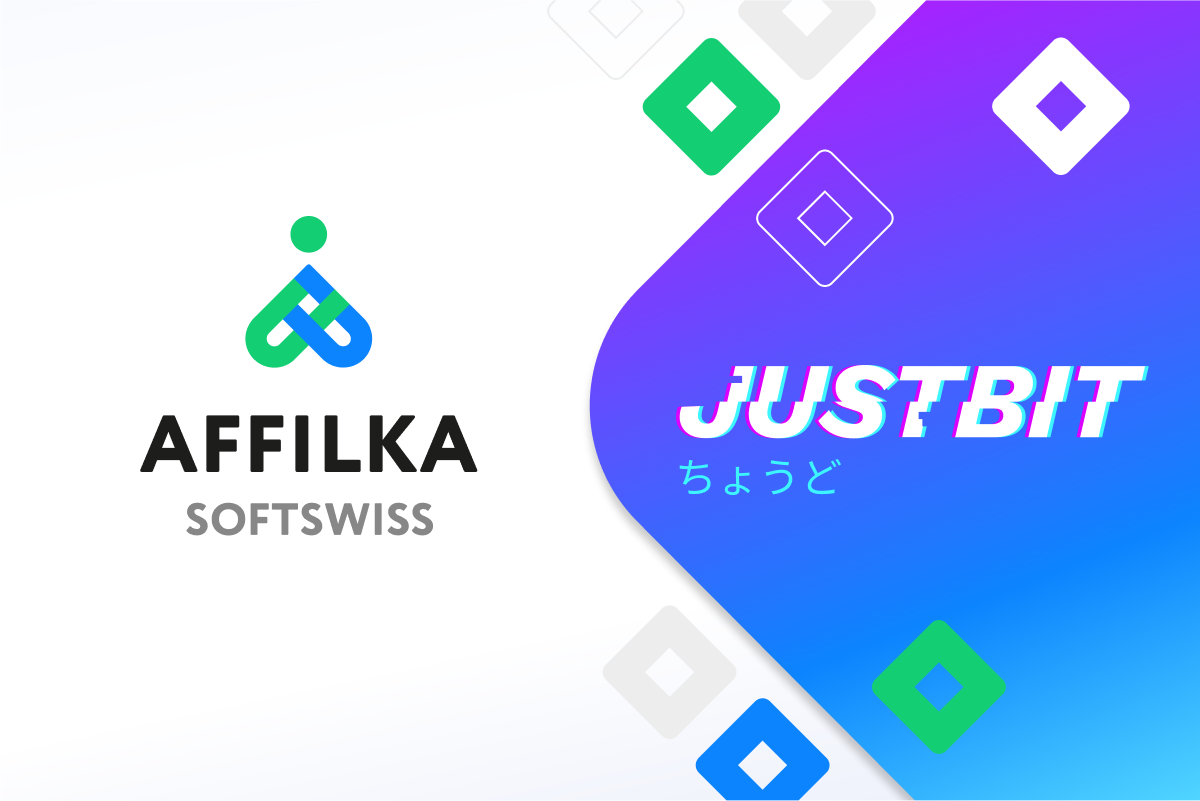 Affilka by SOFTSWISS is pleased to announce a new partnership with JustBit.io, an online casino operating under a Curacao licence. The new affiliate programme is called JustAffiliates. Justbit.io’s partnership with the affiliate marketing platform Affilka will enable the company to build strong and mutually beneficial relationships with affiliates, as well as attract quality traffic to their casino.

JustBit.io is a young and ambitious crypto-brand specialising in slots and live tables. Among the key reasons for choosing Affilka as the main partner for launching an affiliate program, Justbit.io mentioned its user-friendly payment module and commission constructor, allowing the company to customise a partner to the smallest detail. Multiple filtering options in statistics reports also help the brand do affiliate analysis faster.

The affiliate tracking software Affilka, created in 2018, is a cross functional solution for easy and fast iGaming brand promotion. Affilka is currently one of the most effective tools for affiliate marketing. Its advantages include:

“I am pleased to announce JustAffiliates – the first affiliate program, launched in the new year by Affilka, in partnership with JustBit.io! The gambling industry is an extremely competitive field. Therefore, in order to be successful, you need to choose the most reliable and reputable partners. Affilka fits the bill perfectly, since its reputation and more than a hundred satisfied clients speak for themselves,” said Anastasia Borovaya, Product Owner of Affilka by SOFTSWISS.

“I would like to thank the Affilka team for the professionalism and focus on the  customer service they demonstrated during the JustAffiliates affiliate program launch. We have already experienced the benefits of working with Affilka, so I can confidently say that JustBit.io made the right choice. I expect our affiliate program to be a great place to work productively with affiliates, growing and evolving together with our casino!” commented the Head of Affiliates at JustAffiliates.

SOFTSWISS is a widely-acclaimed iGaming expert, supplying certified software solutions for managing online gambling operations. The company has an international team, which counts 1,000+ employees and has an official presence in Malta, Belarus, Poland and Georgia. SOFTSWISS holds a number of gaming licences, including Curacao, Malta, Estonia, Belarus, Belgium, Sweden, Nigeria, Ghana, Serbia and Greece. The company has a vast product portfolio, which includes an Online Casino Platform, Game Aggregator with thousands of casino games, the Affilka affiliate platform, Sportsbook Platform and the Jackpot Aggregator. In 2013 SOFTSWISS was the first in the world to introduce a bitcoin-optimised online casino solution.

About JustBit.ioThe casino primarily addresses customers who want to process their deposits and withdrawals in Bitcoin. JustBit is operated by Casbit Group N.V. The company is registered and licensed in Curacao. The approval of the Caribbean state ensures absolute security for the players. Although the casino was founded in 2021, it has reinvented itself and is fast growing as one of the most modern and extensive casinos to this day. There are huge live casino offers, attractive loyalty bonuses, website in English and Japanese and more. JustBit.io – Easy way for crypto play. 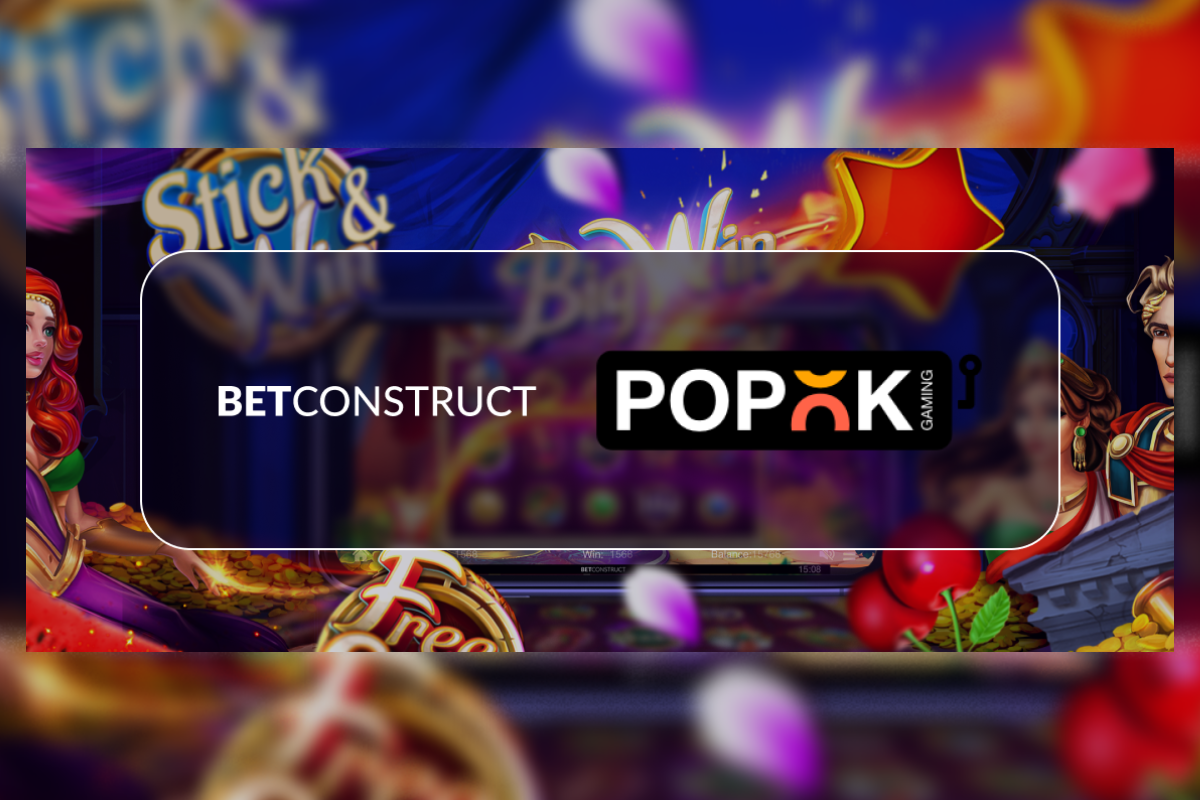 The visionary team of PopOK Gaming regularly comes up with innovative ideas that are easily brought to life. Thus, in a very short time their games have become a beloved online slot games developer among players and operators from all over the world.

The slot developer has swiftly made the grade by engaging multiple players around the globe. The eye-popping designs, vivid colours, smooth and dynamic animations, rich jackpots, low volatility and high RTPs are all up to par.

Seeing the success of PopOK Gaming, BetConstruct couldn’t withhold from adding the titles like Mega Joker, Los Apaches, Hot Bar, Frozen Fruits and many others to its ever-growing portfolio of slot games.

Having 8,000+ slot games, BetConstruct’s portfolio is proven to be perfectly adapted to the igaming world bringing the promise to boost both player engagement and operators’ revenue streams. Now the excellent outcome of the partnership with PopOk Gaming will be the maximum thrill, active involvement and positive feedback.

PRAGMATIC PLAY VENTURES BENEATH THE SURFACE IN WILD DEPTHS™