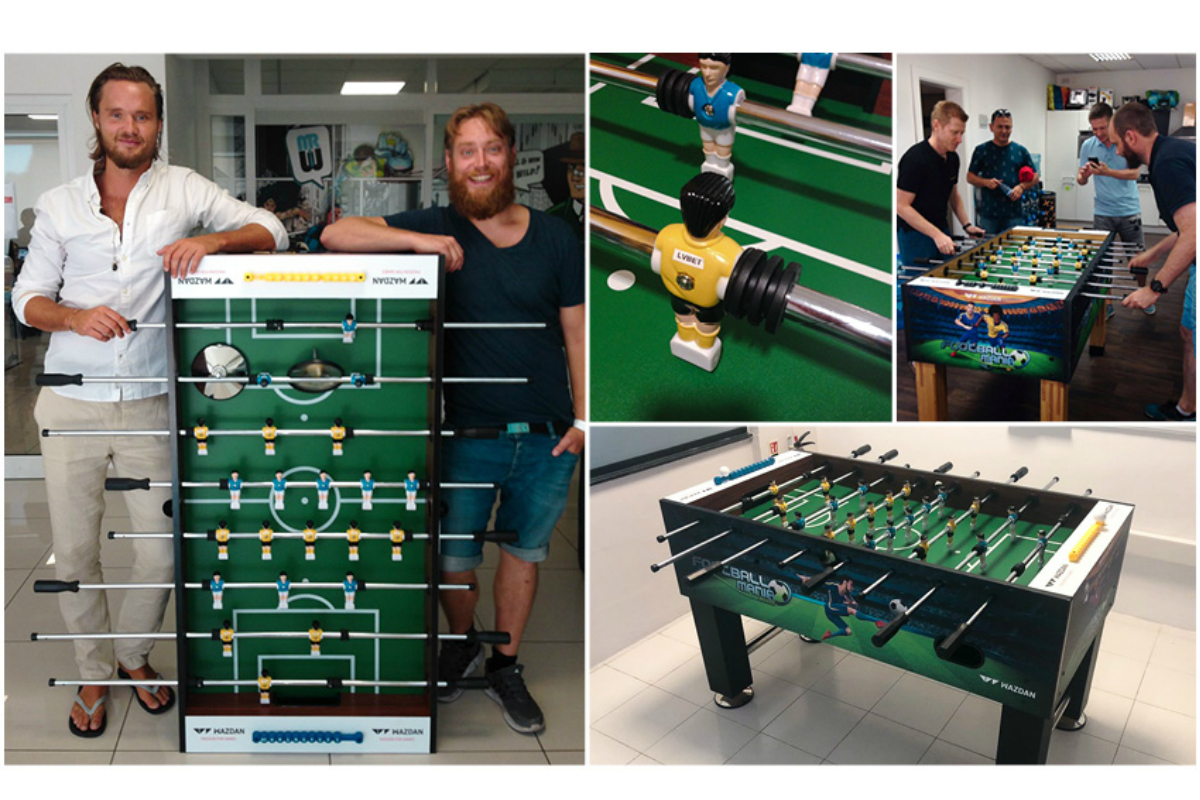 This high stakes game can be enjoyed for its superb graphics and animations, as well as an ambient sound atmosphere that brings the major stadium onto the screen and pulls players into the game to kick off the ball and run towards scoring the jackpot. Set in a major football stadium, the reels are set on the grass against a cheering crowd. To win, players initially find several identical symbols anywhere on the screen, while the game allows them to block any symbols and spin the reels again for a chance to score even bigger wins. Common elements of the paytable are the shoes, whistle, fan’s hat and referee. The goalkeeper and the bronze, silver and gold cups are rarer but also much more rewarding.

All of this is underpinned and driven by a team of more than 100 professionals, developers, graphic designers, animators, mathematicians, sound designers, game developers, administrators, marketing specialists, implementers and customer service specialists across 4 countries and coordinated from a new European headquarters in Malta that extends over 4 floors on the edge of the countries’ exclusive Central Business District.

Head of Sales at Wazdan Andrzej Hyla said: “This is a game for football fans and they’re people with a lot of passion. Ahead of a packed World Cup game calendar we’re delighted to be bringing a great new slot to the fans with so many special features to keep players coming back. Football Mania Deluxe is an engaging and fulfilling experience for anyone curious looking to try something really new.”

Releasing at least two new games per month over the last year, Wazdan’s HTML5 portfolio of award-winning games is now with a growing number of leading online casino brands, including EveryMatrix, Videoslots, Solid Gaming and iSoftBet amongst others. All Wazdan’s games contain the Unique Wazdan Features, that include the world’s first Volatility Levels™, Energy Saving Mode, Double Screen Mode and Unique Gamble Feature.

ABOUT WAZDAN:
Wazdan is a popular game producer, developing innovative casino games that deliver original, fun and truly omni-channel player experience. Offering an extensive game library of over 100 HTML5 slots, table games and video pokers, Wazdan is gaining popularity on the iGaming market thanks to the great quality of their games, interesting themes and engaging gameplay. Wazdan’s game portfolio consists of such popular titles as Great Book of Magic Deluxe, Magic Target Deluxe, Valhalla and Wild Guns and soon will extended with new amazing slot games, including Los MuertosTM, Mayan RitualTM and Captain FlyntTM, among others. Wazdan releases new, exciting titles on a regular basis and equips them with Unique Wazdan Features: innovative Volatility LevelTM, exciting Unique Gamble Feature and mobile-friendly Energy Saving and Double Screen Modes. Wazdan holds a number of  European trademarks including for their world’s-first Volatility Level TM. Their extensive portfolio of clients includes some of the top gaming operations in the industry. The company is headquartered in Malta and holds licenses issued by the UKGC, the MGA and complies with Curacao regulations. Furthermore, their games use the RNG certified by the NMi, which ensures reliable, fair and secure gameplay. Wazdan’s Sales Team is showcasing their products at iGB Live! in Amsterdam from July 17th to the 20th.

Bird & Bird Budapest moves to a new office, strengthening its presence in the Hungarian market