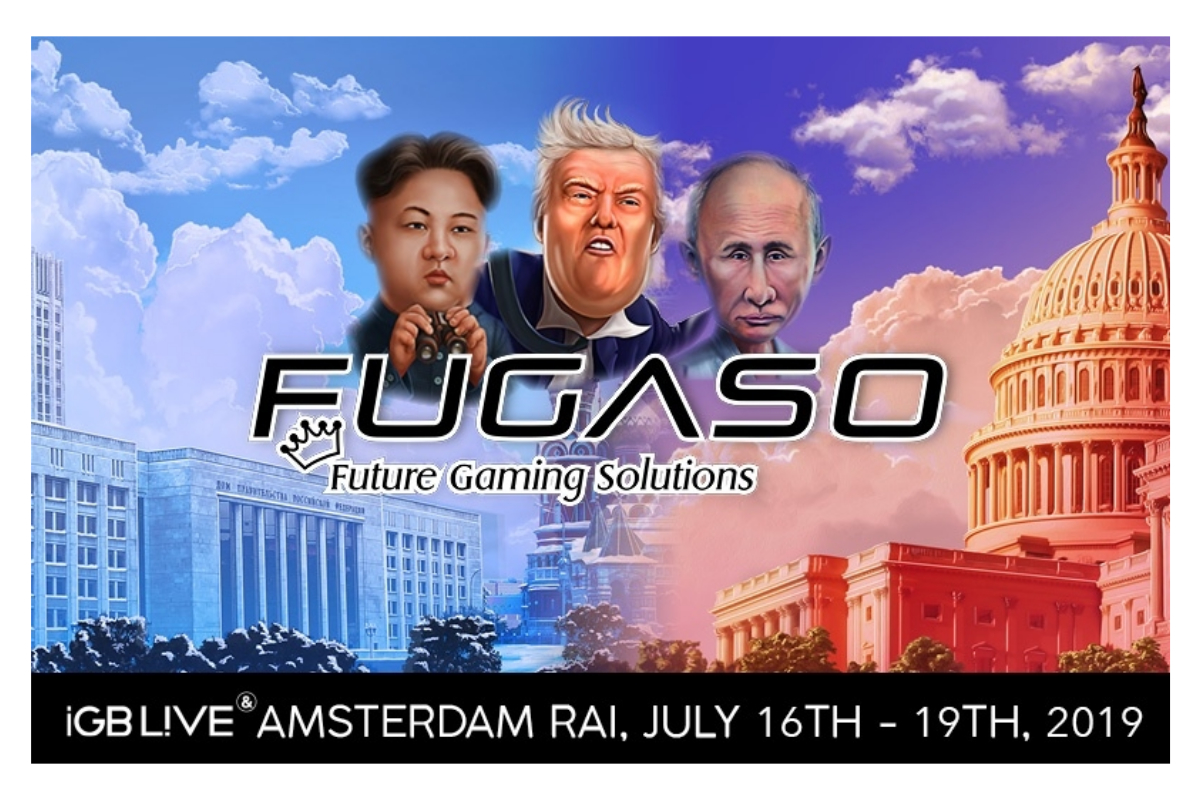 Amsterdam is home for the second consecutive year to iGB Live!, the largest igaming event in Continental Europe which sees a bump in both exhibitors and sponsors this year, more ambitious content and learning sessions, broader conference topics and networking galore across Amsterdam’s colourful venues and canals. Exploring a range of industry trends and needs, iGB Live! has rapidly established itself as the European reference point for decision-makers and senior igaming executives from around the world.
Fugaso is parading a money-spinning HTML5 games catalogue packed with over 60 popular hits full of innovative features as well as headlining the new games that are capturing operators and players hearts and minds, together with a spirited release schedule for the coming months that has partners and industry commentators waiting with bated breath. Characters on Trump It Deluxe, for example, are simply iconic and will make a great conversion game for any market around the world!

Fugaso, short for Future Gaming Solutions, is an independent slot studio brand with high-quality production of original and exciting gambling games that is making a name by becoming a partner of choice with a raft of top operators. The slamming slots portfolio is replete with fun and engaging features such as in Fugaso Airlines which has a stunning 3125 ways to win that makes the game challenging because the player needs to play until all the “blocks” are removed and then they get a much better chance of winning.

Upcoming releases include Book Of Tattoo II which will have a hallmark ‘Special Mystery Respins’ feature with an additional Book Of Tattoo Free Spins in an amazing 5-reels action-packed game that will keep players on the edge of their seats and glued to their screens. The fantastic Fugaso formula will also be applied to Clash of Gods, Don Slotione which includes some gangster characters to transport players a true blockbuster, and Magic Spinners Deluxe, which is one of the most hotly anticipated games of the year so far. Scroll Fugaso games and see the information tab to check out the features at https://fugaso.com/games

All Fugaso games are available in 120 currencies and 12 languages, but can be adapted for any language, and every game supports cryptocurrencies. One of the key technologies deployed in Fugaso games is the highly innovative ‘Rich Free Spins’ feature, which combines the benefits of multiple free spins into one super-valuable free spin that ramps up the excitement with the prospect of potentially highly generous payouts. No other games manufacturer is currently offering ‘Rich Free Spins’, a unique and proprietary differentiator in Fugaso’s technology vault.

Other slots from Fugaso, the primary engine powering countless casinos and gaming sites worldwide with sizzling and unique slots, includes the mighty 7-reels Imhotep Manuscript and capturing operator attention with revenue earners like Wild Rodeo, a slot adventure with the pioneers of old set in the Wild West. Players join the desperados and cowboys seeking out the American Dream by using Sticky Wilds, Free Spins and Re-Spins en route to a gold rush!

Robert Metzger, business development lead at Fugaso said: “We’re part of the global industry and we participate in all the most important shows across the year to consult with our partners and to introduce our powerful portfolio crammed with technology and features appealing to a wide range of industry stakeholders, including casinos, operators and aggregators, amongst others. iGB Live! was great last year and we’re looking forward to having many fruitful discussions across all four days of the show this year.”