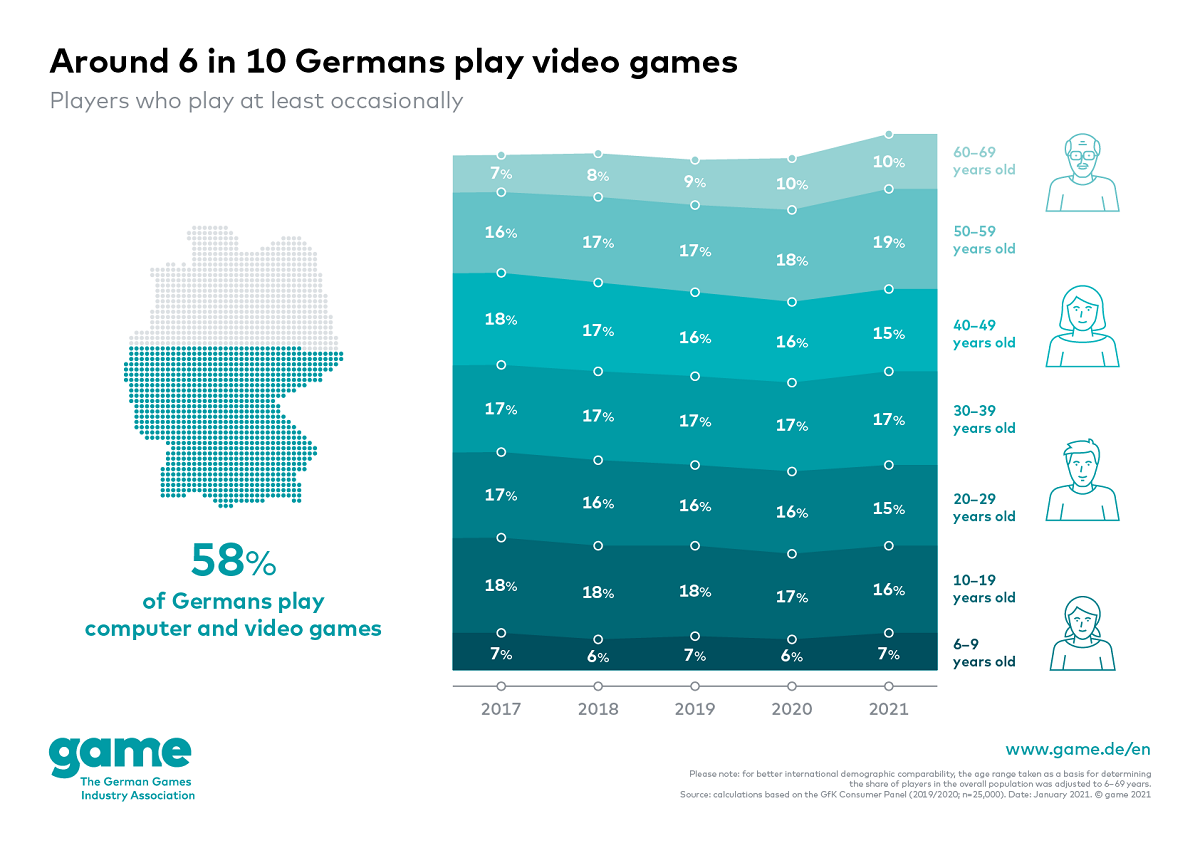 More than half of Germans play computer and video games. Overall, 58 per cent of the population between the ages of 6 and 69 reach for the console, PC or smartphone to plunge into digital worlds. In the Covid-19 year of 2020 alone, around 5 per cent more people in Germany took up playing computer and video games. These are the numbers released today by game – the German Games Industry Association, based on data collected by the market research company GfK. Participation is high across all age classes and genders. However, the 50- to 59-year-old segment is the largest group of players, in which about 1 in 5 currently plays computer and video games. This group and players in the 60–69 age class together make up one third of all German video game players. These ‘silver gamers’ are in part responsible for the continually rising average age of players in Germany – currently 37.4 – over the last several years.

‘The video game phenomenon has long been embraced by society as a whole,’ says Felix Falk, Managing Director of game. ‘But never before have so many Germans played as do today. In the last twelve months, the total number of video game players in Germany has grown by 5 per cent, a significant jump. During the shutdown phases in particular, games provided millions of people with great entertainment, a welcome diversion and also a way to stay in contact and have fun with family and friends. In this way, computer and video games made an important social contribution while also winning over millions of enthusiastic new players.’

About the market data
Please note: for purposes of better international demographic comparability, for the first time, only people between 6 and 69 years of age were taken into account in the analysis. This adjustment was made for data up to and including 2017.
The market data is based on statistics compiled by the GfK Consumer Panel. The methods used by GfK to collect data on Germany’s video games market are unique in terms of both their quality and their global use. They include an ongoing survey of 25,000 consumers who are representative of the German population as a whole regarding their video game purchasing and usage habits, as well as a retail panel. The data collection methods provide a unique insight into the German market for computer and video games. 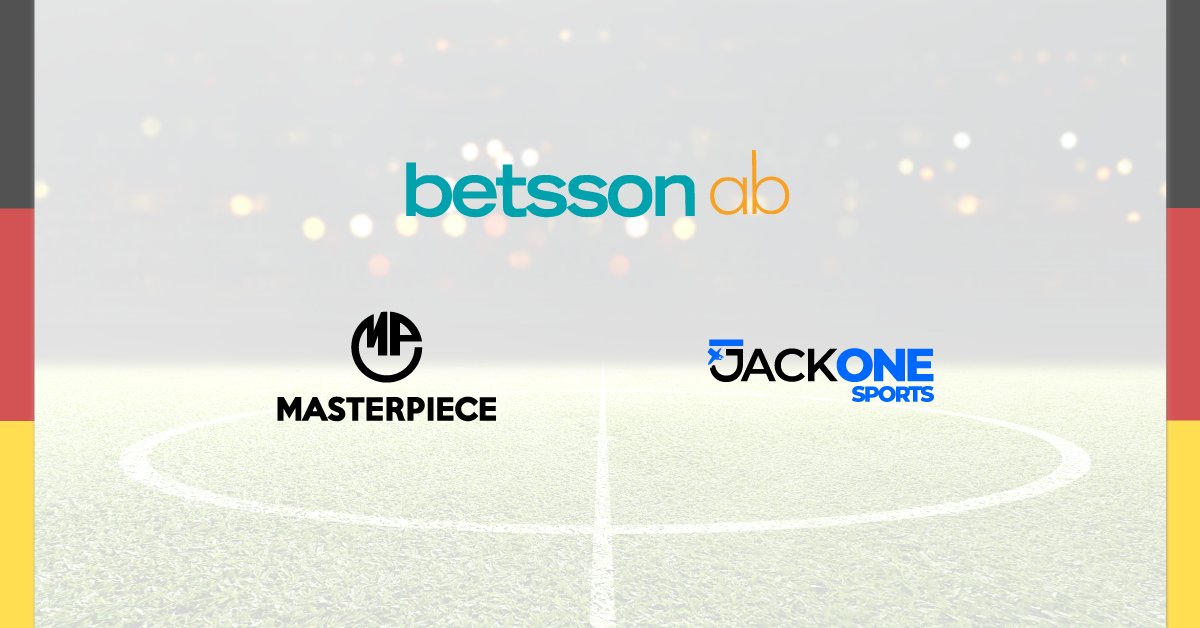 As per this multi-year agreement, Betsson will provide its in-house developed sportsbook and technology (Techsson) as well as customer support, odds, risk management and its Payment Platform (PAAS) to Masterpiece Gaming.

This agreement is in line with Betsson’s long-term growth strategy and confirms the company’s status as a global, in-demand supplier of B2B sportsbook and platform solutions.

“This deal proves that we have a competitive sportsbook product that is attractive and in demand by the market. Adding Masterpiece Gaming to our list of B2B sportsbook solution partners confirms our ambition to be a strong supplier on the B2B sportsbook market as part of our growth strategy. We are proud that Masterpiece Gaming has chosen us as a supplier,” Pontus Lindwall, CEO of Betsson AB, said.

The agreement is based on a performance based product fee and will run for two years, with an option of renewal. 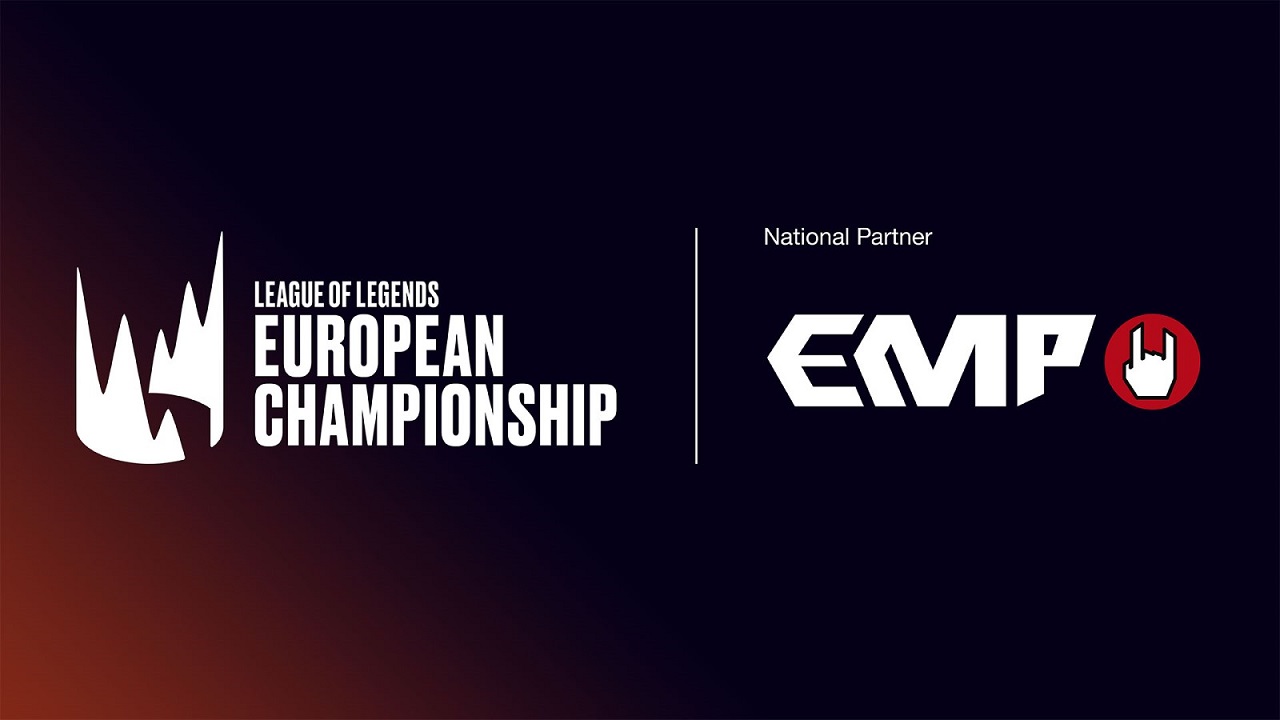 As we gear up for a hot 2021 Summer Season of action at the League of Legends European Championship (LEC), we’re delighted to announce that apparel brand EMP will be joining us as a National Partner of the German LEC broadcast!

EMP is an officially licensed seller of League of Legends merchandise, creating stylish designs based on some of the most iconic characters to hit the Rift. You’ll be seeing EMP appear throughout the German LEC broadcasts, highlighting some of their incredible LoL merch designed to show off your love of the game and the champions within. We’re extremely excited that they’ve chosen to take their partnership even further and work with us at the LEC.

“We’re looking forward to expanding our collaboration with Riot Games, also in the area of sponsorship and events,” says Head of Social & Brand Media at EMP, Philipp Bensmann. “We hope for a fair and exciting season with many unique interactions within the European League of Legends community.”

“Our company differentiates itself through our exclusive merchandise products, including licensed League of Legends merch, and our close relationship with fans,” adds EMP’s Chief Digital Officer, Sascha Müller. “That’s why collaboration with an exclusive, professional and community-adjacent league such as the LEC is an important further strategic step for our gaming engagement.”

EMP are joining us for what is set to be an incredibly exciting season of action. MAD Lions are returning from an impressive Mid-Season Invitational run to prove that they’re not just a one-time winning team. Fnatic are making huge roster changes in an effort to regain their place at the top of the leaderboards. No matter who you’re rooting for, it’s sure to be an incredible season.

The LEC returns today, with EMP as a National Partner for Germany. Make sure to catch all the action on lolesports.com. 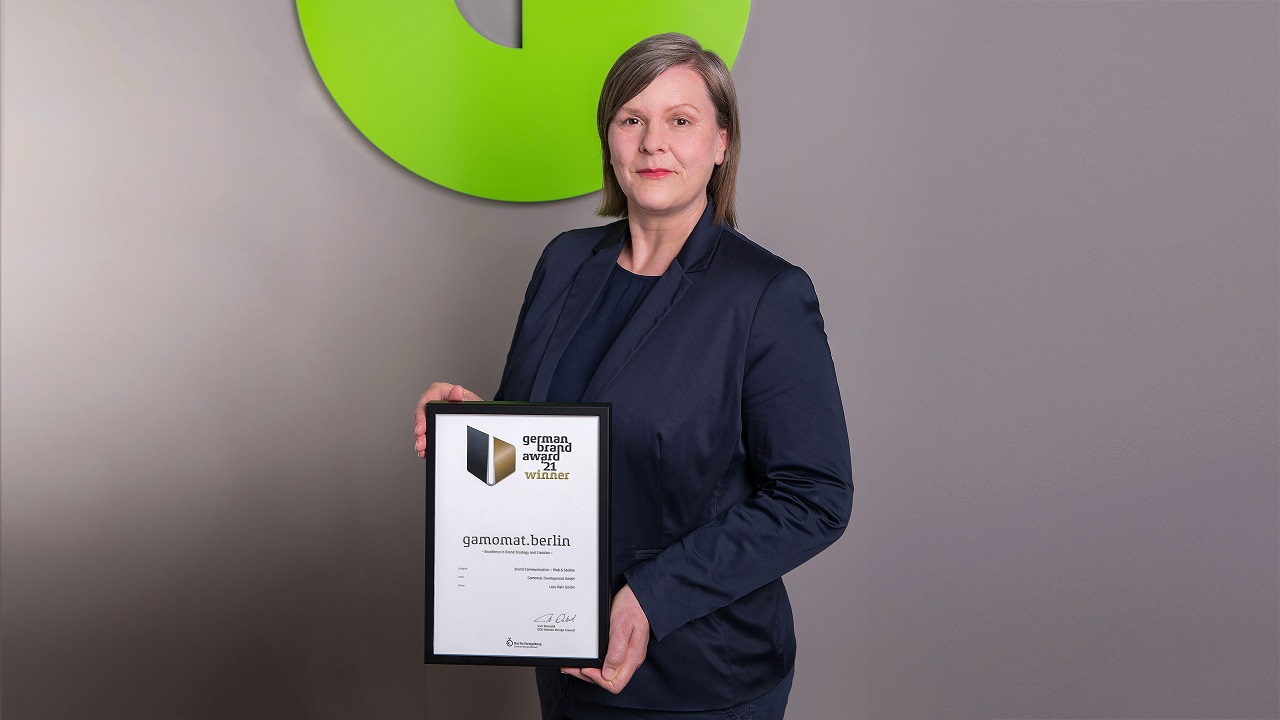 GAMOMAT, one of the leading German iGaming development studios, came out on top in two categories at last Friday’s prestigious German Brand Award ceremony in Berlin.

Berlin-based agency, Less Rain, developed the corporate design of the GAMOMAT brand and the relaunch of the award-winning website. The colourful, playful and clear brand design flows throughout every element of the website. At the heart of GAMOMAT’s brand identity is the lavishly produced personalised podcast series which shines a light on the shared values and vibrant corporate culture.

“The two awards are fantastic recognition of our work, as the German Brand Award is one of the
most important for successful brand management in Germany,” says Sabine Müller, Chief Design Officer of Berlin-based GAMOMAT Development GmbH. “Winning awards is not the driving force behind undertaking a corporate rebrand, but being honoured at the German Brand Awards will encourage us to steadfastly continue our consistent brand management and effective brand communication with agency Less Rain.”

Taking to the podium twice on Friday was a proud moment for the innovative Berlin game developer and recognition for an extremely successful team project.