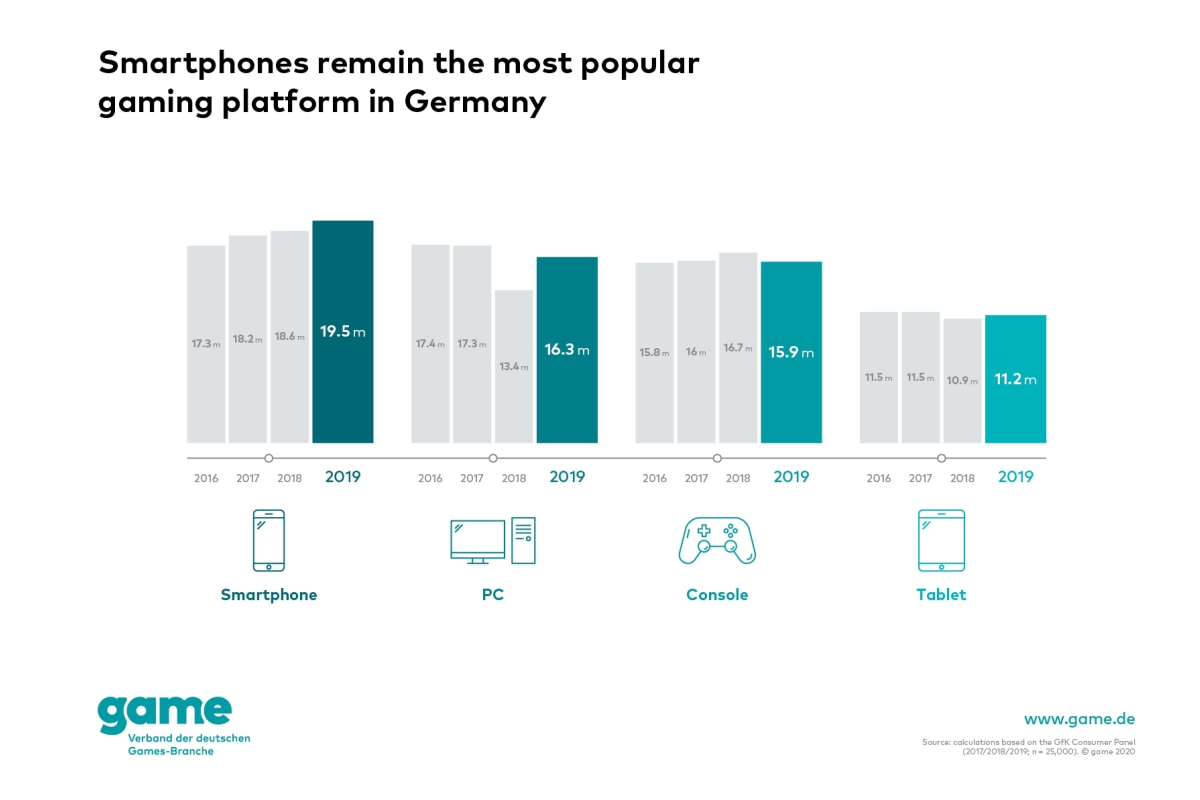 • PCs back in second place

Smartphones remain the most popular gaming platform among Germans. Puzzles, brain-teasers or building games: 19.5 million people in Germany use smartphones to play games. That’s 900,000 more gamers than in 2018. These are the figures released today by game – the German Games Industry Association, based on data collected by the market research company GfK. This means smartphones are now Germany’s most popular gaming platform by an even wider margin; they hit the top spot for the first time in 2018. The number of PC users increased as well: in 2019, around 16.3 million people played on computers, which is an increase of 2.9 million gamers compared to 2018. Reasons for this growth include the release of hotly anticipated games such as city-building strategy game ‘Anno 1800’ or the western epic ‘Red Dead Redemption 2’, as well as the launch of new subscription services such as the Xbox Game Pass for PC or Ubisoft’s Uplay+.

By contrast, fewer people used consoles such as the Nintendo Switch, the Sony PlayStation, or the Microsoft Xbox to dive into the digital world in 2019. Approximately 15.9 million people played console games in 2019 – around 800,000 fewer gamers than in the previous year. However, the planned launches of the follow-up consoles to Sony’s PlayStation 4 and Microsoft’s Xbox One at the end of the year are expected to breathe new life into the console sector. As game announced in March, one third of Germans are greatly looking forward to the release of the coming generation of consoles. Tablets, on the other hand, gained approximately 300,000 additional users in 2019, amounting to a total of 11.3 million gamers. Overall, more than 34 million Germans play computer and video games. The average age is 37.5 years.

Felix Falk, Managing Director of game, says: ‘At home or on the go, alone or with friends: Germans play games all the time and everywhere. At times like these, in particular, we can see why so many people in Germany love games: they’re fun, they bring people together, and they allow us to escape for a little while, even when we’re sitting at home.’

About the market data
The current data take into account further dedicated games hardware like gaming PCs and the corresponding accessories, resulting in a larger market size than previously reported. This is true also of the adjusted data for 2018, which accordingly differs from that reported last year.
The market data is based on statistics compiled by the GfK Consumer Panel and App Annie. The methods used by GfK to collect data on Germany’s digital games market are unique in terms of both their quality and their global use. They include an ongoing survey of 25,000 consumers who are representative of the German population as a whole regarding their digital game purchasing and usage habits, as well as a retail panel. The data collection methods provide a unique insight into the German market for computer and video games.

game – the German Games Industry Association:
We are the association of the German games industry. Our members include developers, publishers and many other games industry actors such as esports event organisers, educational establishments and service providers. As a joint organiser of gamescom, we are responsible for the world’s biggest event for computer and video games. We are an expert partner for media and for political and social institutions, and answer questions relating to market development, games culture and media literacy. Our mission is to make Germany the best games location. 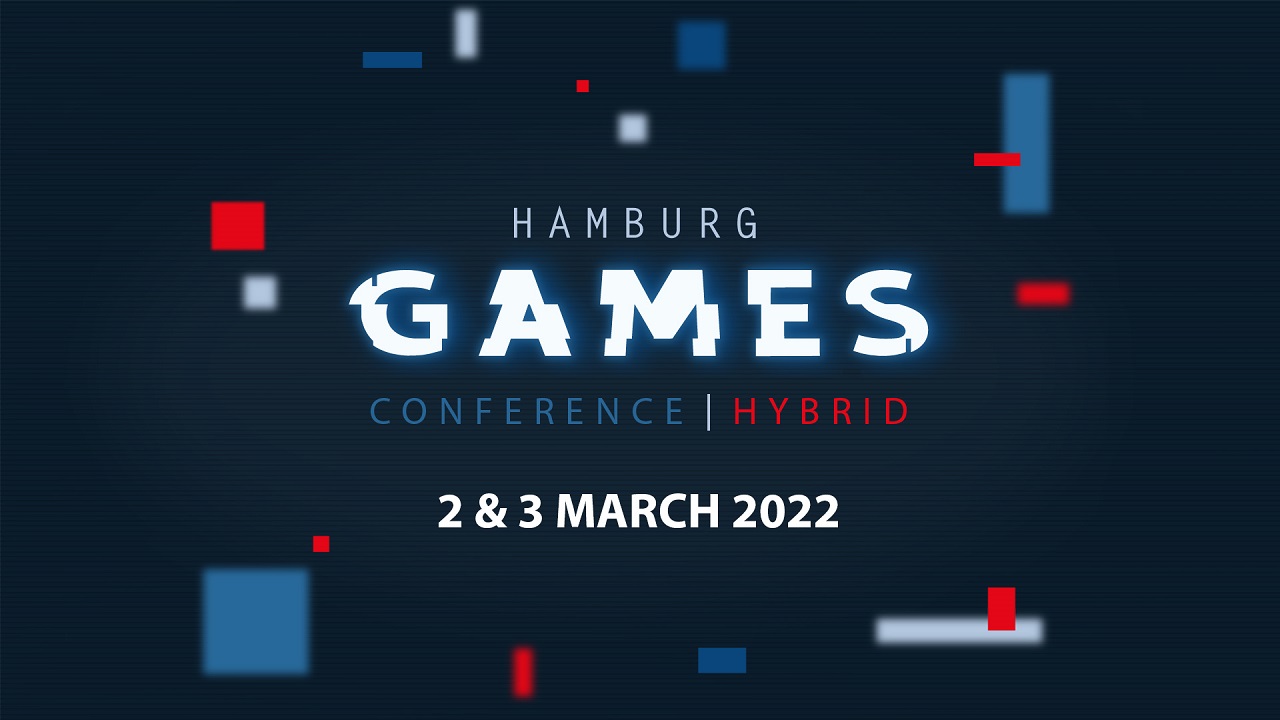 The 13th Hamburg Games Conference on March 2nd and 3rd, 2022, invites international speakers, games industry experts, thought leaders, and trade visitors to exchange ideas at the hybrid event. Under the conference theme “Moving Markets” it will present keynotes and discussions on the constantly changing markets and business models in the games industry. For the first time, the Hamburg Games Conference is calling for topic proposals in a Call for Speakers. In addition, visitors can expect networking events, an expo area, and matchmaking both online and on-site. For the first time, the Hamburg Games Conference 2022 will pursue a hybrid event concept, where visitors can interact both in Hamburg’s Zeise Cinemas and digitally on a custom developed, playable conference platform. Tickets are available now.

Constant renewal, innovation, and change continue to be the key pillars of the games industry. New sales channels and target groups are opening up, and innovative business models are emerging. So, what will the games industry of tomorrow look like? And how do companies act with foresight and flexibility in the highly competitive games market to play a leading role in the future?

“Growth and change in the games industry received a boost amidst the global pandemic, which continues to shape its face today. We are looking forward to discussing current developments and open perspectives of the future of the industry together at the Hamburg Games Conference” says Dr. Ralph Graef from co-organizer GRAEF Rechtsanwälte.

The second conference track “Games Funding” will focus on news and best practices concerning games funding in Germany from the federal government, and regional funding offers from the federal states, such as the Games Lift Incubator and Prototype Funding in Hamburg.

This year, the Hamburg Games Conference will bring its international audience together at two locations for the first time: The first day is digital for all participants. On a browser-playable, interactive virtual cruise ship, conference visitors will meet for matchmaking and spontaneous video networking and discover new games projects and services in the online expo. The platform was developed specifically for the conference in 2021 and will be further expanded with new content and functions. For the second day of the conference, the Zeise Cinemas in Hamburg will open their doors with talks, discussion rounds, and networking events. The talks and panel discussions of the main track will also be broadcast live via the online platform.

“Drawing from the experience of the Hamburg Games Conference Online in 2021, we are once again offering international participants who cannot make the trip to Hamburg the event-feeling at home. Through the online platform, we connect participants in Hamburg with industry contacts around the world. Those who grace the ‘Gamecity Hamburg’ with a visit to the conference will also be offered the complete program on-site on March 3, including our Gamecity Treff in the evening,” says Dennis Schoubye, project lead at Gamecity Hamburg. 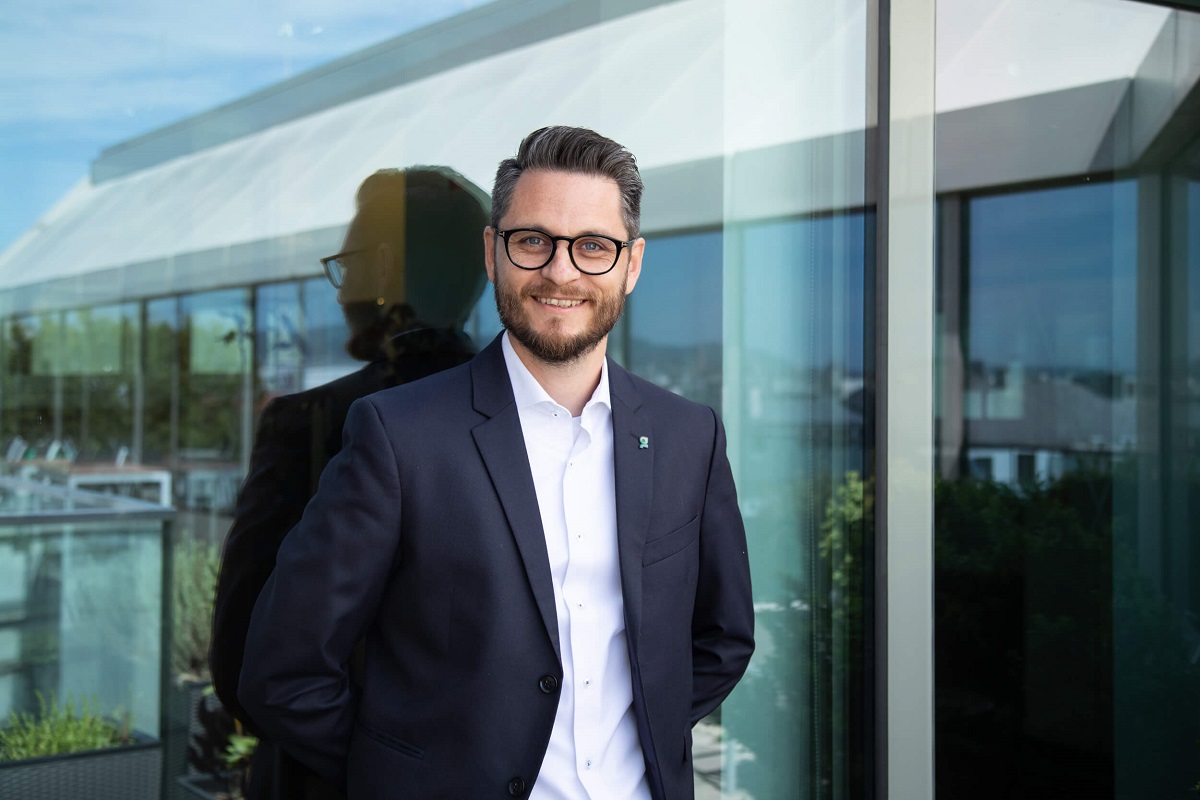 Greentube, the NOVOMATIC Interactive division, has boosted its presence in the German market after taking its content live with local operator NOVOLINE, the online brand of LÖWEN ENTERTAINMENT which is part of the NOVOMATIC Group.

The operator is Greentube’s first German B2B partner to take NOVOMATIC’s blue-chip titles live in the country and the portfolio includes an impressive 165+ games, with many of the top-performers currently only available in the country on a select few websites.

The partnership is the latest in a string of deals that have seen Greentube introduce its content to licensed operators in Germany since new legislation came into force on 1st July, permitting nationwide online gaming.

NOVOLINE is the online brand of LÖWEN ENTERTAINMENT, one of the leading manufacturers of gaming machines and operator of more than 520 arcades in Germany. Its customers are familiar with NOVOMATIC’s content which it can now offer online for the first time. Players can register for the online offer directly via novoline.de or in one of currently already more than 1,500 partner gaming arcades situated all over Germany.

Michael Bauer, CFO/CGO at Greentube said: “Germany is a key market for us going forward and with our content already popular among local brick-and-mortar players we are excited to expand our presence online through this deal with NOVOLINE. As the first Greentube partner to offer NOVOMATIC’s blue-chip titles in Germany, apart from our own brand StarGames, this partnership is an important step for us as we gain a foothold in this newly-regulated and exciting market.”

Oliver Bagus, Director of LÖWEN ENTERTAINMENT, said: “In 2006, we revolutionised the arcade market with new multi-gamers and NOVOMATIC’s games content. We now want to repeat this technological revolution online. We are thrilled to be one of the first operators to offer players classic titles such as Book of Ra and Sizzling Hot, as well as having the biggest selection of Greentube games on the market with more than 165 titles available.” 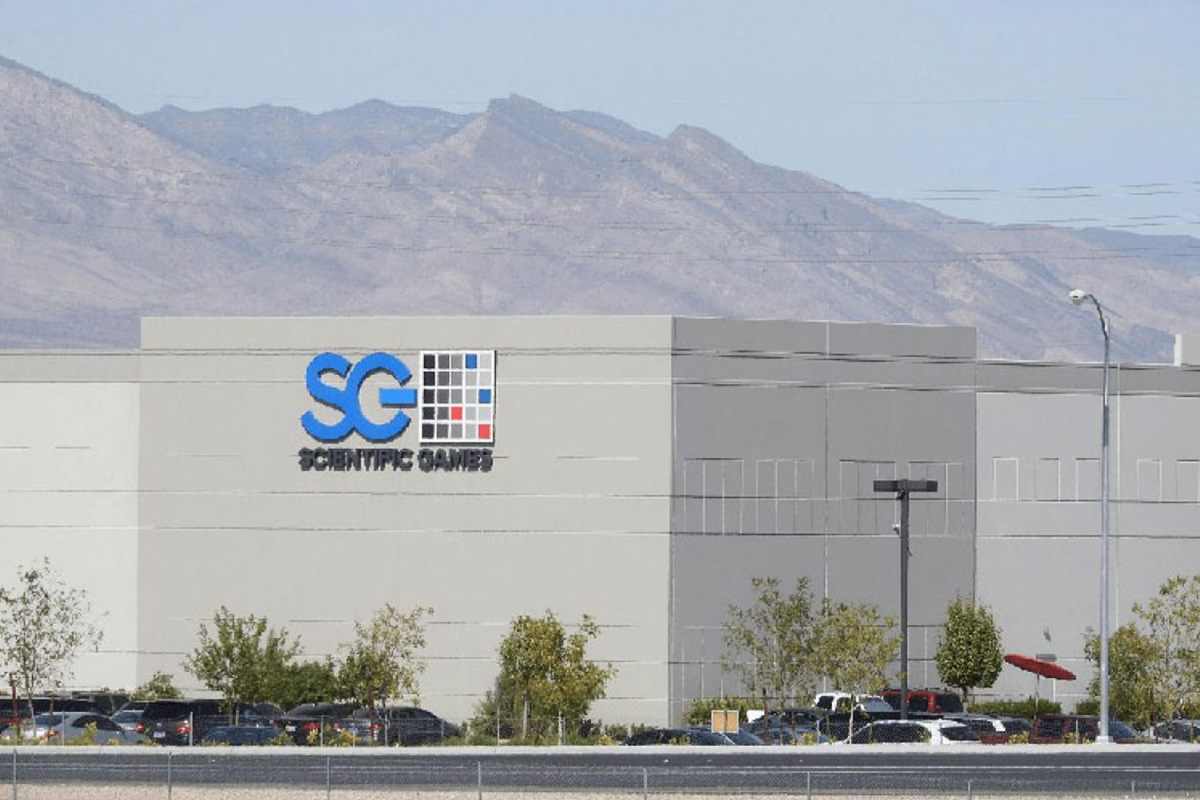 Under the deal, Scientific Games will launch its new SYMPHONY gaming systems technology with Lotto Hessen, migrating the AEGIS gaming system it currently provides to the operator.

In the first phase of the modernisation plan, Scientific Games’ OGS Open Gaming System will connect to LOTTO Hessen’s internet system to give players throughout Germany access to a world-class online gaming experience directly via the Lottery’s website, in accordance with the regulatory framework.

“This is an important new era for LOTTO Hessen, with new business opportunities on a road paved by regulatory options from 2021 onwards. Thanks to Scientific Games’ agile, modular system design, we will be able to consolidate our wide spectrum of games and services and offer them to our players in a streamlined platform. This new agreement with Scientific Games enhances our strategic partnership, with the goal to strengthen LOTTO Hessen’s leading market position and enable future growth,” Dr. Heinz-Georg Sundermann, Managing Director of LOTTO Hessen, said.

“We thank LOTTO Hessen for their continued trust in our systems technology leadership with our SYMPHONY and OGS systems. We will continue to provide the best products that drive the most profits for our lottery customers, their retailers and players with technology that securely integrates all game entertainment product lines and offers operational efficiencies,” Scientific Games Lottery Group Chief Executive Pat McHugh said.