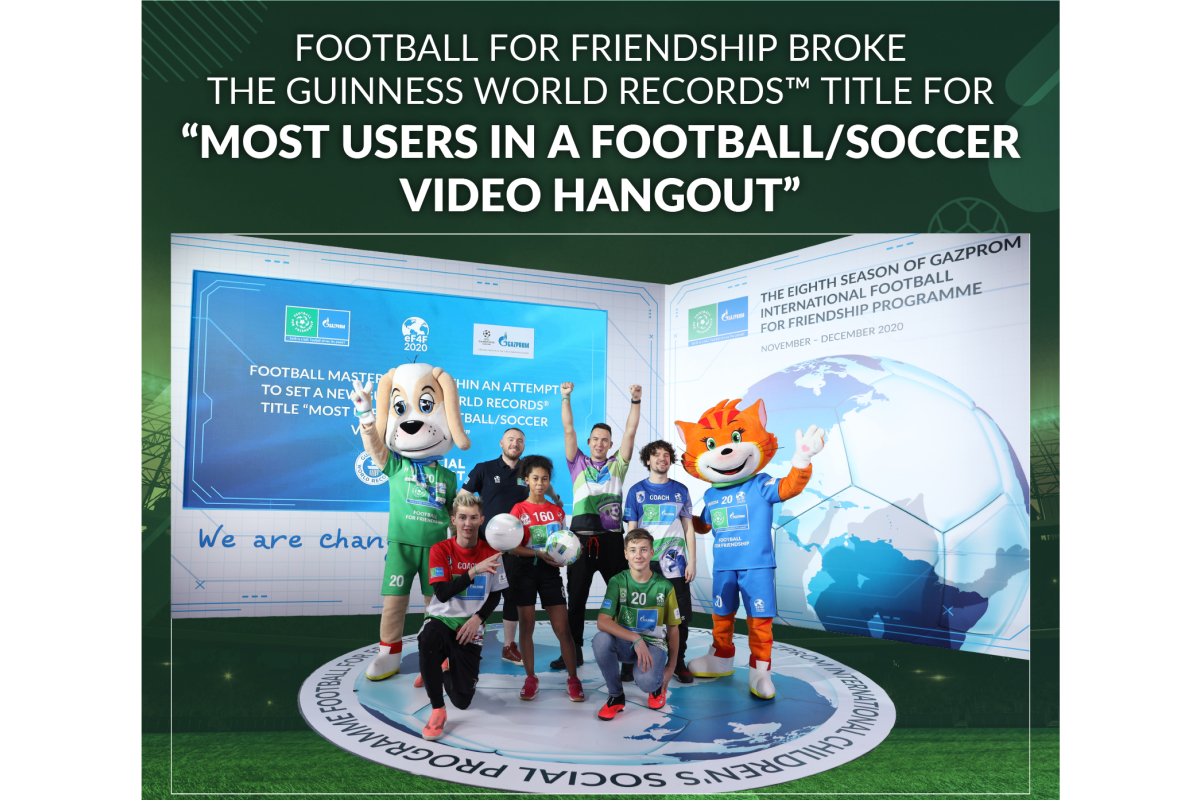 On December 5, 2020, a new GUINNESS WORLD RECORDS™ achievement was registered as part of the final events of the Eighth Season of Football for Friendship. Young Participants from over 100 countries in Europe, Asia, Africa, North and South America, Australia and Oceania, along with world-famous football stars, took part in the most popular online football event in the world.

The event lasting over two and a half hours with live video feeds from France, Brazil, Russia, Uruguay, Pakistan, Ireland, Cyprus, Peru, India, Guyana, and Spain was organized by the global operator of the Football for Friendship programme, AGT Communication Group. The GUINNESS WORLD RECORDS™ adjudicator was responsible for the accuracy in counting the event participants, registering the record in real time from London. Participants from over 100 countries repeated warm-ups, tricks, and shared their achievements with each other online. A total of 1 009 master class participants were recorded. Among the co-authors of the world record are the World Cup winner Roberto Carlos, six-time world football freestyle champion Melody Donchet, two-time world football freestyle champion Anton Pavlinov, France freestyle champion Andreas Cetkovic and dozens of football masters and world-famous freestylers from different countries.

The global master class became a beautiful way to round off the first season of the international Stadium Is Where I Am YouTube show, launched by Football for Friendship. From July to December, the world’s best freestylers and footballers taught children football tricks, shared the secrets of sporting skills, and gave away unique prizes.

“The Stadium Is Where I Am is a very useful project, where you can share your experience with young people from all over the world! It is a great honour for me to inspire young people and pass on my love for freestyle football so that this sport can continue developing further. I hope they will continue training and never give up, just like me”, supports the initiative the reigning freestyle champion Melody Donchet, sharing her impressions.

In 2019, the Gazprom International Children’s Social Programme Football for Friendship obtained another GUINNESS WORLD RECORDS™ title for the Most nationalities in a football (soccer) training session in history. In 2020, participants of the Football for Friendship programme from all over the world once again proved that you can overcome any barriers in achieving your goals.

The 2020 season of the Football for Friendship programme is held online. The season finale will be broadcast live on December 9, 2020.

Q&A: Sportingwin and the Bulgaria opportunity 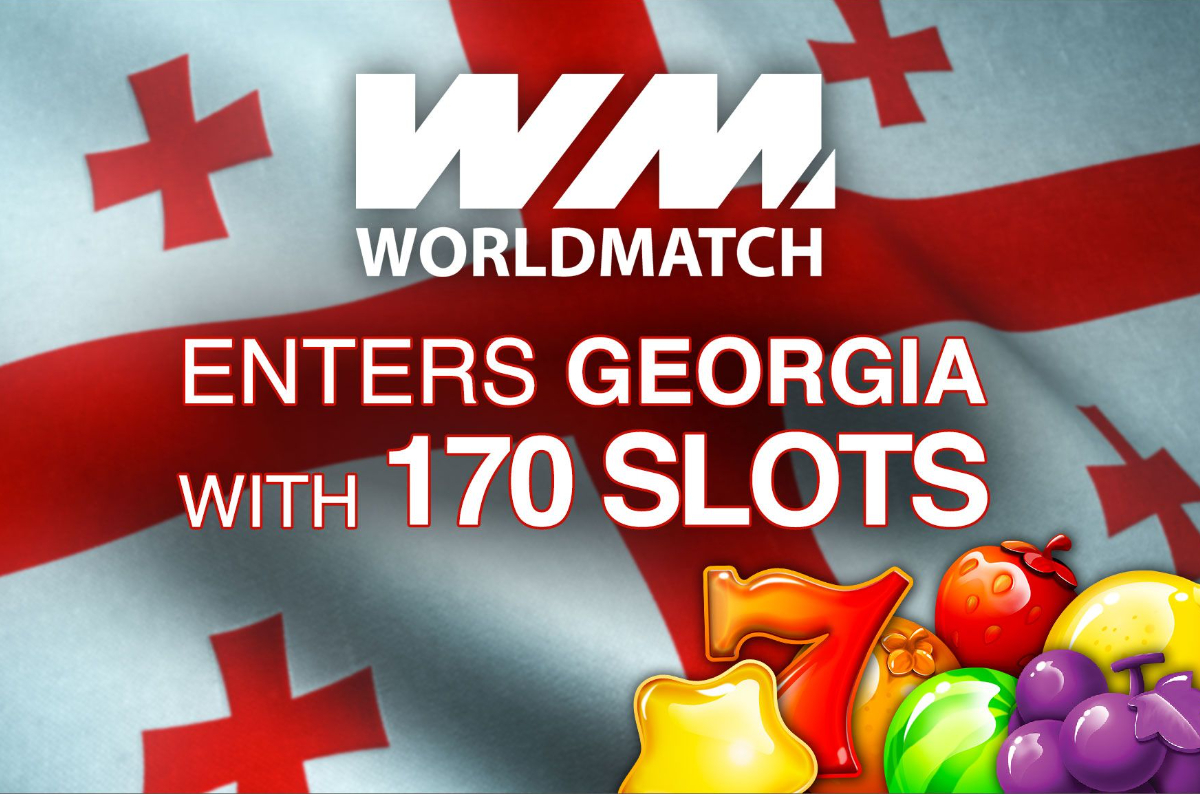 WorldMatch is very pleased to announce an important step forward in the CIS region expansion.

All of WorldMatch’s games have been declared aligned with the “Georgia Ministry of Finance, Requirements for Online Gaming Systems, Order no 243 as of 1 October 2020“.

The wide selection is one of World Match’s key points, there’s a huge variety of games and every Georgian player will be able to find what best suits him.

Georgia joins the regulated markets where WorldMatch already distributes its games to the best operators, these markets are:

“We are glad to announce that WorldMatch can now offer Georgian players a truly great gambling experience on a top technology platform in a safe and secure environment. We’re sure these are just our first steps in the CIS markets and are looking forward to our next ones.” Comments Andrea Boratto, CEO of WorldMatch. 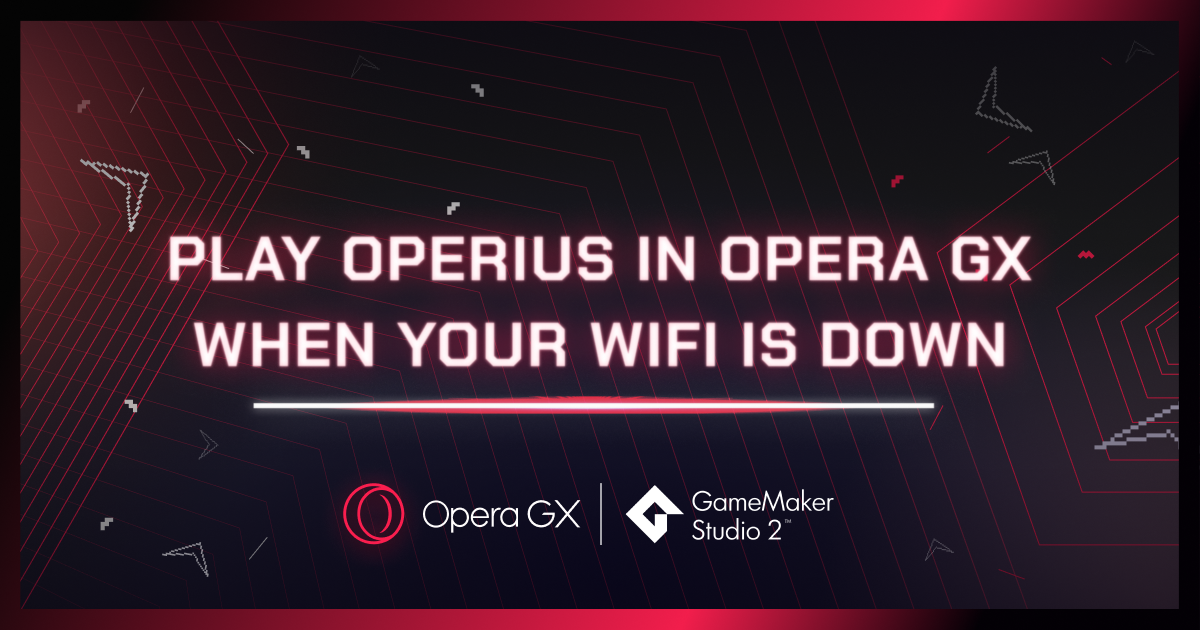 No WiFi? No problem! Created in GameMaker Studio 2, Operius has won the Game Jam to become the Opera GX Browser’s first offline mode game and is playable starting now

We’ve all experienced the unexplainable horror of having to deal with some flakey internet connections. In those moments where the WiFi is gone, Operius will help take your mind off your frustration with its fast-paced arcade gameplay. Created in the game creation suite GameMaker Studio 2, Operius is playable in the Opera GX browser today. The game will appear whenever your network crashes. Those with a stable connection who really want to try Operius, can simply type opera://operius in Opera GX’s address bar.

Designed by Mors, Operius is set in a world where all of the world’s computers simultaneously lose their connection to the internet, with a strange UFO that is hovering in the sky appearing to be the cause of the outage. The only way to restore the planet’s internet is to navigate through the inner workings of the UFO and take it down from the inside, a task that involves shooting hordes of alien invaders and dodging obstacles to advance to the next level.

In July, Opera GX launched its “No Internet” Game Jam to find the game that would keep its audience of more than 10 million gamers entertained whenever they lose their connection. With more than 900 entries, all created in GameMaker Studio 2, the competition was ferocious. But one game, Operius, elevated itself above the rest and emerged triumphant after topping the public polls that saw eight hand-picked games garner over 100,000 votes from the Opera GX and GameMaker communities.

Operius features razor-sharp, retro-inspired vector graphics which pay homage to the great space-based arcade shooters of the eighties with a pulsating high-adrenaline soundtrack written by Catonator. Being offline doesn’t mean you can’t play together: Operius features an offline two player mode: all you need to do is share your keyboard with another person and enter the two player mode.

‘We believe gamers deserve a better game than jumping dinosaurs or surfers. That’s why we started the Opera GX game jam and found Operius. Operius is a highly addictive ultimate offline game to rule them all,” said Maciej Kocemba, Head of Opera GX.

“With Operius, I wanted to make a fun arcade-inspired shooter to take the players’ minds off being offline and perhaps even make them forget they were supposed to get back online in the first place,” said Mors.

‘In creating the shortlist, we were looking for a game that’s fun to play, looks and sounds fun and, most importantly, that you want to play over and over again,’ added Kocemba.

Alongside becoming the new offline game in Opera GX and saving many a gamer from what is otherwise an incredibly frustrating experience, Operius developer Mors, also receives a $10k cash prize. Two runners up Aliens Stole My WiFi and Nettie & Settie Save the Internet also each receive cash prizes of $7k and $3k respectively.

Luckily, users won’t have to rip out their router to play Operius, as it is available to play when you don’t have connection issues in GXC. GXC is Opera’s upcoming self-publishing platform and will allow indie game makers to publish their GameMaker Studio creations directly to the platform and for free – for other users to enjoy and give instant feedback. Operius, as well as Aliens Stole My WiFi and Nettie & Settie Save the Internet will be available in GXC. 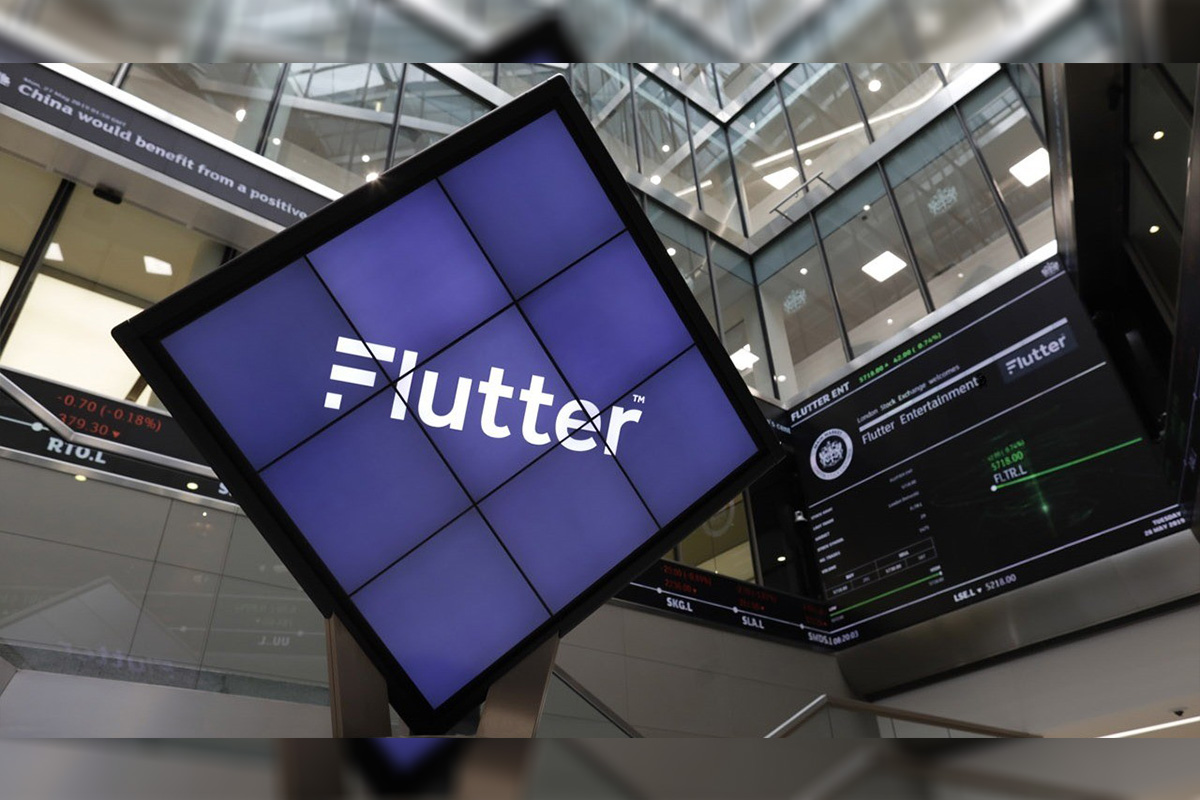 Flutter Entertainment’s new £15m UK technology and innovation hub in Leeds is now officially open to colleagues from across its UK and Ireland and International divisions.

Designed by MEPC, the state-of-the-art workspace is home to 1700 colleagues and comprises 136,000 sq. ft of flexible space across eight floors at 4 Wellington Place in Leeds Dock – a thriving community for the media, technology, and creative industries. It has been built to the highest environmental standard, achieving a BREEAM Excellent rating on completion and includes a range of accessibility and sustainable features, meeting the WELL building standard, which aims to make the work environment healthier for colleagues.

The hub will act as a centre of excellence in technology and innovation for Flutter brands operating in the UK and Ireland, helping to drive innovation across the Group through the development of industry-leading digital products for consumers across the world, while providing highly-skilled jobs and a sizeable local investment in Leeds and the surrounding Yorkshire region.

The new site will be home to more than 800 technology professionals working in key functions such as its Global Sports Trading Platform, Digital Infrastructure, Platform Services, and Information Security. It will also include several unique attributes, including:

The hub will continue to promote SBG’s ‘Skills Academy’, which offers selected graduates a fully funded MSc in Digital and Technology Solutions from Sheffield Hallam University while they gain in-house experience working with technology teams across the business. To better represent the communities it operates in, SBG has also launched a self-funded version of the government’s Kickstart scheme, creating 13 new roles for young people at risk of long-term unemployment. These are spread across business areas and functions including marketing, finance, people, tech and design.

Conor Grant, CEO of Flutter Entertainment UK and Ireland commented: “Our new office in Leeds is our vision for the future of working and we are excited to welcome our colleagues to this modern, agile and flexible workspace. The entire Flutter Group has benefited greatly from the leading technology capabilities we have developed in Leeds through our talented and highly skilled workforce, and this investment demonstrates our ongoing commitment to both the city and our colleagues. We will also continue to be a positive force in the communities we serve, with our Skills Academy and Kickstart scheme offering exciting opportunities for young people to develop their skills.”