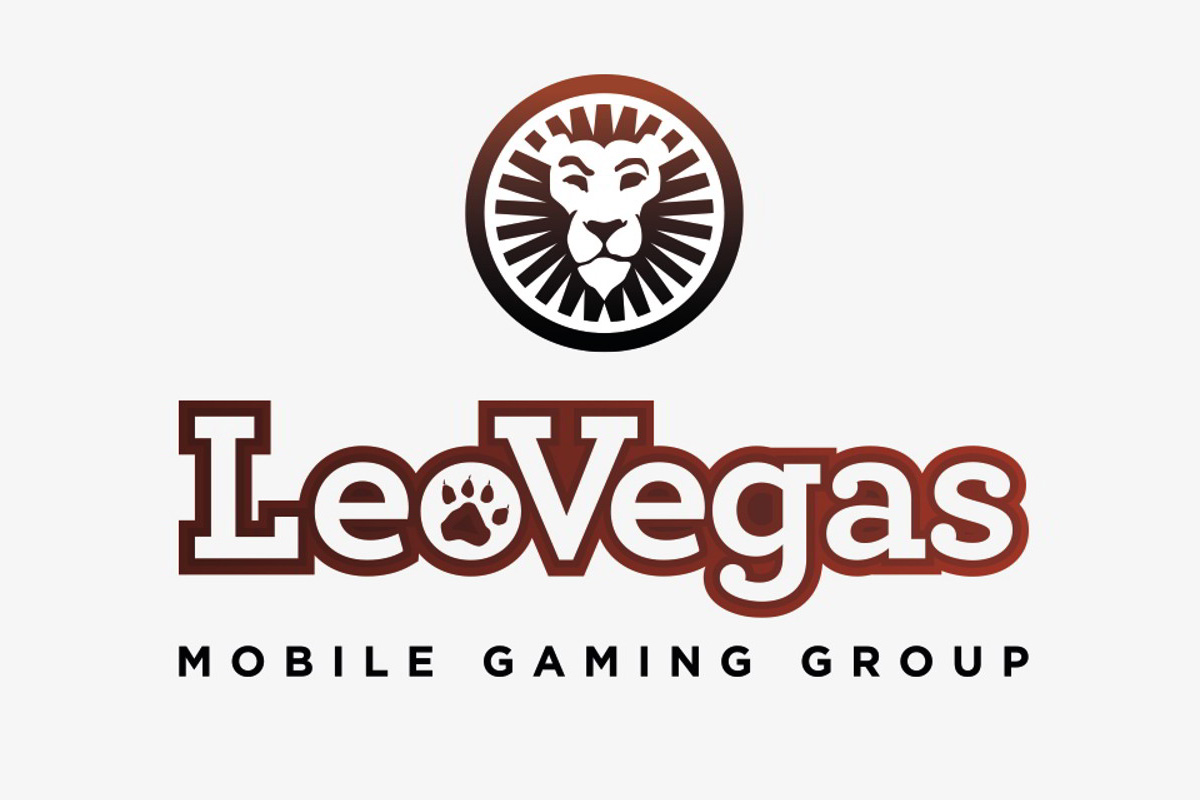 “All-time-high in Sweden and a strong start for Expekt” – Gustaf Hagman, Group CEO

EVENTS DURING THE QUARTER

EVENTS AFTER THE END OF THE QUARTER

SECOND QUARTER
Most of our markets have continued to develop well, with high, double-digit growth in key markets like Italy and Spain. The development in Sweden is encouraging, with record-high revenue during the quarter. We are also growing rapidly in North America, which now accounts for 10% of consolidated revenue. However, re-regulation in Germany continued to negatively impact figures during the period. Excluding Germany, Group revenue increased by 3% to a new record level despite tough comparison figures from the start of the pandemic during the second quarter of 2020 and greater competition from other entertainment activities as societies are now opening up again. We expect to see positive growth for the Group on a yearly basis during the third quarter.

Our operating profit decreased compared with the same period a year ago, while we achieved stable earnings compared with the preceding quarter. This is despite a high level of investments and a number of important, strategic ventures, including our forthcoming launch in the USA, a stronger focus on sports with the acquisition of Expekt, and our new game studio. Marketing costs in relation to revenue were higher than the historic average, coupled among other things to the relaunch of Expekt and investments in a number of key markets in which we see high customer growth. Investments in marketing during the quarter weighed down earnings short-term but are driving value long-term and will also enable us to accelerate out of the revenue drop in Germany. As revenues increase, the share of marketing investment will decrease. At the same time, we have maintained good cost control, and our operating expenses have more or less been unchanged over the last three-year period.

THE NEW EXPEKT
In mid-May we consolidated the acquisition of Expekt, and shortly thereafter “the New Expekt” was launched with a large and attention-grabbing marketing campaign ahead of the Euro 2020 football championship. It was a successful start, and in a short time we nearly doubled Expekt’s revenue and market share in Sweden since completion of the acquisition.

GERMANY
The situation in Germany coupled to re-regulation, with strict product limitations, an extremely high gaming tax and a skewed competitive situation, is having a negative effect on the Group. Revenue in Germany decreased by 81% compared with a year ago and accounted for only 4% of Group revenue during the quarter. We believe it will take time to create a balanced and fair market climate and have therefore chosen to shift our investments to other, more profitable markets. Over the long term we still believe that Germany, with Europe’s largest population, offers great opportunities for the Group.

NORTH AMERICA
Our forthcoming expansion to the USA, starting with the state of New Jersey, is on track. We are currently working on adapting and certifying our technical platform, and during the autumn we will also begin establishing a local organisation. We expect to accept our first American customers during the first half of 2022.

The Canadian province of Ontario, which is home to roughly 40% of Canada’s population, is conducting preparations to introduce a local licence system for online gaming. LeoVegas has built up a strong brand along with a large and loyal customer base in Ontario and the rest of Canada, among other things with help from former hockey legend Mats Sundin. According to our assessment LeoVegas is one of the larger and most well-known casino actors in the Canadian market.

During the second quarter, North America accounted for 10% of the Group’s total revenue and grew 33%. In pace with our continued expansion in Canada and forthcoming launch in the USA, revenue from North America will increase. This is in line with the Group’s strategy to diversify our revenues.

COMMENTS ON THE THIRD QUARTER
Revenue for the month of July amounted to EUR 32.8 m (30.7), corresponding to positive growth of 7%. Adjusted for Germany, the Group’s growth in July was 23%. 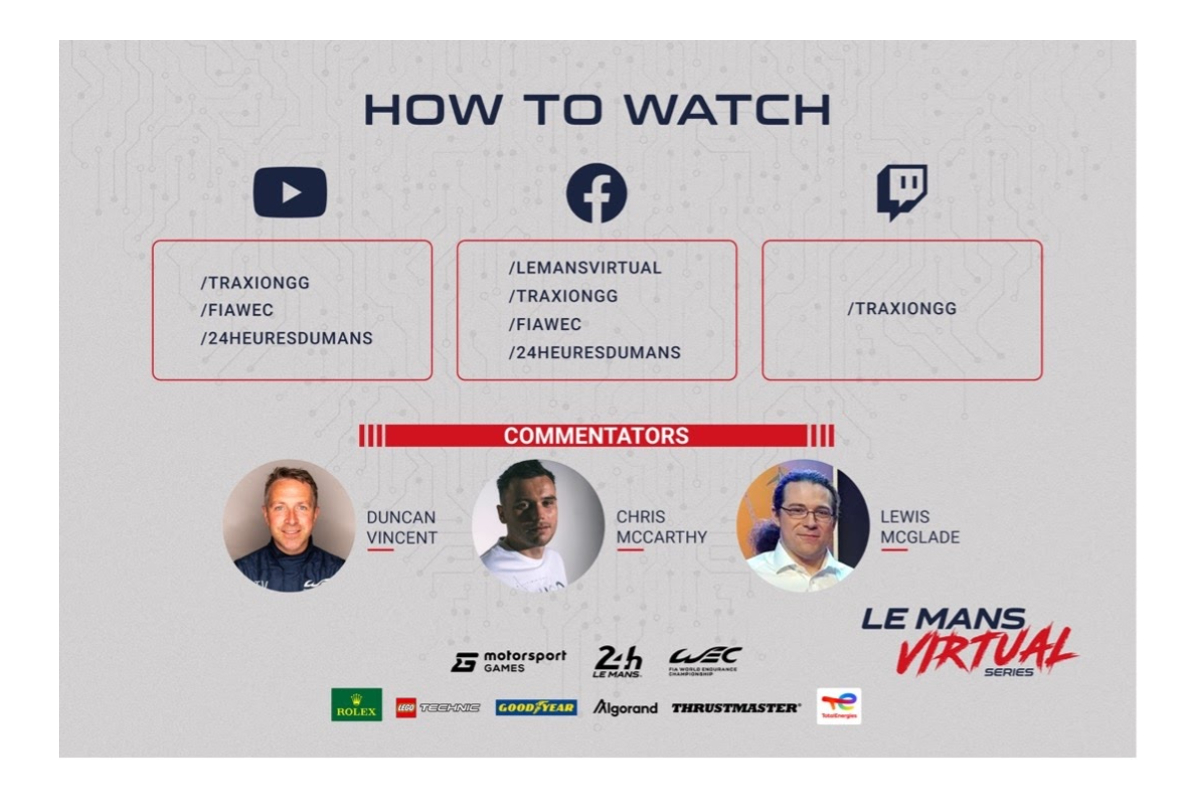 After a thrilling 1ST round that saw more than 2.6 million impressions worldwide, the 2nd stage kicks off at 7:30 a.m. EDT on Saturday

Motorsport Games Inc. announced that after a thrilling 1st race, the stage is set for round 2 of the Le Mans Virtual Series, the 6 Hours of Spa Virtual, slated for October 16, 2021 at 07:30 a.m. EDT. Saturday’s race will feature 38 entries (entry list HERE). Le Mans Virtual Series is a joint venture between Motorsport Games — a leading racing game developer, publisher and esports ecosystem provider of official motorsport racing series throughout the world — and the Automobile Club de l’Ouest (“ACO”) — the creators and organizers of the world-famous 24 Hours of Le Mans and promoter of the FIA World Endurance Championship (the “FIA WEC”).

The 2021-22 season of the Le Mans Virtual Series consists of 5 rounds, the 2nd of which is the 6 Hours of Spa Virtual. The 38 prototype and grand touring endurance entries will compete virtually on the infamous 7 kilometer Belgian circuit, including famous corners and bends such as Eau Rouge, Raidillon, Stavelot and La Source. The live broadcast will feature lead commentary by FIA WEC’s Duncan Vincent, together with Chris McCarthy and Lewis McGlade.

Round 2 of the Le Mans Virtual Series comes on the heels of a successful 1st round that saw more than 2.6 million impressions worldwide and a thrilling victory from Realteam Hydrogen Redline. The 1st round of the esports endurance racing championship was an action-packed and incident-filled 4 Hours of Monza on September 25, 2021. Monza’s more than 2.6 million impressions on official channels during race week alone set the stage for a wildly successful series. Viewers can expect even more thrills and excitement for this coming round! Realteam Hydrogen Redline’s drivers Dani Juncadella, Jeffrey Rietveld and Michal Smidl took 1st place overall, while GPX Rebellion Esports and team Floyd Bykolles-Burst finished in 2nd and 3rd place, respectively. Mitchell Dejong, Mack Bakkum and Martin Kronke from the Porsche Esports Team took the Le Mans Grand Touring Endurance honors in a class that featured no fewer than 5 different manufacturers represented.

The Le Mans Virtual Series brings together top-level, real-life drivers such as Jenson Button, Alex Palou, Stoffel Vandoorne, Louis Deletraz and a number of the world’s other best sim racers to compete together in 5 endurance races that range from 4 to 24 hours in duration. This year’s series will conclude with the 24 Hours of Le Mans Virtual, which will take place live and televised at the Autosport International (“ASI”) show in Birmingham, UK in January 2022.

Here is where you can follow all of the weekend’s action, live and uninterrupted: 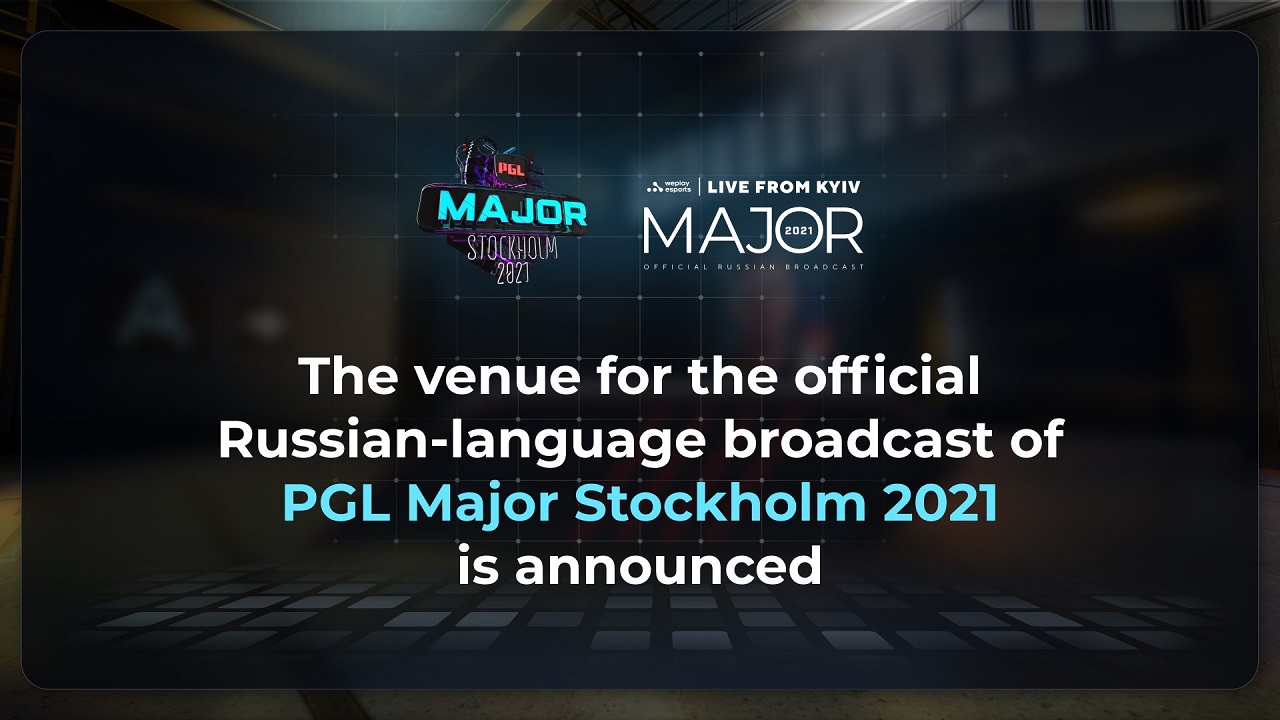 The Russian-speaking talent crew will broadcast the tournament from the WePlay Esports studio.

WePlay Esports will be the official Russian-speaking streamer of the tournament, in a deal brokered by IMG on behalf of PGL. The talent team and broadcasting studio will be working from the WePlay Esports studio.

WePlay Esports has experience in organizing analytics studios in-house: BLAST Premier: Fall Season 2021, the WePlay Academy League, WePlay! Clutch Island etc. are cases in point. The broadcast will be organized in accordance with the standards and best traditions of the company, matching the visual identity of the English-language broadcast from PGL. The studio is equipped with the latest technology, and the company is in the final stages of preparation for the broadcast, adding finishing touches to the graphics, augmented reality (AR) elements, and content.

“We are ready for any kind of challenge, even for broadcasting several tournaments from different venues simultaneously. Our studio and arena in Kyiv, Ukraine, and the arena in Los Angeles, the U.S., which will be opened soon, allow us to create high-quality engaging content, which the esports community appreciates a lot.I can say with confidence that the quality of the broadcast, its content, and the set-up will be on par with the level of the Major,” comments Maksym Bilonogov, chief visionary officer and general producer at WePlay Esports. 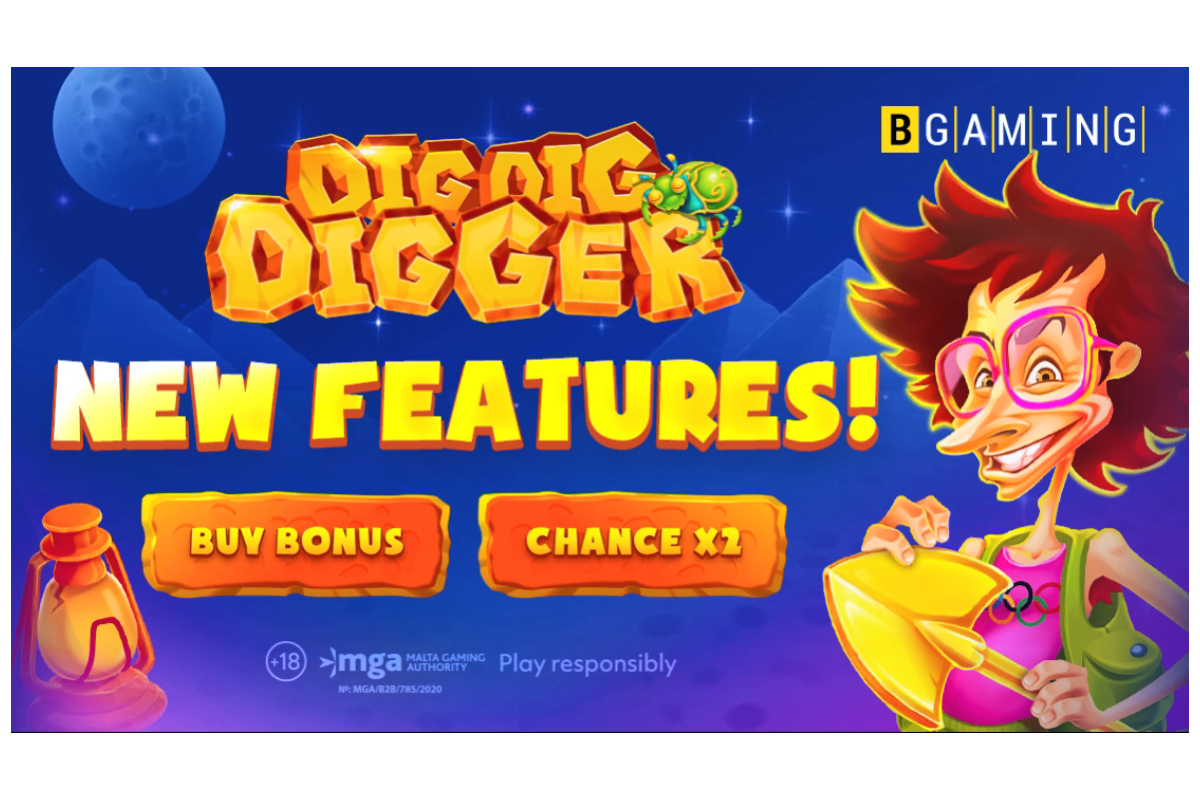 BGaming continues improving its popular titles by adding new extra features! So, the Dig Dig Digger slot now offers players the opportunity to buy a bonus and double the chances!

In addition to the set of standard features, the new Buy Bonus feature allows players to start a Free spin round with Expanding symbols immediately. To make it more captivating, BGaming gives exclusive opportunity to choose the number of Expanding symbols they want: from 1 to 9! The other game’s novelty is Chance x2 feature that increases the bet and gives the player more chances to play bonus games. These two new bonuses cannot be used at the same time, however, each of them provides many opportunities for great winnings!

“From release to release we analyze players’ preferences, and we see that it’s always a good idea to give players the opportunity to choose extra bonuses. We have already added buy bonus and double chance feature to Aloha King Elvis slot. We received great results! Our next step was to upgrade Dig Dig Digger. The slot which was launched in May shows good feedback from players!” noted Katherine Puteiko, CS Marketing Manager at BGaming.

With HD graphics and a 5×3 scheme, Dig Dig Digger has a popular “book of” mechanics. Moreover, the charismatic and hilarious archeologist – the main character – сompletes spins with jokes and funny moments! By the way, every player can try on the role of the charming archaeologist on Instagram too. BGaming studio has prepared a Dig Dig Digger’s Instagram mask that you can find by searching for the name of the game or by following the link.

Inspired by the story of funny Digger, BGaming team is going to launch the sequel of the slot. The release date of the new adventure will be announced later.

BGaming is a creative and forward-thinking game provider converting gaming into gaming. Thanks to an expert team and a player-driven approach the studio creates innovative and engaging products featured on reputable platforms and 550+ online casinos worldwide. BGaming is the world’s first to support cryptocurrencies and offer Provably Fair games. Today the brand’s portfolio includes 70+ products with HD graphics and a clear user interface for every device.