The Six Muskotiers, the futuristic free-to-play mobile game with blockchain-based elements, launches its closed alpha release. Users can play the real-time strategy game (RTS) as one, or up to three, of the six dynamic characters on a futuristic journey to save mankind and their pet dog from an evil AI. MSKO, the blockchain-based token, can be used for in-game transactions and player rewards.

Many games are redesigning their monetization and business models to appeal to consumers, causing developers to abandon initial payments and in-game paywalls. Developers must competitively differentiate themselves to appeal to players with endless options and a shortened attention span, hence the declining inclusion of a financial barrier.

The Six Muskotiers is a free-to-play game. The unique ecosystem centers around bidirectional microtransactions between both the players and the game, allowing for the distribution of value to players through MSKO. Players can also make purchases using fiat, but these players cannot subsequently own or mint their assets into NFTs, like players using MSKO can. Community engagement fuels the platform, so players stand to receive greater in-game rewards the more they contribute to the game’s success. The Six Muskotiers also prioritizes philanthropy and will donate a portion of all tokens to charities and social good initiatives.

The Six Muskotiers caters to casual and mid-core gamers, merging advanced gaming features with the simplicity and short length of casual games. Muskotiers is accessible to gamers of all levels, with a highly intuitive user experience and short gameplay sessions, ideal for immediate enjoyment.

“We are thrilled to introduce our game as it truly prioritizes player enjoyment, with the focus on an elaborate storyline and engaging characters,” says Bar Zer, CMO of Loopycore. “Games should be accessible without requiring an entry payment to play or excessive time to win. The Six Muskotiers offers players a succinct, yet engaging game experience and we are excited to watch our community flourish.”

TVBET expands its presence in Poland through a deal with GoBet Deutsche Telekom is expanding its activities in the field of blockchain technology by including the second largest blockchain in the world. DT’s subsidiary, T-Systems MMS, provides the Ethereum Network with infrastructure in the form of validation nodes. Validators play a key role in the operation and security of blockchains.

Ethereum uses the cryptocurrency Ether (ETH) as a means of payment for transactions. After the so called “Merge”, Ethereum recently relies on Proof-of-Stake (PoS) for consensus, which, in addition to laying the foundation for future scalability improvements, significantly reduces the blockchain’s energy requirements. T-Systems MMS maintains sustainable blockchain networks and, therefore, supports the transition to PoS by operating validation nodes.

In addition, the Deutsche Telekom subsidiary cooperates with Stake Wise. StakeWise offers liquid staking pools, which allow users to keep their ETH tokens without having to operate validator nodes themselves. As a result, the entry barrier for investments in cryptocurrency is lowered.

“Our cooperation partner StakeWise collects individual Ether tokens from many different owners and merges them into validator nodes. These validator nodes are provided and operated as infrastructure by T-Systems MMS. Staked Ether tokens remain available to the owner in this construct – liquid – and can be used in other Decentralised Finance (DeFi) applications,” Dirk Röder, Head of Blockchain Solutions Center at T-Systems MMS, said.

The Deutsche Telekom subsidiary also participates in the governance of StakeWise and has joined the so-called Decentral Autonomous Organisation (DAO). In this way, T-Systems MMS contributes to transparency and security in the Ethereum network.

“After collaborating with Flow, Celo and Polkadot, we are now taking the next decisive step in the blockchain world and are doing pioneering work here with Ethereum. As a node operator, our entry into liquid staking and the close collaboration with a DAO is a novelty for Deutsche Telekom,” Dirk Röder added.

“With the move to Proof-of-Stake, we expect strong demand and significantly increasing capital flows in the Ethereum network. We are therefore pleased that T-Systems MMS, as an infrastructure provider, is giving our protocol more reliability and making the Ethereum ecosystem safer overall,” Kirill Kutakov, co-founder of StakeWise, said. Web3 technology platform, Nefta, has announced a new partnership with Web3 strategy game, Medieval Empires from blockchain gaming studio, MoonGaming, in which they will provide its blockchain technology for its launch.

Medieval Empires is a multiplayer, blockchain, strategy game set in what is now Turkey, in the 13th Century. You will follow Ertuğrul Gazi, portrayed by Turkish TV and film star Engin Altan Düzyatan, a tribal warrior and a celebrated leader of the Kayi tribe as you face off against the future King of England, Edward 1st “Hammer of the Scots”. Build your own empire through trading, fighting, and forging alliances while expanding and building towns, as Edward embarks on the 9th Crusade, across Europe, towards the Holy Land.

Medieval Empire is hosted on the Polygon Blockchain, this proof-of-stake approach allows the developers to keep energy costs, and environmental impact low, securing MoonGaming’s commitment to sustainability. The game will be completely free to enter and will remove any technological blockers that might hinder players. Powered by Nefta’s technology, any web3 elements will be fully integrated into the game to allow seamless gameplay whilst allowing players to integrate their existing wallets across other platforms. The game will be available cross-platform on PC/MAC and mobile.

Land is an integral part of Medieval Empires’ economy and gameplay and will initially be sold by the game through the Polygon network NFT marketplace. The land within the game is divided into 6 tiers with the plots within each tier carrying distinctive features and resource generation capabilities. Tier 0 is reserved for new players, only the upper 5 Tiers can be bought. Land owners will also get the opportunity to upgrade the land with the help of in-game NFT structures.

Geeshan Willink, CEO and Co-Founder of Nefta, said: “The team at MoonGaming have got the experience and backing to create an excellent Web3 product and we are delighted to announce our partnership with them to help create Medieval Empires. By removing the roadblocks commonly found in Web3 gaming projects we can offer a comprehensive, end-to-end solution and foster the next generation of Web3 games.”

Jan Berkefeld, CEO at MoonGaming, said: “Team Medieval Empires is looking forward to providing the next-gen blockchain gaming experience to all – thanks to our strategic cooperation with Nefta. We are glad to have an experienced team assembled with crypto megastar Carl ‘The Moon’ Runefelt at the helm and with actor Engin Altan Düzyatan as the face of this game. Together we are working to create something unique in the Web3 gaming space.”

Assad Dar, Co-founder and Chief Visionary Officer at MoonGaming, said: “Medieval Empires will be accessible and always free-to-enter. It will be sustainable, running on the Polygon blockchain, and it will give players the power to play-and-own and keep everything they make in-game.” 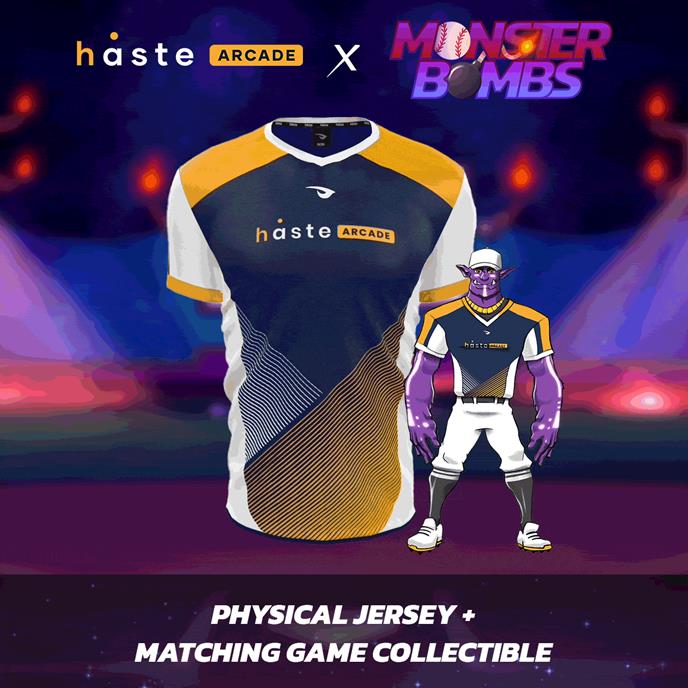 The Haste Arcade has released its newest game – Monster Bombs, a space-themed baseball game built on the BSV Blockchain.

It features the world’s first physical and digital copy NFT items that can be equipped within the game, along with Haste’s patent-pending Instant Leaderboard Payout™ technology.

The game’s main character, Tank, is trapped on the planet Avachrome, and must compete in the planet’s home run derby to get off the dreaded planet. Players must hit a variety of pitches, while avoiding the bombs that occasionally get thrown at Tank. Points are accumulated by not swinging at the bombs, hitting singles, doubles, triples, home runs, and “Monster Bombs” (supercharged home runs). The more points a player gets, the higher up the leaderboard their score is.

Along with the collectibles, the game also features Instant Leaderboard Payouts™, which give gamers a new way to play and earn from casual games. For example, players can play Monster Bombs for free, but if they want the chance to earn, they can also play at different paid levels ranging from $0.01 all the way up to $100 per game. If the player makes a level’s leaderboard, they earn a percentage of each subsequent gameplay. The payouts are instantly deposited to their Bitcoin SV wallet in the form of a micropayment, and the player will continue earning until their score is no longer on the leaderboard.

Joe De Pinto, co-founder of Haste, said: “We are extremely excited with the release of Monster Bombs. The gameplay is impressive for a casual home run derby, and the ILPs add an extra level of excitement for the players. We really think it is the most unique home run derby game on the internet.”

De Pinto continued: “The game also serves as a demonstration of what blockchain technology and Haste can do for professional sports franchises. To our knowledge, there has never been a physical item a fan could purchase, receive a digital copy NFT of that item, and then actually use the NFT within a video game.

“Imagine every shirt, jersey, and hat at the New York Yankees team store coming with an NFT that a fan can go home and equip on their player in MLB The Show. You will be wearing your real jersey that you just bought and playing with it in the video game at the same time! This concept is going to be a massive way to drive fan engagement outside of the ballpark.”