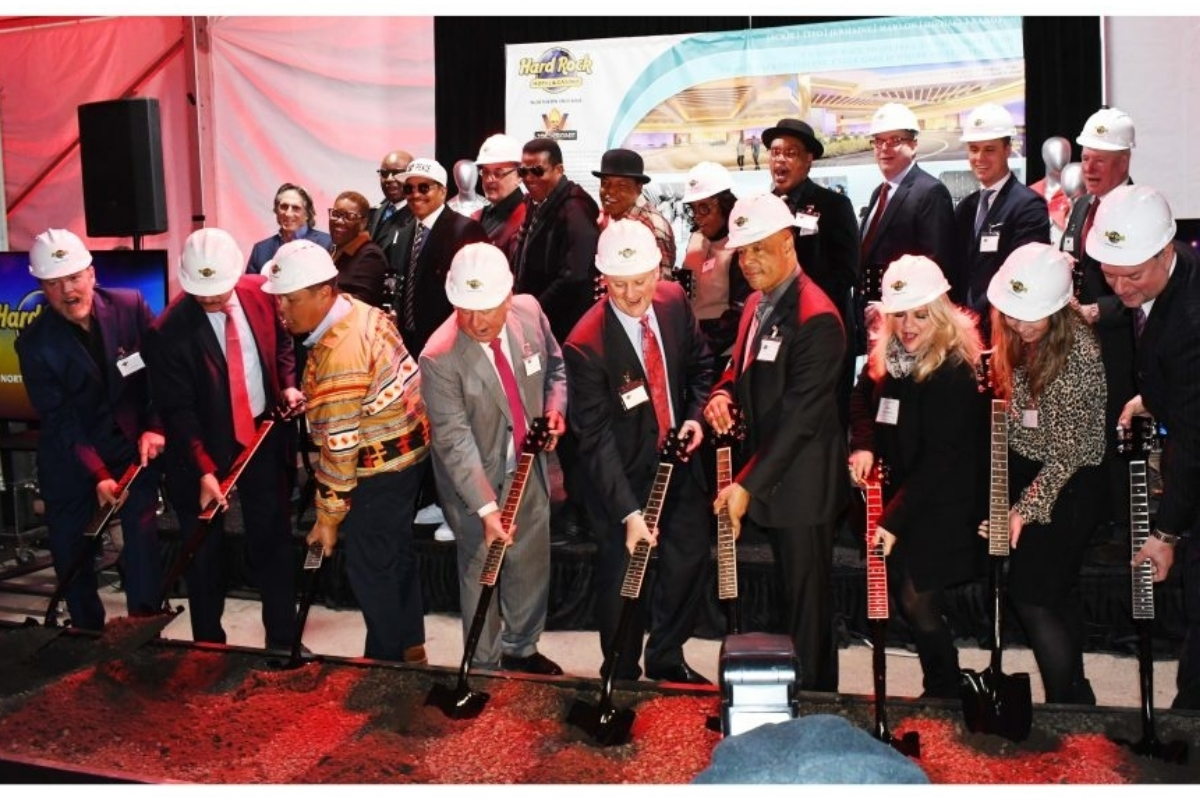 The premier 200,000-square-foot entertainment complex is a joint venture between the two companies and will include six food venues, a sportsbook, a retail shop, a 2,000-seat showroom and more than 2,130 gaming positions. Phase two of the project will see the addition of a 200-plus-room hotel and a multi-level parking garage.

Guests of Honor at the ceremony were Tito, Jackie and Marlon Jackson, of the world-renowned Jackson family. The brothers began their career while residing in Gary and returned to the area as a group for the first time in fifty years. With hits like “I Want You Back” and “Never Can Say Goodbye,” The Jacksons are known as one of the most influential families in musical history.

Hard Rock Casino Northern Indiana is forecasting more than $20 million annually in tax revenue and payments to the City of Gary and surrounding communities. Approximately 1,000 construction jobs, with an emphasis to hire union labor, and an estimated additional 500 jobs are expected. With a location adjacent to the 80/94 Burr Street interchange and approximately 193,000 cars passing daily, the expectation is to become the leading entertainment destination for the entire Northern Indiana region.

Additionally, Spectacle Entertainment has a commitment to local investment with a pledge to work with minority and women owned businesses. Currently all 17 senior leaders at Spectacle’s Majestic Star Casino are board directors for local charitable and community organizations in Gary and the Northern Indiana region. The team has sponsored, participated and volunteered for multiple local events and programs throughout the year, with a plan to directly drive more than $500,000 in fundraising in 2020.

Ratcliff stated, “Breaking ground for Hard Rock Casino Northern Indiana is the start of an incredible partnership between Spectacle Entertainment, Hard Rock International and the City of Gary, Indiana. It is an honor to be here today and to see this dream become a reality. A lot of work has gone into this project, a lot of planning. I’m grateful to all those who played a part in it. There is no doubt this is a game changer for Gary, Indiana and the entire Northern Indiana region.”

Hard Rock has a presence in 76 countries and is one of the most recognizable brands in the world. Spectacle Entertainment is confident the Hard Rock name will attract visitors through­out the region and beyond, maximize job creation, increase tax revenues, and greatly benefit the City of Gary and the State of Indiana.

“It’s an honor to partner with Spectacle Entertainment on this project, bringing the Hard Rock brand of world-class entertainment to Northern Indiana,” said Jon Lucas, Chief Operating Officer of Hard Rock International. “This property will be the premier casino destination in the region.”