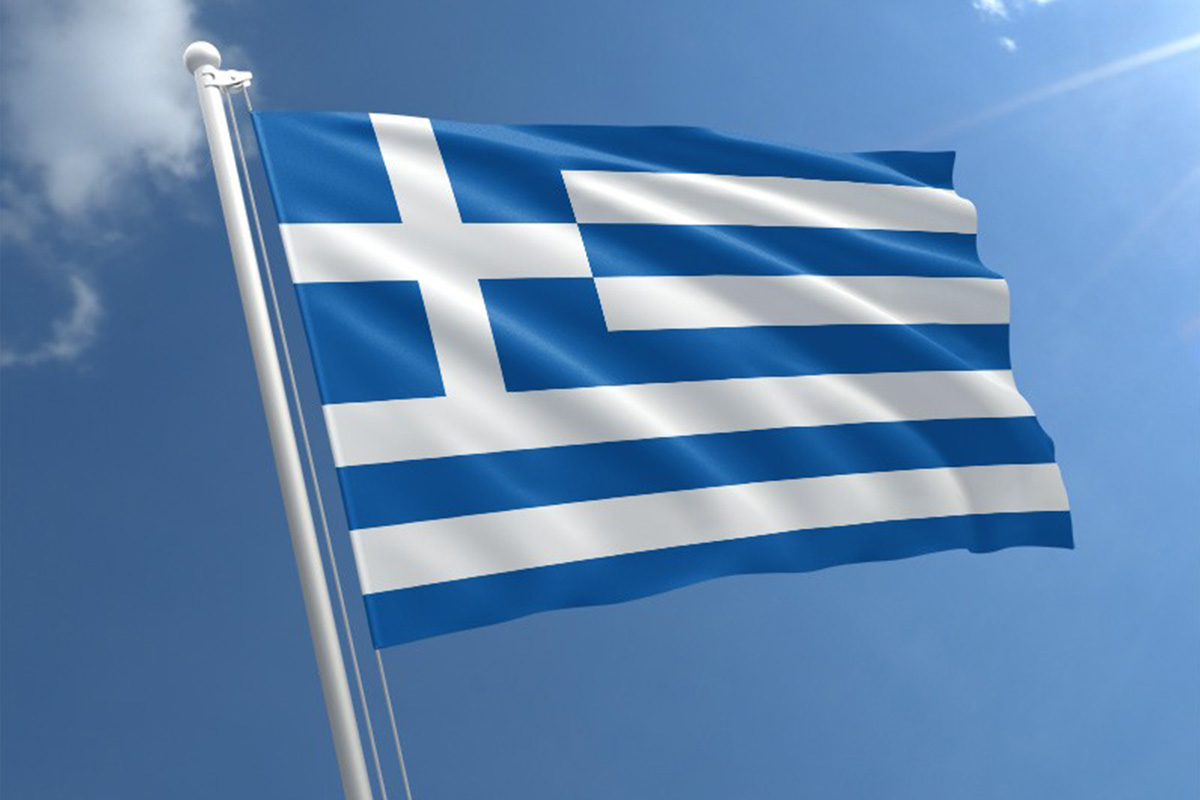 The Ministry of Finance of Greece has published its much expected and long-delayed proposals to restructure the country’s online gambling field. There is good news and bad news for the 24 gambling operators who have been functioning on “transitional” permits since 2011. The good news first. The 24 operators will get a chance to apply for new licenses. The bad news? They will have to shell out €4million for a new licnese for sports betting alone. For any additional gambling services like there will be an additional licensing fee of €1 million.

According to the new proposals, the new licenses will be valid for five years, and operators must apply for renewal at least one year in advance of the license expiration, with renewal fees equal to the original license fee.

Applicants must submit a deposit of €500k and demonstrate that they hold a license to operate online in another European Union market, along with records of their previous three years of financial performance.

Applications would not be available to any operator whose name has appeared in Greece’s online gambling blacklist in the 12 months prior to submitting their application. Among the most recent additions to the blacklist include multiple brands associated with UK-listed GVC Holdings.

It also remains to be seen whether the unresolved €187m back-tax demand submitted in January to GVC will preclude the company from either applying for or receiving a new Greek license. GVC has put aside money to cover this tax obligation, which it is challenging in court.

Applicants must base their Greek-facing operations’ servers within the country and establish accounts with locally licensed payment processing institutions. Operators must also conduct their Greek-facing business via a dot-gr domain.

The new licensing plan includes a variable tax on online gamblers’ winnings, which are to be withheld by the operator for remitting to the taxman. Winnings under €100 would not be taxed, but winnings above €100 but less than €500 will be hit with 15 per cent tax, while winnings above €500 will be taxed at 20 per cent.

The government’s list of its new online rules do not specify whether it has had a change of heart regarding its original plans to tax operators’ revenue at 35 per cent. Given Greece’s significant unpaid debts to its international moneylenders, it seems doubtful that the government would offer operators any breaks on this point.

The Ministry has opened a consultation into its proposed online regime, and interested parties are invited to submit their proposals, opinions and comments by October 5. Applicants will learn of their acceptance within two months of filing, and the failure to learn of a positive vote will be considered a rejection of their application.

Last month, Greece’s Gaming Supervision and Control Commission revealed that total online sports betting turnover at its 24 temporary licensees hit nearly €5.3b last year, around €300m higher than the previous year. Spending at Greek-facing operators not holding a local license was reportedly worth an additional €5b.

Leading iGaming content provider, Spinomenal has added a new dimension to its ever-expanding Universe with the timely release of Book of Aphrodite – The Love Spell. As we gear up for the Valentine’s season, this slot promises to leave your players feeling all warm and fuzzy inside on their hunt for riches.

The legend of Aphrodite will live forever, based on the story of the ancient Greek goddess of love and beauty. This mythical themed slot is the next stage in the Spinomenal Demi Gods Series and takes players on a thrilling journey to uncover the legendary story of Aphrodite’s powerful love spell.

This game has a 6×3 slot layout with 10 winning lines. Medium paying reel symbols are represented by beautiful images inspired by this legend of love including a shimmering pearl, a majestic dove, an ancient Greek bust of Aphrodite and a life-like image of the beautiful Goddess herself! The highest value symbol is the gleaming magical book of spells.

This also acts as the Wild. It possesses a scatter feature that will enable it to be counted as any symbol on the reels. Three or more scattered Wilds anywhere on the slot will pay 3- x2, 4– x25, 5– x250, 6- x500 and it will also activate 10 free spins.

During the Free Spins game, for every spin, a randomly assigned symbol (except for the scatter Wild) will act as the expanding symbol for that spin only. Once the slot result is determined, the expanding symbol will expand to form new pay-lines in addition to existing pay-lines, giving the player the opportunity to win up to x10000!

Spinomenal CTO, Omer Henya commented: “The beautiful aesthetics of this game combined with our renowned, innovative game mechanics are a winning mix and represent a fantastic, timely addition to the Spinomenal Universe.” 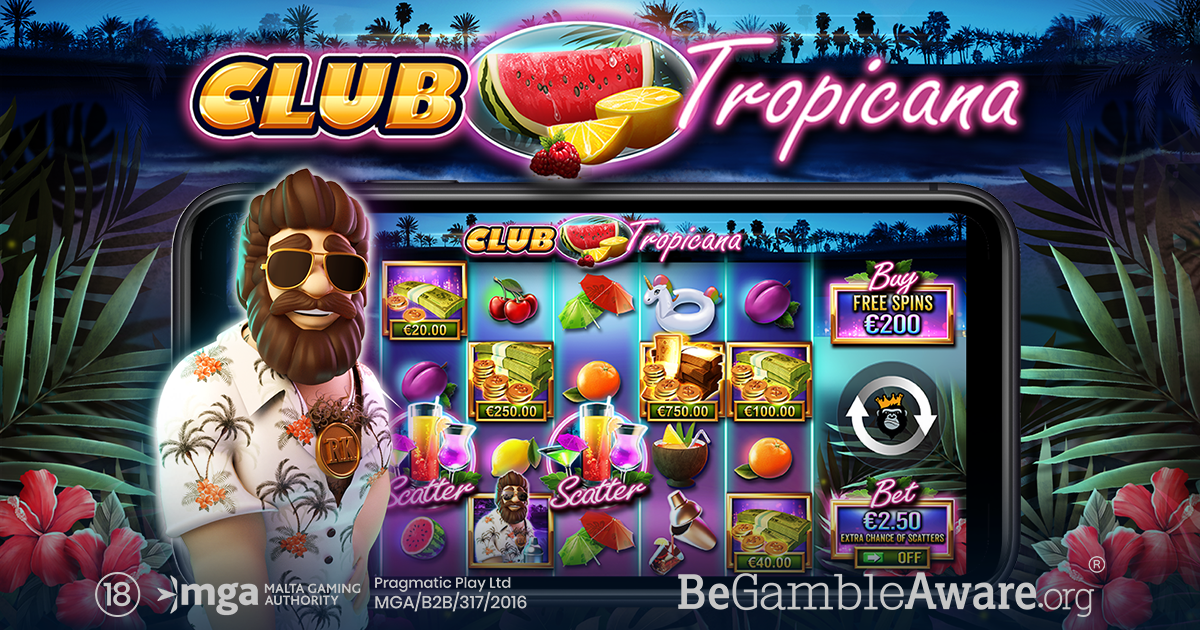 The provider delivers an exotic experience with Club Tropicana

Pragmatic Play, a leading content provider to the iGaming industry, is shaking up the marketplace with its latest release, Club Tropicana™.

Inspired by exotic drinks, fruit, inflatables and umbrellas are depicted as the symbols in this 5×4 slot. Players will be aiming to create matching combinations across the title’s 12 paylines to be awarded a win.

Money symbols also appear on the reels with instant cash prizes attached to them, however, they can only be unlocked in the free spins round. Awarded for landing at least three scatter symbols in the base game, 10 free spins are initially unlocked and additional scatters award extra spins up to a maximum of 20.

Here, a wild is added to the reels which collects all instant cash prizes on the game board. Every fourth wild collected unlocks a retrigger granting 10 additional spins and an incrementally increasing multiplier of up to 10x in total.

This slot release follows hot on the heels of recent hits like Fire Archer™ ,Monster Superlanche™ and Fish Eye™ which reside amongst a collection of over 300 unique titles in Pragmatic Play’s award-winning games portfolio.

Irina Cornides, Chief Operating Officer at Pragmatic Play, said: “In need of a highly volatile vacation? Then look no further than Club Tropicana™ where vibrant aesthetics are only outshone by the big win potential in our colourful new slot.

“Showcasing fan favourite mechanics seen in hit titles like Big Bass Bonanza™, Club Tropicana™ has a free spins round where players upgrade multipliers and retrigger free spins by collecting instant cash prizes which culminate in some huge wins. Additionally, there is a 4,000x instant cash prize found on the reels that truly demonstrates the volatility we have packed into this release.” 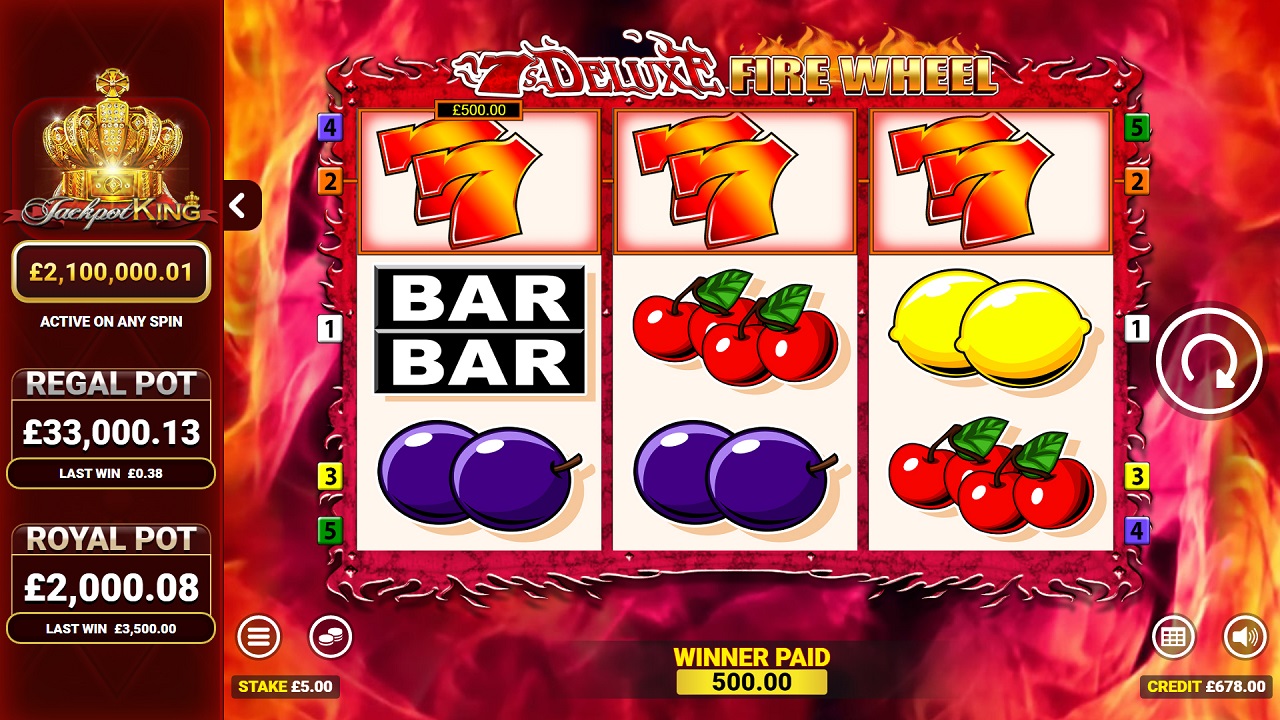 The classic fruits, bar and 7 symbols are back on a 3×3 reel set where matching combinations must be formed to claim wins. Flaming 7s act as a wild which substitutes for regular 7s while a whole window of the same fruit triggers the Fire Wheel.

In a classic wheel of fortune style, the Fire Wheel then spins and can multiply the initial win by up to 10x offering players the chance for huge wins.

Blueprint’s industry-leading Jackpot King system adds an extra layer of big win potential and creates another exciting title to expand the range of games through which players can land huge sums.

Jo Purvis, Director of Key Accounts and Marketing UK at Blueprint Gaming, said: “7’s Deluxe Fire Wheel Jackpot King is another dose of classic slots play and the action is augmented by the winning possibilities brought by the Fire Wheel and Jackpot King. It’s another flaming hot entry in the game family that is certain to raise temperatures as the prize pots climb.”