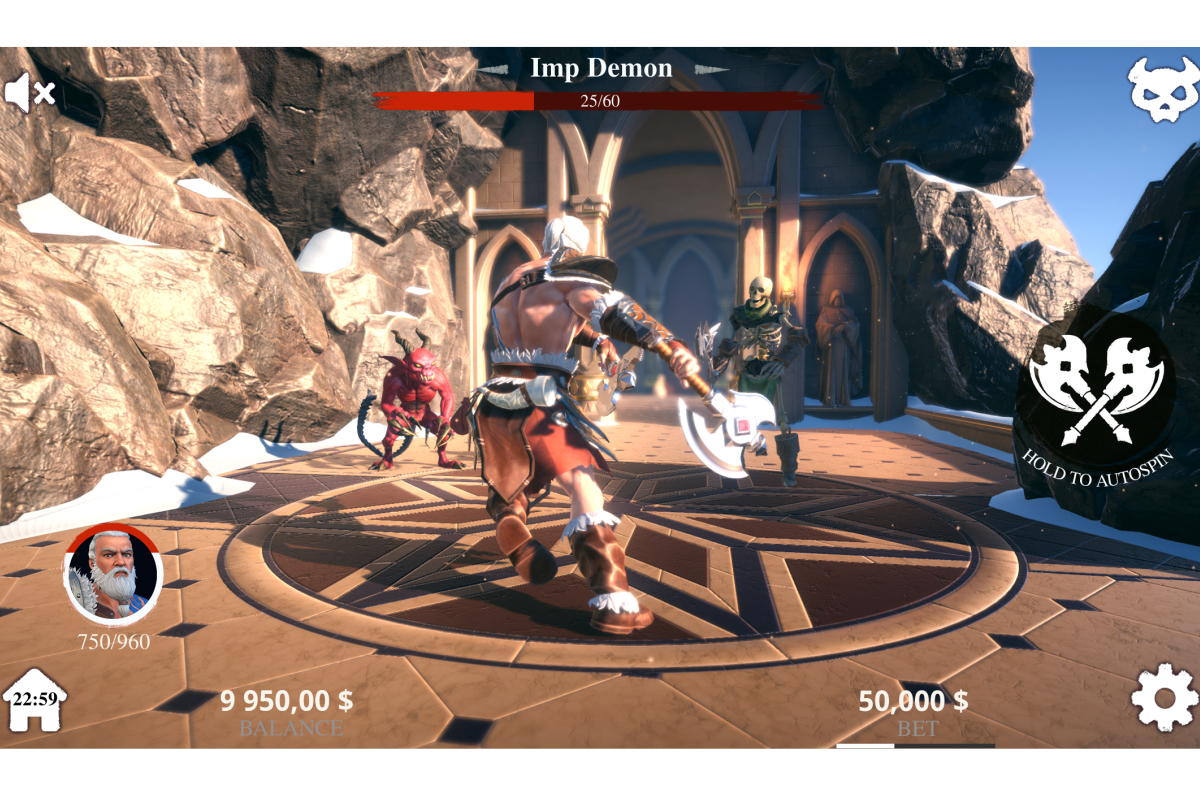 The result of over a year’s research and development, Dungeon: Immortal Evil harnesses the latest in 3D gaming technology to offer players the first ever slot-based third-person hack and slash adventure.

Designed to be truly HTML5 mobile-perfect for handheld gaming, it is unique in its slot-based gameplay. Rather than facing regular pay symbols and pay patterns, the game’s mechanics will be familiar to players of RPGs – following the player’s avatar throughout as he battles with the game’s monsters and accumulates loot when victorious.

Tracked by a third-person 3D camera that follows the hero’s adventure throughout the game’s many different levels, every spin is a new journey through a different level with a random number of enemies and a mystery loot-based outcome for each win. Each victory awards players with loot divided by rarity: common, magic, rare, epic or legendary: convertible into an instant money outcome.

Despite the RPG elements and immersive gameplay, Dungeon: Immortal Evil stays true to its slots-based origins – all wins and losses are RNG-based, no skills or knowledge can help – it all comes down to the luck of the spin and the RNG algorithm.

In place of free spins, and to unlock bonus achievements, players must battle their way through a number of Dungeon spaces, fighting with enemies who protect the final level’s boss. After entering the portal into the Dungeon players must bravely vanquish a series of opponents culminating in a showdown with the final Boss, where a bet multiplier of up to 5000x can be won.

Every bonus level has an RNG determined reward, equal to money. Once a player is victorious, a chest appears which contains a random selection of a weapon, armour upgrade or health potion.

Commenting on the launch of the industry’s first ever RPG slot, Ivan Kravchuk, CEO of Evoplay Entertainment, said:

“At Evoplay Entertainment we’re always looking to push the boundaries of what’s possible when it comes to gaming. The result of over a year’s dedication from our fantastic team, Dungeon: Immortal Evil is designed for the next generation of player who values an immersive experience beyond the typical ‘spin and win’.

“As the industry’s first RPG (think first-person adventure) slot, we’ve had to start from scratch when it comes to building it from the ground up. Everything from design to the game’s mechanics – it has literally been a labour of love for us to create something that can be called truly new in the industry, and we can’t wait to see what our players make of it.”

Having gone from strength-to-strength since, Evoplay Entertainment now boasts a 70+ strong portfolio of slots, table, and instant games. The developer plans to cement its innovative reputation further by continuing to unveil some of the industry’s most advanced slots at headline events throughout the year. 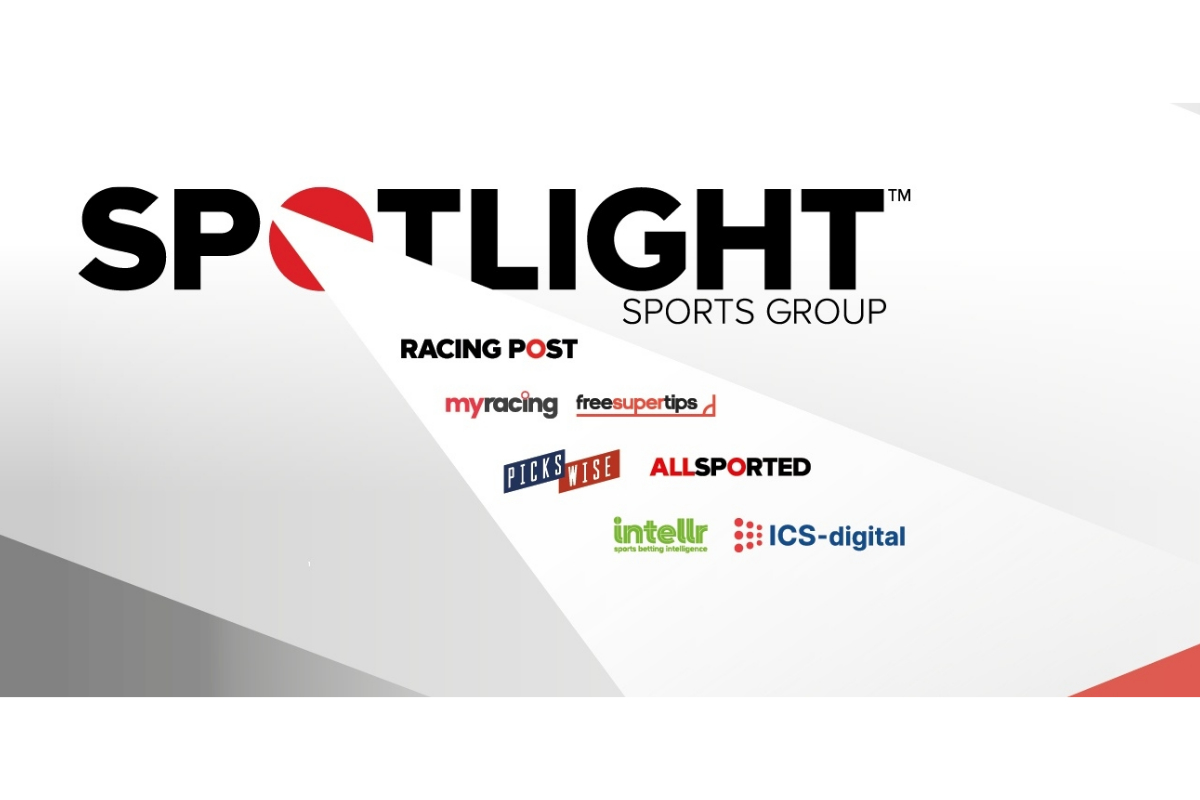 Louise Agran is leaving her role as Chief Marketing Officer at the Spotlight Sports Group, home to the Racing Post, at the end of September and will be replaced by Gethin Evans, currently Digital Marketing Director.

Agran said ‘After twelve years, I have decided to take voluntary redundancy after the most incredible time working for the Racing Post and latterly the Spotlight Sports Group. It has been a total pleasure and privilege to work with such amazing people on fascinating brands and I have enjoyed more or less every single minute of it. Despite my huge affection and passion for the company, the time is right for me to move on and do something else. My very talented colleague and friend, Gethin Evans, will take over as Chief Marketing Officer for the Spotlight Sports Group from 1st October and I know he is going to do an absolutely brilliant job.’

Evans said ‘I am delighted to be taking the role of Chief Marketing Officer at Spotlight Sports Group. I believe we are set up to accelerate growth further thanks to the fantastic work Louise has done to help transform the business during her time here. From starting the digital transformation, integrating the businesses we acquired and building a high-performance culture – she leaves a formidable legacy. We have big plans across our brands, both in terms of content and partnerships and I can’t wait to get going.’

Spotlight Sports Group is the home to highly successful brands in the betting world including Racing Post, one of the most recognised and trusted names in sports betting with more than 34 years of intimate industry experience. The global reach and sports expertise are further strengthened by My Racing, Free Super Tips, Pickswise and Intellr. The specialist international agency services, ICS-digital and ICS-translate, help improve clients’ effectiveness in the marketplace by driving extended reach and increased traffic through performance marketing and by providing expertise in SEO, content marketing, digital PR and translation services. 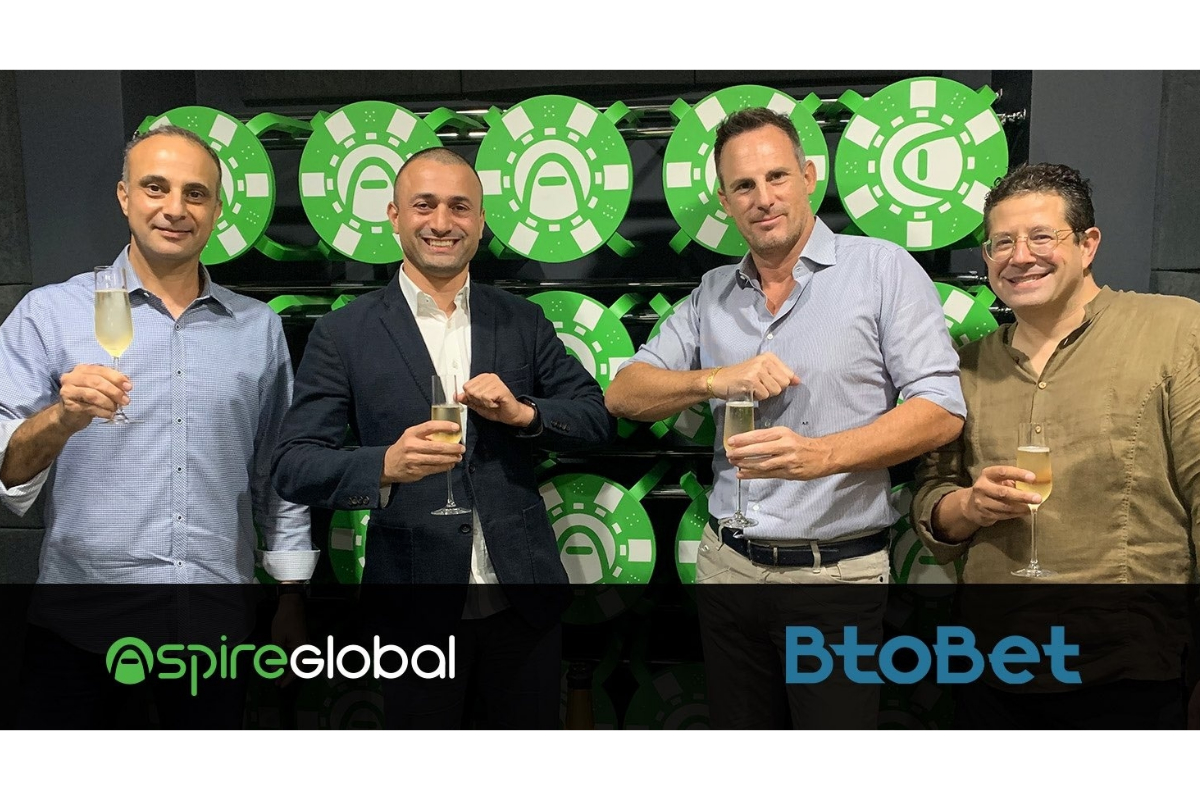 Aspire Global has signed an agreement to acquire 100% of the shares of BtoBet Ltd, a leading B2B sportsbook and technology provider. The acquisition of the sportsbook constitutes a key part of Aspire Global’s growth strategy since it is a major step in creating an offering that covers the main elements of the B2B iGaming value chain. Together with the acquisition last year of the leading aggregator and games studio Pariplay, the purchase of BtoBet’s sportsbook platform positions Aspire Global among the world’s leading iGaming suppliers.

The purchase price is €20 million in cash of which €15 million at closing and €5 million twelve months after closing. In addition, there is an additional consideration based on BtoBet’s performance two years after closing. This consideration is seven times BtoBet’s EBIT in the second year from closing date minus the purchase price of €20 million. In 2019, BtoBet had revenues of €4.4 million and an EBITDA of €1.5 million and in the first six months of 2020 revenues were €3.1 million and EBITDA €1.2 million. The transaction is supposed to be closed during Q4 2020 with material positive effect on Aspire Global’s EBITDA as of 2021. The acquisition is not expected to have any material effect on the financial results in 2020. BtoBet is headquartered in Gibraltar and has almost 100 employees, the majority of which are based in the offices in Italy and North Macedonia.

BtoBet has 32 operators on its platform in Europe, Latin America and Africa. The company is a leading provider in Latin America and Africa and with the acquisition Aspire Global, with its broad presence in Europe and recent establishment in the US, takes a prime position also in these two growing markets. BtoBet’s platform, named Neuron 3, provides operators with the core technology for a player-centric environment to facilitate their player interaction in placing their bet in any channels of choice. The result is a betting experience with an accentuated entertainment perspective based on the seamless transition of the core technology which adapts to various scenarios related to the players’ behaviour through any channel, any jurisdictions and markets’ requirements.

Tsachi Maimon, CEO of Aspire Global, said: “Aspire Global now enters the sports betting arena with storm strength. With the acquisition of BtoBet we have become a true global B2B company which owns and provides an iGaming platform, sports betting, casino games and games aggregator as well as managed services for all continents and markets. Aspire Global can now compete for any deal, big or small, that exists out there.”

Tsachi Maimon continued: “This is a perfect match. We are impressed by the qualities of the Neuron Sports platform and in addition we will get access to new growth markets, new potential big deals and new opportunities.”

Alessandro Fried, founder and shareholder of BtoBet, said: “I am truly enthusiastic by the opportunities we see by becoming part of Aspire Global, the powerhouse for iGaming operators. With our joined forces we will take this new global iGaming offering in every corner of the earth. We have been in the industry for a long period of time and finally we met the perfect partner that matches our vision and with which we can build a stronger presence globally.” 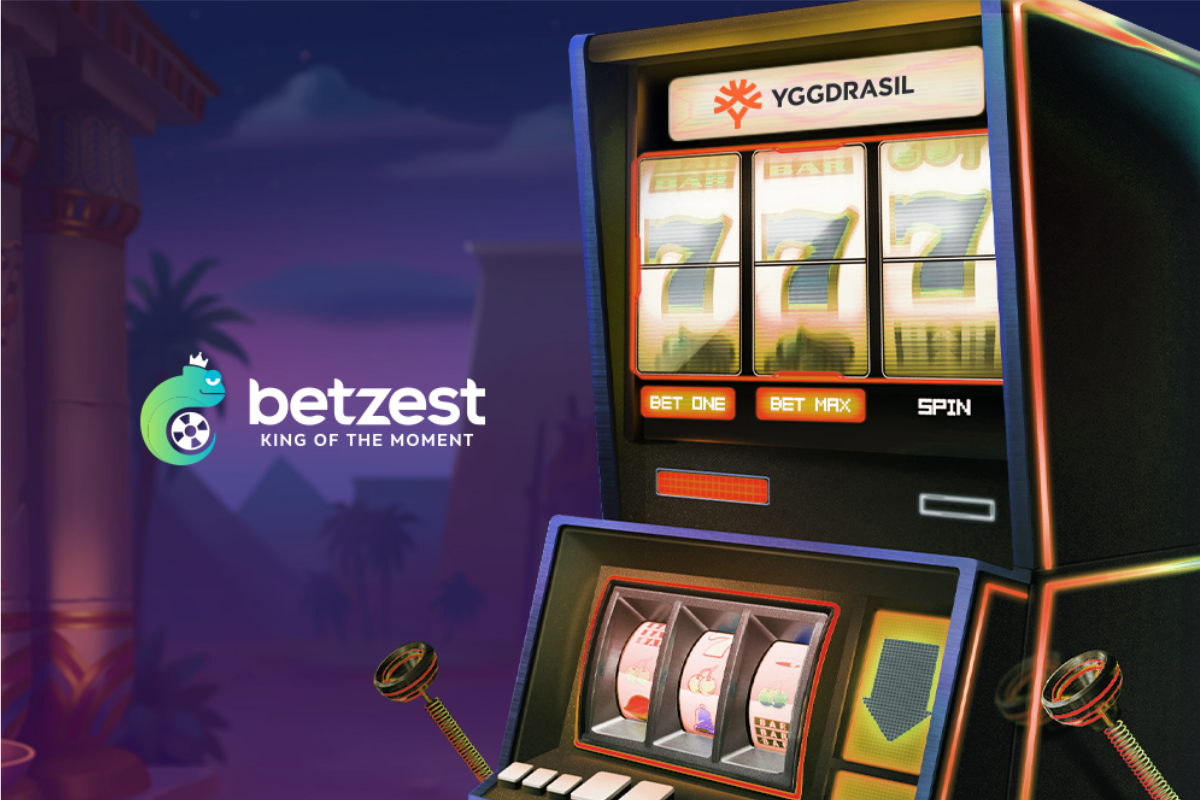 After adding to its portfolio MGA license, many key payment methods and top online casino providers Betzest now offers a great selection of casino games to ensure amazing entertainment, user experience and adrenaline to their players. This is another significant step in Betzest™ rapid expansion and their performance in 2020 demonstrates that Betzest is becoming stronger than ever. The company is looking forward to announcing more partnerships with other leading providers lined up for the end of Q3, 2020.

Marius Filip, Founder/CMO at Betzest, said: We are thrilled to conclude another partnership with leading casino provider Yggdrasil™. We’ve listened to our players and with this superb addition, we straighten our large client provider’s base in our key strategic markets. We trust that their high quality, innovative games, BOOST™ tools and gamification features will play an important part in taking Betzest™ casino to the next level. We are pleased to welcome them to the Betzest family and look forward to working with them closely for many years.
To celebrate in style, we are rewarding all our players with a fantastic deposit bonuses, Free Spins, Tournaments and No deposit Bonuses.
A big thank you to our Betzest team for this great achievement and to Yggdrasil™ team for their continuous support during the process. We’ve had an extremely fruitful 2020 already, with a remarkable collection of world-class casino providers and payment methods on the way, I’m certain the best is yet to come.

About Betzest:
Betzest is your leading premier Online Sportsbook and Casino operator run by a team of experienced i-gaming experts.
Due to its unique product and marketing proposition, Betzest is rapidly establishing itself as one of the most trustworthy and reliable online gaming company.
At Betzest players can now take advantage of exclusive sports & casino campaigns, free spins giveaways and even surprise gifts offered to VIP players, by using Bitcoin Core (BTC). Betzest has a Top Notch sportsbook powered by BetRadar along with Casino powered by NetEnt, Microgaming, Play’nGo, Yggdrasil, Pragmatic Play and a separate Live casino powered by Evolution Gaming™, E-sports and Virtual sports sections. Alternatively, if sports and casino aren’t your thing you can bet on politics instead.
Choose from more than 20,000 live sports events monthly, Blackjack, Online Slots, Roulette, Video Poker, and get an amazing entertainment under reputable MGA license.