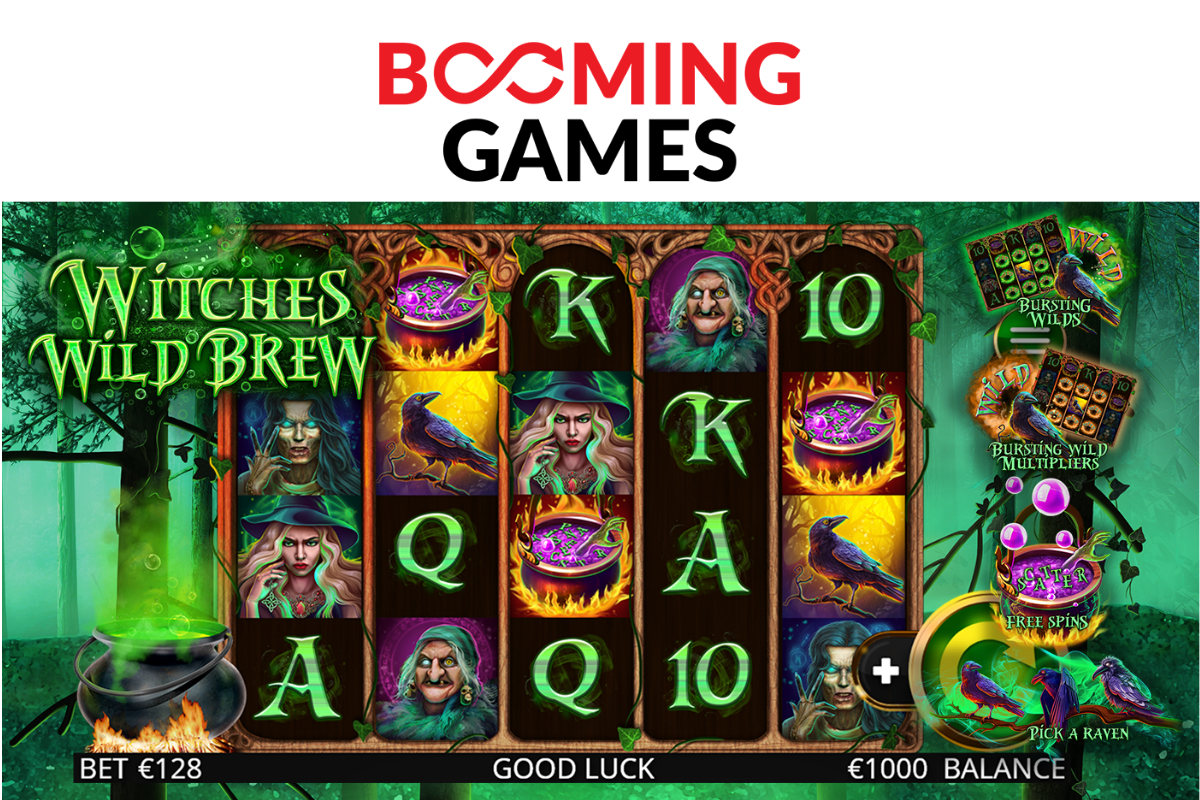 “Double, double toil and trouble; Fire burn, and cauldron bubble” Are you brave enough to go spinning in the woods all alone?

Booming Games has gone spooky with their latest game ‘Witches Wild Brew’. But all may not be as it seems… A smoking cauldron, far from bringing dread, brings reward, as it unleashes wilds across the reels. Sinister ravens bring choices to the player, empowering them with coin, while Bursting Wild Multipliers add to the rewards. Keep your wits about you though, as the woods get even creepier at night, while you play out your dynamic Free Spins; willing them to go on as you win additional spins; while every fibre of your body screams “Runnnnnnnnn”.

This 5×4, medium high volatility slot, has a whopping 40 paylines. Coupled with a random pick & click feature where you can win an immediate 30 times your bet; the game is full of differing wilds to match the spirit of our 3 witches. Just be careful not to become bewitched.

Shane Cotter, Booming Games’ Director of Product, says “This is without a doubt one of the most fun and spooky ‘halloween games’ I’ve played to date. The high volatility coupled with the huge win potential of the Bursting Wild Multipliers makes this a game to be loved by players long after the Halloween season has passed”. Leading British video game publisher and developer Jagex, creator of the iconic living game RuneScape franchise, today announced that it will be working with indie developer Brendan Malcolm to publish Melvor Idle under the Jagex Partners banner. Currently in Early Access, Melvor Idle is a game heavily inspired by Jagex’s renowned RuneScape franchise and has already been downloaded more than 600,000 times across Steam, App Store and Google Play.

The brainchild of Australian solo developer Brendan Malcolm, a player of RuneScape since his youth, Melvor Idle was devised as a means of reimagining the core components of the RuneScape franchise in a way that they could be enjoyed casually, fitting around the busy schedule of his adult life. Taking inspiration from the setting, skills, combat and mechanics of RuneScape, he distilled the core components down into an idle game in the same vein as games such as Clicker Heroes and Egg Inc.

Jagex first became aware of Melvor Idle in early 2020, and was hugely impressed with the game, realising there was a significant opportunity to help support the game’s future development, and to reward a fan-made passion project and bring it to the attention of RuneScape players around the world. The game will come out of Early Access and release officially this November.

Chris Pfeiffer, Director of Product Management for Jagex Partners, said: “We are incredibly excited to be publishing Melvor Idle. Every once in a while, we come across a game and a developer that is so well aligned with our core values that it seems a natural fit for Jagex Partners. With so many of our staff being fans of the game, and seeing what Brendan has been able to achieve as a solo developer inspired by the games we have been developing for 20 years is truly magical. We very much look forward to using the skills and experience we have at Jagex Partners to support the future development of Melvor Idle, leveraging our marketing, communications and localisation resources to make sure the game reaches the widest possible audience and its full potential.”

Brendan Malcolm, Games by Malcs founder and the creator of Melvor Idle, said: “Being able to work with Jagex directly on this has been a dream come true. I never would have imagined when I started development on Melvor Idle back in 2018 that I would eventually receive the support of the very studio that inspired me in the first place. The support this partnership has provided me will not only enable me to reach even more players with Melvor Idle, but will help me really establish Games by Malcs as an up-and-coming studio with an office in Perth, Australia. I can’t wait to work with Jagex on making Melvor Idle an even bigger success than I had hoped for.”

Jeff Pabst, Vice-President of Third-Party & Partnerships, said: “Jagex Partners continues its focus on becoming the go-to publisher for living games developers around the world. However, great community-led games like Melvor Idle have inspired us to broaden our search for development partners to include games that represent the community-first ethos Jagex has always followed. We look forward to more announcements as we close out the year and push onwards to 2022 and beyond.” EveryMatrix announces the official launch of its Managed Services unit. The new division was established earlier this year and is led by Tom Dyson. The team’s mission is to provide 360° support to iGaming operators, enabling them to capitalise on opportunities to improve brand performance.

Tom Dyson is a knowledgeable gaming industry professional with significant expertise in team leading and management roles, having worked for companies such as Gambling Compliance, ProgressPlay, and Gaming Realms.

As a result, the services provide a comprehensive outsourced option for running your online casino or sportsbook, offering expertise in specific areas such as Marketing, Affiliate, CRM & VIP, Product Management, Payments and Fraud, Bonus Abuse Monitoring, and Customer Support.

Stian Hornsletten, Chief Commercial Officer & Co-founder of EveryMatrix, says: “Our company is constantly evolving and developing, and with the addition of the Managed Services solution, we reached another important milestone. I am sure Tom Dyson will do a great job leading the talented and brilliant team responsible for this project.”

Tom Dyson, Head of Managed Services, comments: “Marketing is among the largest costs for an iGaming operator so it’s vital that these businesses optimise the effectiveness of their marketing spend to achieve growth in one of the most competitive corners of the internet.

“Because of this, and the labyrinth of regulatory challenges presented to the modern operator, many traditional marketing agencies struggle to make the most of their client’s budgets. Our new team can solve this problem by combining our industry experience and unrivalled product expertise but most importantly through a shared measure of success with our clients.” 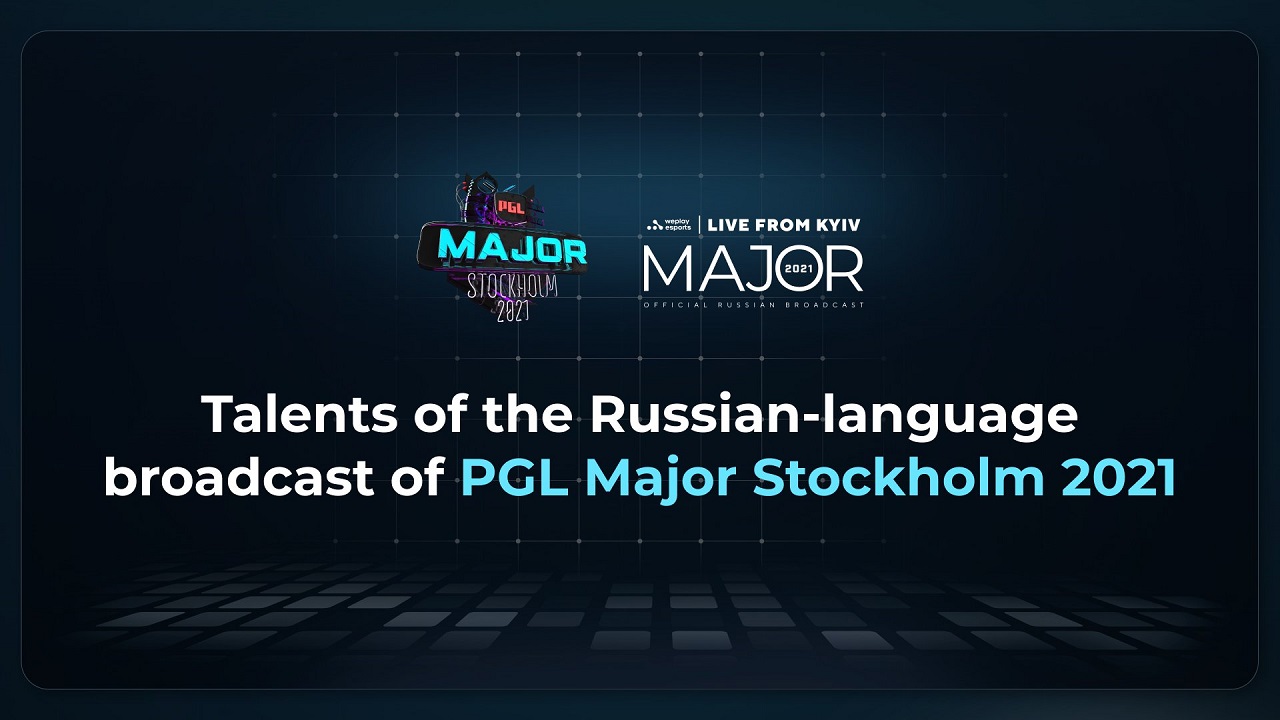 Meet the host, commentators, and analysts who will bring you the spirit of the main CS:GO tournament of this year in Russian.

WePlay Esports is happy to announce the talent crew of the official Russian-language broadcast of the PGL Major Stockholm 2021. The team will be working from the WePlay Esports studio during all the tournament stages, from October 26 till November 7. The total prize pool of the competition is $2 million.

Talents of the Russian-language broadcast of the PGL Major Stockholm 2021:

“The PGL Major is an outstanding event in the world of CS:GO. It’s been two years since the last Major, and the community is really looking forward to such a big day. For me personally and for WePlay Esports as well, this is a very important event in which we play a key role — the role of the main broadcaster in the Russian-speaking region. I encourage the whole community to come to us for the broadcast. We have gathered great talents, we have a high-quality production, and the teams will provide a lot of interesting action,” says Oleksii Maletskyi, talent at WePlay Esports.

Tips to Help You Choose the Best Canadian Casino

Why are German Casinos the Best?