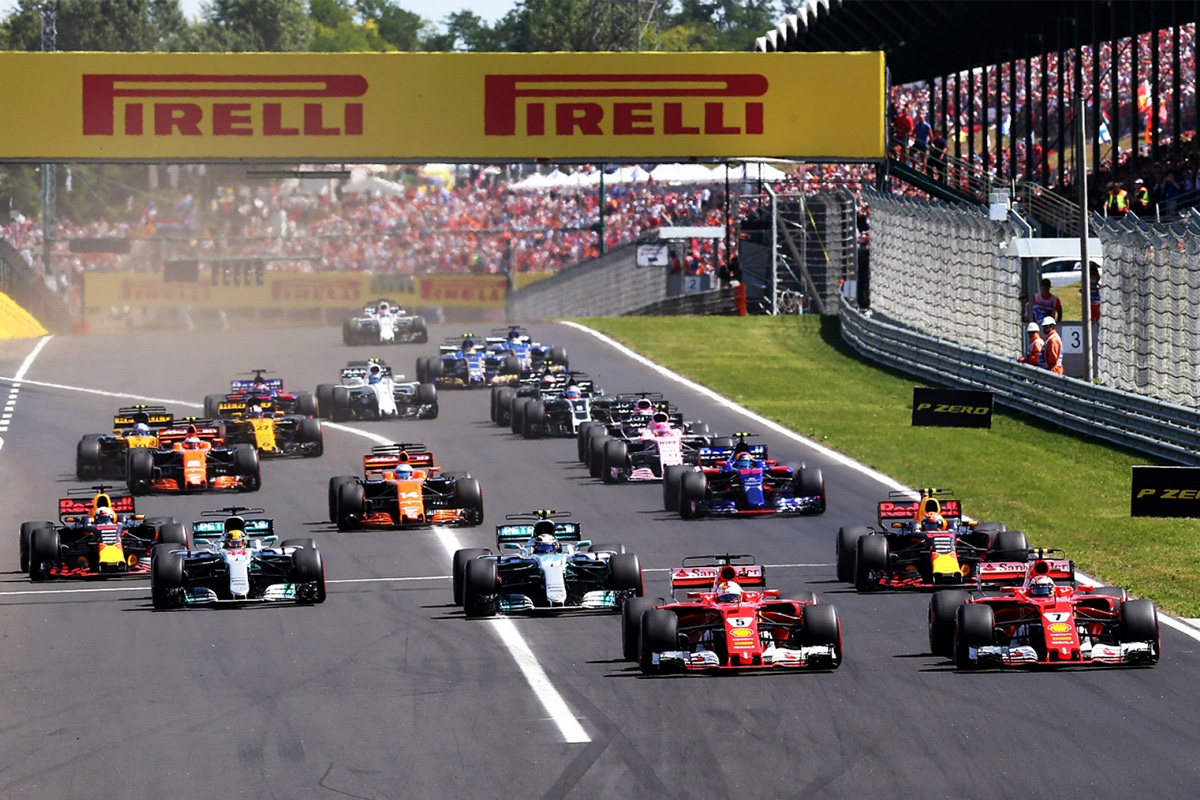 Formula 1 drivers Alex Albon, Antonio Giovinazzi, George Russell, Nicholas Latifi and Charles Leclerc will be joined by stars from cricket and football for this weekend’s virtual race at the Interlagos Circuit.

England cricketers Stuart Broad and Ben Stokes will take to the grid for this weekend’s Virtual Grand Prix alongside A.C. Milan captain Alessio Romagnoli, where they will battle it out alongside Formula 1 stars in the fourth virtual race of the season, with more names to be announced in the coming days.

Broad, who will be racing for Scuderia AlphaTauri, will be looking to beat his England teammate Stokes, who is racing in his second virtual Grand Prix for Aston Martin Red Bull Racing alongside Alex Albon.

Sunday’s race will fall on the weekend originally scheduled for the 2020 return of the Dutch Grand Prix, however as Circuit Zandvoort is not available on the F1 2019 videogame, the choice of circuit was left to a fan vote on social media. Brazil’s Autódromo José Carlos Pace, also known as Interlagos, emerged as the clear winner, securing more 50% of the 40,000 votes cast. Drivers will join the race remotely, with a host broadcast live from the Gfinity Esports Arena from 6:00pm (BST) on Sunday May 3.

The Virtual Grand Prix Series has proven immensely popular with fans around the world with the Bahraini, Vietnamese and Chinese virtual GPs cumulating over 12.9m views across F1’s digital platforms. When combined with television estimates, more than 16m people have tuned in for the three races to date.

The broadcast which will be available on the official Formula 1 YouTube, Twitch, Weibo and Facebook channels, is expected to run for 1 hour 30 minutes, with a qualifying period where grid positions will be determined based on the drivers’ fastest lap time, followed by a 28-lap race. The Virtual Grand Prix will

also be broadcast live with international broadcast partners in over 100 countries including in the UK on Sky Sports, in the US on ESPN, and FOX Sports Asia across Southeast Asia.

The F1 Esports Pro Exhibition race will precede the Virtual Grand Prix – and is set to begin at 5:00pm (BST). The broadcast will be available on the official Formula 1 YouTube, Twitch and Facebook channels as well as selected TV broadcasters and is expected to run for 1 hour.

“We are delighted that so many fans are watching and engaging with the F1 Esports Virtual Grands Prix. The viewership continues to go from strength to strength, outlining the growing success of the races and the wider potential of Formula 1 in esports. Furthermore, we are thrilled to welcome more stars from outside the world of F1, to complement our strong F1 and motorsport driver grid, and use this opportunity to link up with other sports as we all stand together to give fans something to cheer about during these difficult times.”

The clock is ticking for land-based lottery operators 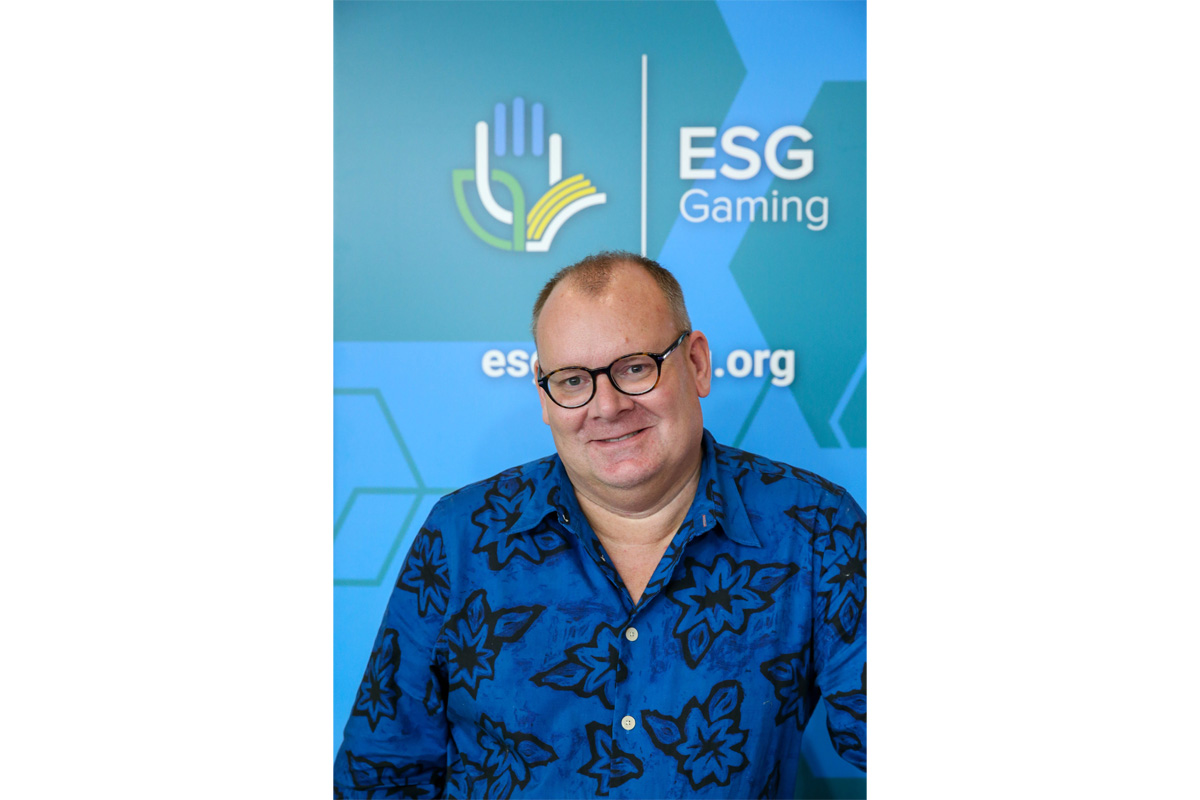 The Esports Arena at ICE London will celebrate a first on Wednesday 8th February when it hosts the premiere of Ironclad; a short documentary style film produced by ESG Gaming.

Shot on location in Dundee, Salford and across London the film explores the issue and impact of digital and tech inequality on the space, seen through the lived experience of players and the broader esports community. Ironclad features interviews with the likes of KingJae, the David Beckham co-owned Guild Esports, Dundee & Angus College, EXCEL Esports, and Esports Youth Club amongst others.

Ironclad producer Sam Cooke, who co-founded Esports Insider and the WFH League, stated: “Digital and tech inequality in esports represent serious issues which actually discriminate against huge swathes of the population and limit accessibility at an entry level.

“The purpose of Ironclad is to provide an opportunity for some of those in the space to share their stories and their lived experience in order to drive awareness of these key issues and to, hopefully, serve as a catalyst for change. The general consensus amongst those interviewed was that more can be done, and that accessible bricks and mortar gaming facilities are one part of this puzzle.”

Lee Willows, founder of ESG Gaming added: “Raising awareness around digital and tech inequality, player protection and inclusivity are central themes for ESG Gaming. I am incredibly grateful to Invest in Film, Lionscreed and Esports Insider who have bought the community together to contribute their unique insight, experience and knowledge to our short, documentary style film. Ironclad is the first of several short films from ESG, which will seek to raise awareness and seek to improve access and inclusivity.

“I would also like to thank the team at Clarion Gaming for firstly having the vision to establish the Esports Arena in the first place but also for supporting what we are trying to achieve at ESG Gaming and for providing us with a superb event at which to launch Ironclad.”

A subsequent screening of Ironclad is scheduled to take place at ESI Next Gen, an event focused on uniting leaders across education, video games and esports, at the University of Warwick across 22nd-23rd March.

Incorporated in August 2021, ESG Gaming is a regulated, not-for-profit Community Interest Company. The ESG mission is to ensure that consumers worldwide possess the skills, knowledge, resilience and tools to engage with digital entertainment in a safe, responsible, positive and inclusive manner. ESG Gaming develops, delivers, and evaluates educational products and commissions research which have a focus on digital and tech inequality, player protection and inclusivity within gaming and esports. 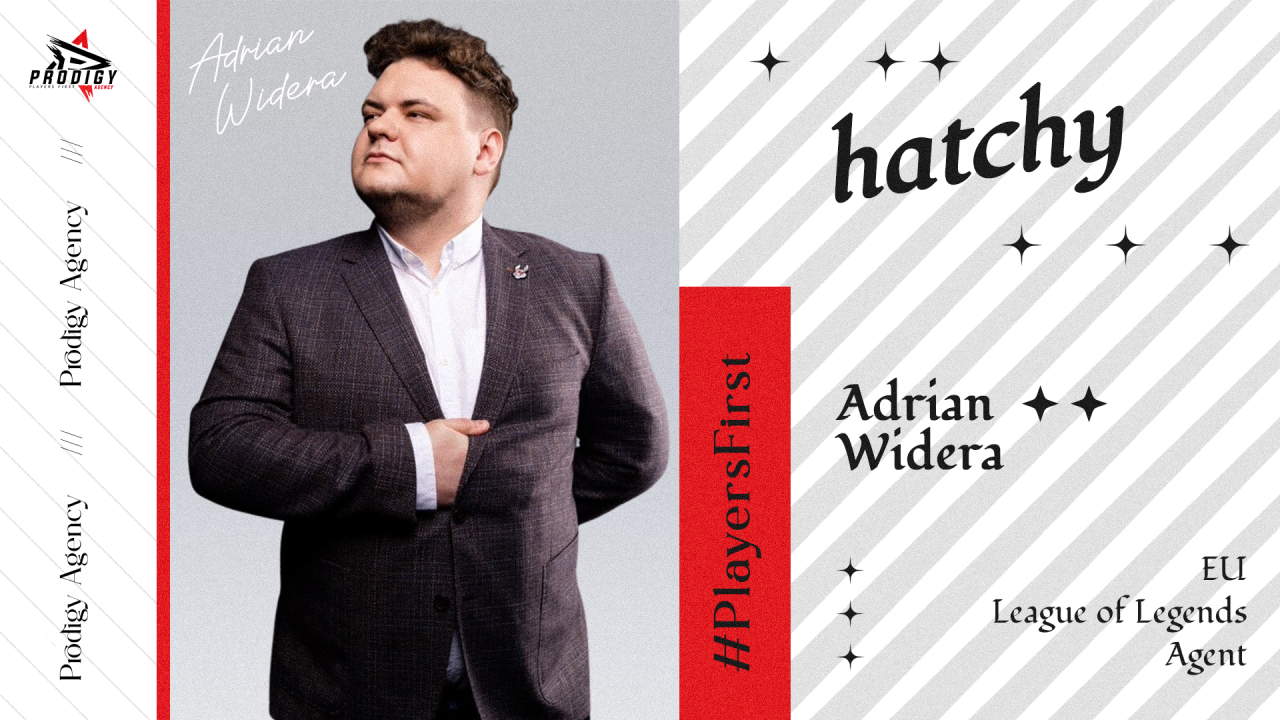 Prodigy Agency, a leading esports representation agency, has appointed Adrian “Hatchy” Widera, former coach in regional leagues and more recently Sports Director at Misfits Gaming in LEC and LFL, to the role of LoL Agent to expand its initiative to protect and support the players on the game.

Prior to joining Prodigy Agency, as a prominent figure in League of Legends, Adrian Widera served as a Sports Director for Misfits, spearheading their LEC and LFL operations. He was also deeply involved in the LoL ecosystem and development, being a coach from 2014 to 2021 in Poland, France and Turkey, and having created multiple Scouting Grounds and Academy projects that helped future top tier players get attention and spotlight.

With such an extensive experience and knowledge of the game; being known for promoting and recruiting young players to the starting rosters of the team, and for having amazing talents to scout future prodigies, Adrian is a perfect profile to understand the needs and to support the League of Legends’ players from all angles.

Using the constantly growing global resources of Prodigy Agency and joining a team of more than 35 collaborators around the world, he will be working on expanding its LoL operations and #PlayersFirst mindset all over Europe, with a focus on scouting and developing the prodigies of tomorrow.
—
“Adrian has the perfect profile and skill set to become a prominent Agent and expand our initiatives on League Of Legends.
He has a massive experience and truly cares for the players as much as we all do at Prodigy Agency.

He will perfectly complement our current LoL department and allows us to develop more initiatives by pushing our Players First values forward.

I’m really proud that Adrian chose to join our family and I’m confident that we are building the absolute best team possible to protect and support the players!» -Jérôme Coupez, Founder & CEO – Prodigy Agency.

“After a successful time in Misfits as a Sports Director, I’ve been looking into other ways of helping and promoting players and coaches – this is what always gave me the most satisfaction in my competitive career. In my teams we often gave chances to young players, we ran academies and scouting grounds. And I know how difficult it is to get started without proper help or guidance when you’re still a very young player.

I want to take that experience from competitive League of Legends and make the best use of it for the sake of the players. Prodigy Agency was the best place to do so, with their motto of always putting the players first. Here we can count on a large amount of top-quality people who can help the talent not only with their professional career choices, but also marketing and day to day struggles.

If we can take some of the burdens that the players have to carry, we will allow them to focus more on performing and worry mostly about what is happening on the Rift. This is my goal, to be there for these young athletes’ day to day, to be someone they can always reach out to and talk to. And there was no better place to do it than the Prodigy Agency, with the largest number of experts on the market, ready to be there for the players every day.

Lastly, it is very important for me to continue looking for new talent, people who yet did not get a chance to shine on a professional vision. I am extremely happy that Prodigy Agency shares my views in that aspect, so you should expect us to come up with new projects to help the players get the spotlight and chance they have been waiting for!”
Adrian “Hatchy” Widera, LoL Agent – Prodigy Agency 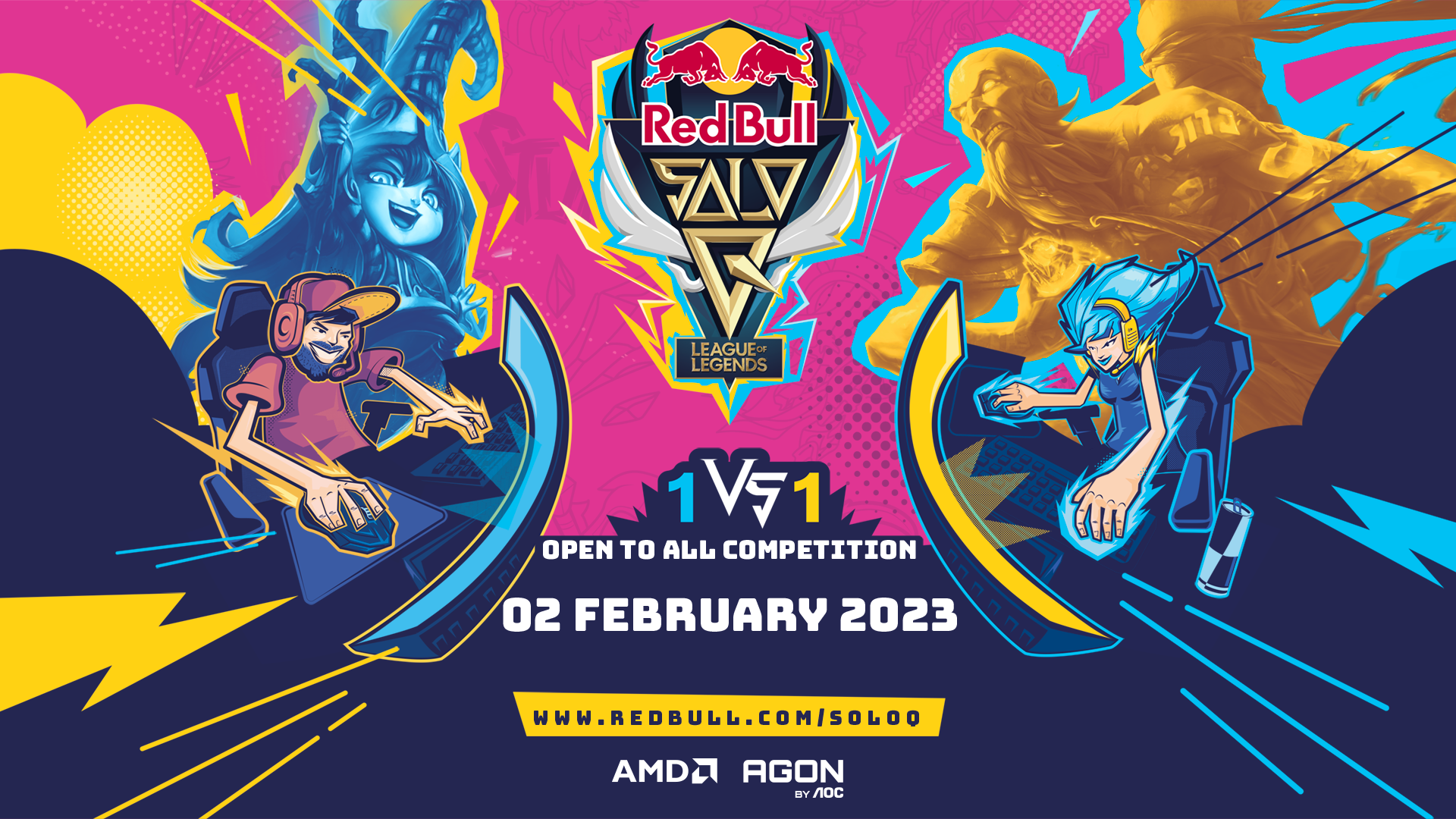